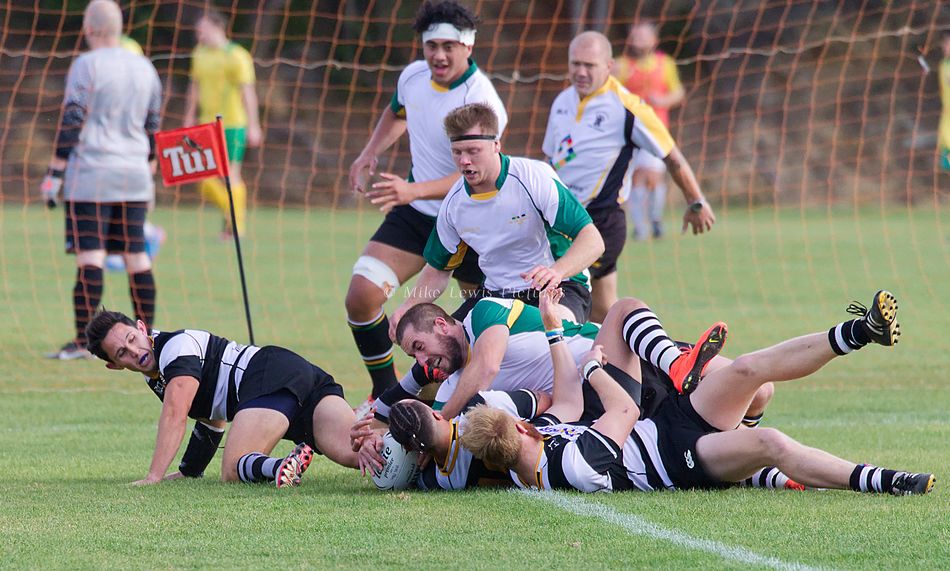 This match was an early season thriller. OBU won their fifth straight match and their 14th overall with a last-gasp 25-24 win over Ories.

Replacement OBU wing Maile Koloto scored in the corner with the last play of the game. Ories were leading 24-20 and looked to be holding on.

The fleet footed Tuga Mativa responded for Ories. OBU then took control and punished Ories’ errors by scoring three tries but failed to convert any of their tries.

Ories used the brisk northerly to control territory for most of the second-spell. James Procter kicked three long-range penalties for Ories and when Mativa scored his second try Ories were ahead.

OBU rallied and a long period of desperate play on the Ories goal-line eventually led to the winning play.

This result followed on from the previous year’s semi-final that had seen OBU win 20-18 and go on to win their maiden Jubilee Cup title.

OBU went on to win the 2016 Swindale Shield, finishing on 58 competition points, with Ories outright second on 51.

Later in the 2016 Jubilee Cup round-robin, OBU again beat Ories by one point – winning 25-24 – the same score as this match!

MSP topped the Jubilee Cup points table standings, but Tawa, Wainuiomata, Ories and OBU all finished equal on points and it was OBU that missed the semi-finals. Ories lost to MSP 24-3 in the semi-final, while Tawa beat Wainuiomata 16-10. Tawa went on to win their second title.

Try scorer in this match Hill made his Wellington Club Rugby debut in 2007 against the Wests Roosters in round one of that year’s Swindale Shield. Since then he has played 109 Premier matches for OBU (as listed in this website’s database).

Out of Wellington College, Hill spent two years in the New Zealand Secondary Schools’ side, where he helped the side to wins over Australia in both years. He played for Wellington XV sides in 2007 and Wellington age grade sides.

He also had a stint in Dunedin and played for the Otago NPC side, before returning to Wellington in 2012. He won his first Jubilee Cup with OBU in 2015 and was selected on the right wing for the Wellington Lions for the first time in 2015.

In the 2015 Jubilee Cup final, OBU’s maiden win, Hill won the Jim Brown Plate as the Player of the Final, scoring two tries.

Petone and Norths come out on top in close games