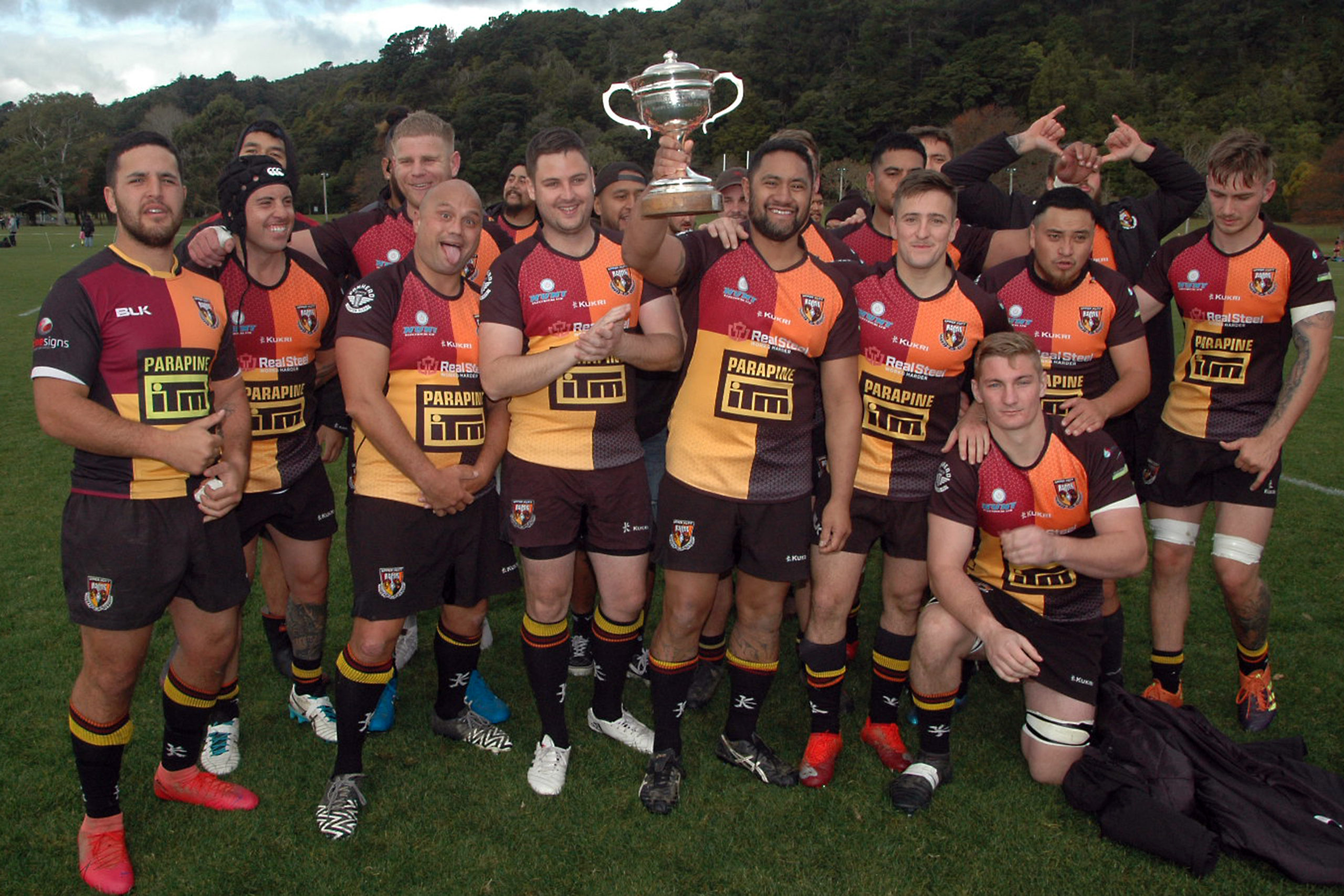 Above: The Upper Hutt Rams with the Men’s Premier Reserve Division 2 first round trophy, that they were presented with on Saturday. PHOTO: Peter McDonald

As well as the Rams (above), some more first round club rugby trophy winners were found on Saturday. Tawa (pictured below) were presented with the Premier Reserve Division 1 Harper Lock Shield, that they won the previous week:

The Ories Reserve Grade side wrapped up the first round Mike Copeland Cup. They won by default on Saturday so they will be presented with the trophy on Ories’ Old Timers’ Day on 12 June.

Midweek college rugby this Wednesday (these kick-off times may change on us, as they sometimes do, so old boys and rugby supporters attending these matches will need to confirm):

Round 8 Swindale Shield Premier club rugby matches at a glance (more details later in the week):

Draws: Look out for all college draws, including the First XV Premiership draw, to come out early this week and as soon as today. Plus lower grade second round club rugby draws.

Northern United No. 8 Luca Rees leads the Premier try-scorers with 8 tries, after scoring twice on Saturday against Wainuiomata.

Rees has scored two tries in each of his last three games and by this website’s records has scored 63 Premier tries in 83 Premier matches, for his current club Norths and previous clubs Petone and Ories.

Vince Aso scored a hat-trick and should have scored four tries, but passed the ball to first five Carne Green to score when over the line and took a quick tap penalty and passed to his wing to score when he probably could have barged over to score a fifth.

Tawa have been sporting a new ‘away’ jersey over the past two weekends, against the Wellington Axemen and the Upper Hutt Rams. It is a special jersey for away games and has the Tawa haka printed on the front.

A comprehensive performance from OBU’s forwards on Saturday. How would they go against a NPC pack? A couple of them already play for Manawatu and Hawke’s Bay and a couple more will be playing for the Wellington Lions, so fairly handy.

The Newshub crew arrived at Helston Park on Saturday not long before kick-off for the Johnsonville -OBU match. No park available for them though, so it seems they left for their next assignment.

No excuses for an off day with the boot – Marist St Pat’s Premiers fielded four players adept at kicking goals on Saturday. First five James Proctor kicked four conversions and replacement Andrew Wells one on Saturday. But fullback Aidan Morgan and wing Willie Schutz (who scored three tries) can also do the job as well as most out there.

Julian ‘the Bus Savea’ is now the Hurricanes all-time top try-scorer. He crossed for 2 tries in their win on Friday night against the Rebels, to take his tally to 57. He could still be surpassed by TJ Perenara before the season is out though. The list is:

It took 80 games for Richie Mo’unga to score his first career hat-trick. He scored 31 points in the Crusaders 63-28 win over the Reds on Saturday. The most points by a Crusaders player in a match is 31 by Tom Taylor v Stormers in 2012.

Toulouse became the first team to win the Heineken Cup five times. An account from the match here which involved a handful of Kiwis: https://www.bbc.com/sport/rugby-union/57214852

Further to the college draws in Wellington coming out early this week, Upper Hutt College (combined) have resolved to stay in Premier 2 for another season. It is understood there could be another school doing likewise, but Bond Banter awaits the draw like everyone else. If so, so much for the expansion of the Premiership from eight to 10 teams in recent seasons!

After three rounds of the Crusaders region First XV Championship, four of the five bottom sides are combined outfits and three of the four combined sides were last in 2020. Combined sides haven’t been without success though with Waimea Combined winning a respectable six of 13 games last year and Lincoln combined won eight out of 13 games in 2018.

In a First XV result from the Crusaders region competition on Saturday, Christ’s College beat the Mid Canterbury Combined XV 100-3. Not good when a private school in a city can win so easily over the Heartland Championship union combined First XV.

Three wins from 54 games. That’s the combined record for Australian Super Rugby teams on New Zealand soil dating back to 2015. Over the same time period, New Zealand teams have played 60 times in Australia, resulting in 44 victories.

In the Emperor has new clothes file, if this continues, then Bond Banter asks again what is the point of Super Rugby in the post-covid world? Has the concept of Super Rugby had its day, when there is the NPC competition sitting there waiting to be revived? What about inviting one or two Australian teams into the NPC? What about other ideas like setting up a professional NZ team in Europe like London Kiwis or something, to act as a partial sieve for the exodus of professional players heading overseas (why is this such a bad thing)?

11-1 in the international Sevens matches over this past weekend, Black Ferns 5-1 and the men 6-0.

The Panasonic Wild Knights have been 72-11 since 2013, winning four Japan Top League titles. Former All Black Robbie Deans is coach.

The verdict into the OBU v MSP incident resulted in a retraction of the assertion by MSP that OBU is a racist club and an expression of “regret and dismay at the events that occurred towards the end of the match.” However the WRFU statement didn’t highlight any specific events of the incident nor did it impose any sanctions on the guilty parties. The statement continues, “The clubs have confirmed their continued cooperation with the WRFU in improving side-line behaviour across all grades.  From now on there will be better patrolling of side-lines to proactively call out bad behaviour and better manage issues relating to alcohol consumption at grounds.” What will this look like and how can we trust OBU, MSP and WRFU to deliver better results with no apparent punishment for this event and the harmful posturing in the past fortnight by OBU and MSP?

The Reefton Rangers have nearly 50 players registered this season, five years after being forced to fold due to a lack of numbers.

It is no mean feat, given the town itself has less than 1000 residents, but their passion for the game and love of their town has seen the community band together to bring the club back from the abyss.

For 50 years the club had been competitive, even winning the Buller Shield in 2006. But 10 years later they folded.

A referee crisis in Dunedin club rugby, with it being reported last week that some referees are officiating three games a day on a Saturday just to ensure the games can be played.

Petone’s two former Willies, Tufui and Fine, almost combined to pull off a win or at least a comeback draw for their Harbour club against Dunedin on Saturday. Down 14-26 heading into the final 10 minutes, the former latched on to a break by former OBU loose forward Teariki Ben Nicholas and the latter grabbed an intercept and sprinted 85 metres to make it 26-26. But Dunedin kicked a late penalty to win 29-26. For Dunedin, former St Pat’s Town wing Oscar Schmidt-Uli was an earlier try-scorer.