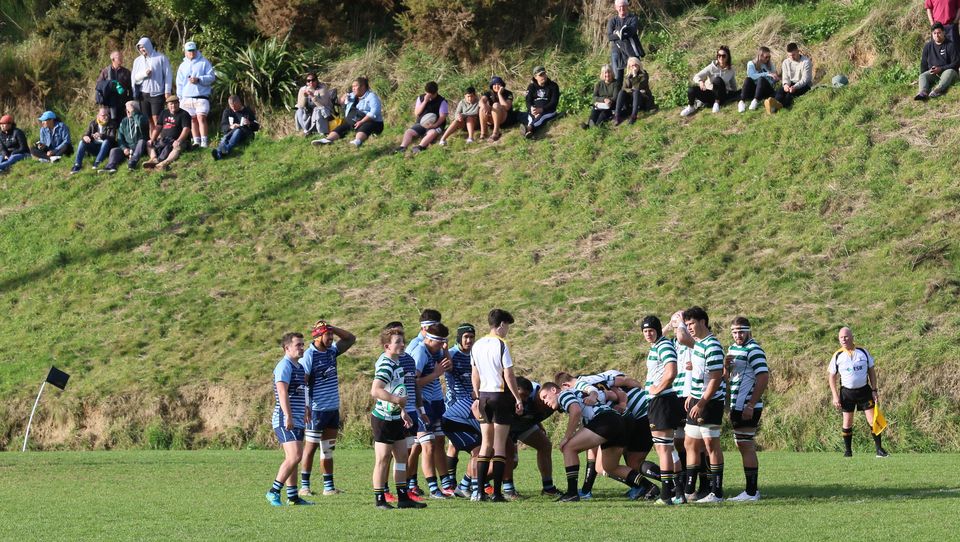 Old Boys University maintained their lead at the top of the standings with a 59-0 win over Johnsonville, but the Swindale Shield points table is well poised heading into the back end of the first round Premier competition.

UPDATED: Wainuiomata and Poneke won important wins today in the Swindale Shield, to keep themselves in the mid-table hunt for Jubilee Cup places.

In the seventh round of 13, Wainuiomata came from behind to beat Northern United 25-24 at home at William Jones Park – with veteran player/coach Daniel Farani coming off the bench to score the winner in the 80th minute –  and Poneke snapped a five-game losing run to beat Paremata-Plimmerton 45-26 on the latter’s Old Timers’ Day at Ngatitoa Domain.

These wins and losses for teams above them heading into today, Norths, Oriental-Rongotai, the Upper Hutt Rams and Johnsonville, has tightened up the points table and set up a super-competitive second half of the competition.

OBU Black won the Colts Division 2 title, holding off Wainuiomata 33-27 at Nairnville Park. OBU Black finished equal first on points with runners-up the Avalon Wolves, who beat Paremata-Plimmerton 31-30, but OBU joined their Green team as Colts first round champions by virtue of their win over Avalon when they met earlier in the round.

The Upper Hutt Rams won the Men’s Premier 2 Division 2 first round title with their 62-0 win over the Wellington Axemen today. They had to win with a bonus point to win the title outright over Stokes Valley, who finished second with their 41-29 win over Paremata-Plimmerton.

There were also some key college matches today, in the final weekend of grading before the competitions start next week.

There were four grading games to confirm qualifying for the First XV Premiership. These saw Porirua College beat Aotea College 31-29, St Bernard’s College beat Wairarapa College 42-14, HIBS beat Tawa 45-19 and Mana beat Paraparaumu College 57-5. However, it is understood that Upper Hutt College (who qualified last week) have opted out of taking their place in the Premiership so Aotea have taken their place.

Silverstream won the game by defending stoutly on their line just before half time and scored a good try just after the re-start.

In the Swindale Shield, Northern United led Wainuiomata 24-20 up to the very end by scoring four tries, to Luca Rees (2), Campbell Woodmass and Parekura Lalaga.

Wainuiomata had scored two tries but stayed in the game by also kicking two penalties up to that point, before they crossed at the death to win and win the Alf Keating Memorial Trophy.

At Ngati Toa Domain, Poneke pulled clear of Paremata-Plimmerton in the second half, after the home side were in touch and just a try down until early in the second spell.

Poneke had opened the scoring with two converted tries, to Greg Foe and Hauwai McGahan, but Pare-Plim had replied with two of their own to make it 14-14. Halfback Jimmy Lee-Hongara had then crossed on the half hour mark to put Poneke up 19-14 at halftime.

Swift running first five-eighth Pakai Turia scored and converted his own try early in the second half but Pare-Plim scored their third try to stay in touch. But three consecutive Poneke tries from the 57th to 73rd minutes took the game away from Pare-Plim.

The Hammerheads were rewarded with their fourth try right at the end, to earn their first competition point of the season.

OBU scored four tries in the first half with the southerly breeze in their favour, and five in the second half. Reflecting a dominant team performance, eight players scored their tries, blindside flanker Dominic Ropeti scoring a second half double.

With Wellington Lions coach Leo Crowley looking on, OBU’s forwards were clinical, their lineout particularly impressive, and they shut the Hawks out of the game for long periods.

The first two tries of the match were scored directly from penalties and lineouts in the corner, with lock Tiaki Fabish and openside flanker Josh Gimblett coming up with the first two tries. Outstanding Lock Caleb Delaney linked with No 8 Shamus Hurley-Langton to make it 21-0.  Approaching half time, centre Ty Poe crossed for their bonus point try.

Johnsonville went close to scoring on half time after a breakout and kick up-field.

Johnsonville made a couple of changes at the break and started the second half with a hiss and a roar but failed to make inroads as OBU also started emptying their bench.

At the Hutt Rec, a big crowd was on hand for Hutt Old Boys Marist’s Old Timers’ Day as their Premier team hosted the Wellington Axemen.

Like MSP and OBU, the Eagles made a fast start and had the game won and their bonus point in the bag when leading 28-7 late in the first half. This became 28-12 at the turnaround and they kept the pressure on the joint bottom side the Axemen throughout.

Avalon won their first game last week, but fell behind match 12-3 and 24-3 and later 46-8, the final score. For the Wolves, No. 8 Ale Peni scored their try and halfback Damien Madsen kicked a penalty.

At Maidstone Park, Tawa deserved their 38-19 win over the Rams, who played well and defended stoutly throughout, but Tawa were too strong and their scrum was a powerful tool for them.

The Rams had scored the first try after about 15 minutes through evergreen No. 8 Josh Hunt, and the remainder of the first half was close, with Tawa right wing Pepesana Patafilo and Tawa first-five Kemara Hauiti-Parapara scoring tries. The Rams kicked three penalties to fullback Tynan Barrett and they led 14-12 at halftime.

It remained tight in the second half and scores were locked up at 19-19 after tries to Tawa second five Lua Lualua and Rams right wing Hokianga Morunga with less than 20 minutes to play, before Tawa found an extra gear and kicked clear to win.

In Women’s matches, the opening day of the second round Division 1 competition saw first round winners Oriental-Rongotai sweep to a 45-7 win over Marist St Pat’s. Ories won eight tries to one, with Ivana Samani and Ayesha Leti-liga both scoring 2 tries.

In Women’s Division 2, the Old Boys University Impalas scored the first try of the match through their second-five Aria Ngarimu but Paremata-Plimmerton scored four tries of their own to lead 22-5 at halftime.

Paremata-Plimmerton had the wind in the second half and pulled clear from there, winning 62-5.

As well as the Rams beating Wellington 62-0 and Stokes Valley accounting for Pare-Plim 41-29, the other two Division 2 results were Wainuiomata beating Avalon 54-0 and Johnsonville beating Petone’s second team 32-31 in a thriller.

The Colts grade is perhaps the closest of them all. In Division 1, first round winners OBU Green edged MSP 29-26, Tawa pipped Ories 41-38 and HOBM beat Petone 32-22.

OBU Black led Wainuiomata 12-6 at halftime at Nairnville Park, but Wainuiomata struck with an intercept try just after halftime to take a 13-12 lead.

OBU replied with a converted try from a penalty and lineout in the corner to move ahead 19-13, but the next 35 minutes remained close and the Goats second team did enough to win and take the JRD Cup back to the Cambridge.

In the U85kg competition, leaders Eastbourne accounted for Poneke 51-5, their seventh straight win.