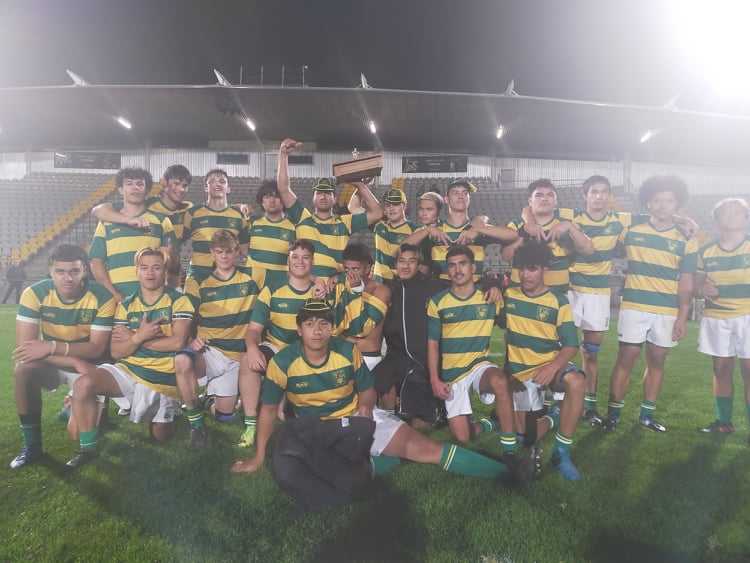 At the end of last season, Porirua College won the Beard Trophy off Aotea College in pouring rain. On Wednesday in calm, mild conditions they surrendered it to Mana College.

Porirua made a break from the opening kick-off which led to a penalty kick to open the scoring. They also scored the final points of the night with the last play of the game.

But in between it was all Mana College, who ran in seven tries.

Mana capitalised on a slew of penalties and turnovers, that led to most of their tries.

Porirua held on until the 25th minute before their line was breached, with Mana scoring back-to-back tries and then scoring their third on halftime to take a 21-3 lead into the turnaround.

Mana increased their lead early in the second half, with No. 8 Javarn Waters crossing for his brace after a turnover from 80 metres out and long build-up into the 22.

The try that sealed the game came after a Porirua breakout up to halfway that saw them concede a turnover. From the Mana scrum on halfway, swift-running centre Sione Baker broke up to almost where play had started, possession was recycled and the try was scored in the grandstand corner to make it 26-3.

Centre Baker scored the next try from another Porirua turnover 40 metres up, scorching up the far side touchline (below):

Mana extended their lead with a penalty, before scoring twice more as both sides emptied their benches.

Porirua kept trying and were rewarded with their only try of the contest on fulltime, to thunderous applause (below):

The next Beard Trophy match is scheduled for a fortnight from this Wednesday, with Bishop Viard College set down as the next challengers of the competition that is the ‘Ranfurly Shield’ for these three schools plus Tawa and Aotea College.

This coming Saturday, Mana College plays Paraparaumu College and Porirua College plays Aotea College in two key grading matches –  the winners of these games to progress to the Premiership competition that starts next weekend.

Read about the referee of this match Ethan Jefferson, who was profiled by Club Rugby’s Adam Julian on College Sport Wellington recently: