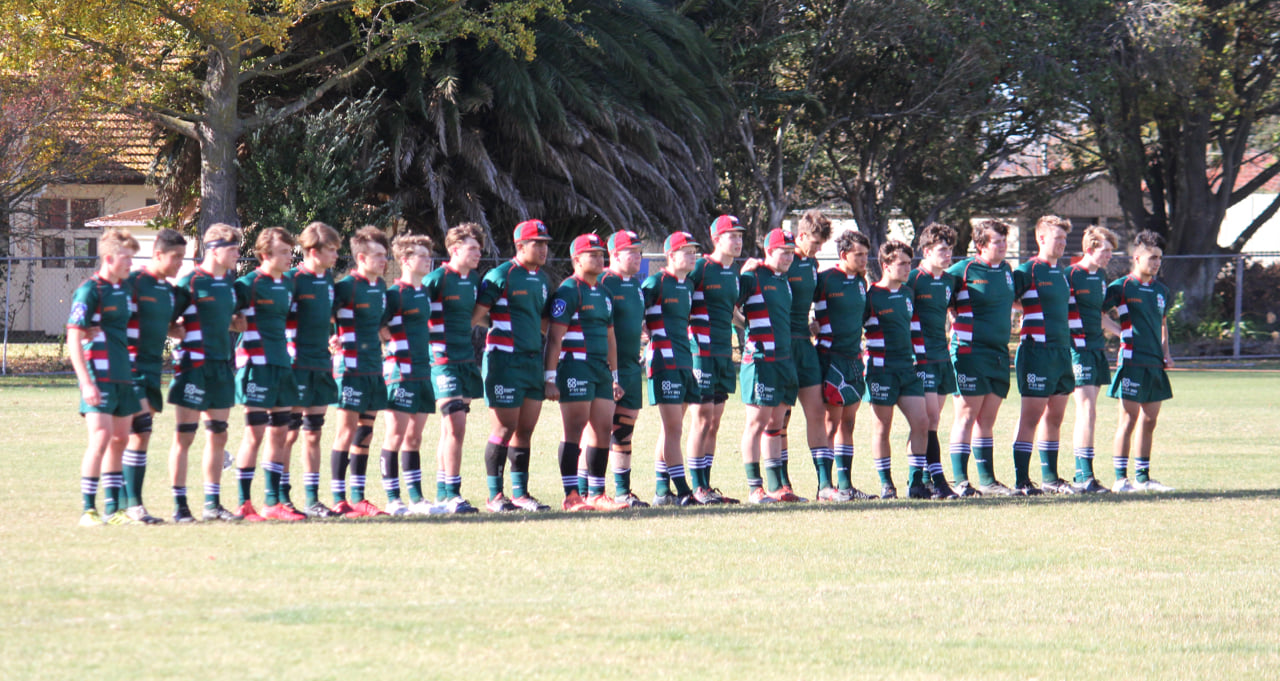 Wins early this week to the two visiting Wairarapa First XVs against Wellington schools. Accounts of both games – with similar scorelines – below.

The visitors turned 10-7 ahead, and with the assistance of the belligerent breeze. Rathkeale only applied its considerable advantage with about eight minutes remaining when first-five William Cole landed a 55-metre penalty in centre field. The mammoth goal made it 16-7 at which point HIBS were pushing boulders uphill.

Rathkeale dispatched HIBS back into their own 22 and the try from a series of gut busting ‘pick and goes’ had a sense of inevitably about it.

Earlier Rathkeale scored the first try when second-five Wiremu Herbert finished a break by barging past a smaller opposite. Rathkeale stretched HIBS defense often inaccurate with their clearances. The Rathkeale wings and fullback were illusive with the left winger later moving to halfback and scoring the last try.

HIBS relied upon sheer attrition to battle back into the contest. Loose forwards Tom Devery and Tom Brock were especially productive and the former scored a try make it 5-5. The conversion by first-five Ethan McKenzie which rebounded off the right hand upright and dropped over the crossbar was a beauty.

The lineouts were a lottery and an unfortunate bounce went against HIBS allowing excellent openside Tom Williams to scamper clear from just pas halfway and set up blindside Wiremu Bartlett.

Unfortunately, the wind prevented both teams from really expressing themselves, but the forward exchanges were spirited. Rathkeale had a clear edge out wide, but HIBS weren’t absent of lively moments.

HIBS play to qualify for Premier 1.

In contrast, it was a rather wet meeting for the Tawa and Wairarapa College 1st XVs in their sports exchange on Monday, with the visitors from Masterton winning 21-5, though the rain had eased slightly by kickoff from the monsoon-like downpour earlier in the day.

The early exchanges were even as both sides pushed the limits of what was possible in the conditions, and it was not until deep into the first half that the deadlock was broken by WaiCol when a dropped ball was toed through and scored off.

Tawa replied in the shadow of halftime when young first-five Chris Sei skipped through off the back of a 5-metre scrum.

WaiCol added two more tries after the interval as they took control, firstly through first-five Hayden Cooper and their third when a horrible error by the Tawa fullback was pounced on, and with an eye their upcoming games, both sides made a large number of changes across the balance of the match. The contest ended with Tawa camped on the WaiCol goalline but unable to cross it.

The axis of Cooper and second-five Junior Malo – who converted all three tries – would seem central to Wai Col’s season, and in Lepa Lam they have a tough-scrummaging, ball-carrying prop of real promise. Sei’s willingness to take the ball to the line belied his youth and slight stature, though Tawa’s star turn is openside and captain Angus Duncan who may just be the best exponent at the breakdown at college level in the region.

Tawa hosts Hutt International in one of four Premiership qualifiers this coming Saturday, while Wairarapa come back over the hill for the same against St Bernard’s.

Beard Trophy kicks off on Wednesday

The college rugby continues tomorrow evening at 5.30pm at Jerry Collins Stadium when holders Porirua College put the Beard Trophy on the line against Mana College in the first match of the 2021 challenge trophy series involving these two schools and Aotea, Bishop Viard and Tawa Colleges.

The Beard Trophy was donated in 1968 by the family that bears its name for an annual match between Tawa and Mana Colleges.

In subsequent years, Porirua College, Bishop Viard College and then Aotea College all joined up and it became an annual ‘Ranfurly Shield’ style trophy for competition amongst these five schools that make up Tawa and the Porirua basin.

Whoever wins tomorrow night will face their first challenge in a fortnight, with a subsequent challenges to come every second Wednesday.

Stored inside the Beard Trophy is a book with records of every single game. One of the most important jobs of the defending or winning team after Beard Trophy games is to update the ledger with a short match report, the scorers and the teamlists, before replacing the booklet back inside the boxed shape trophy for the next match.