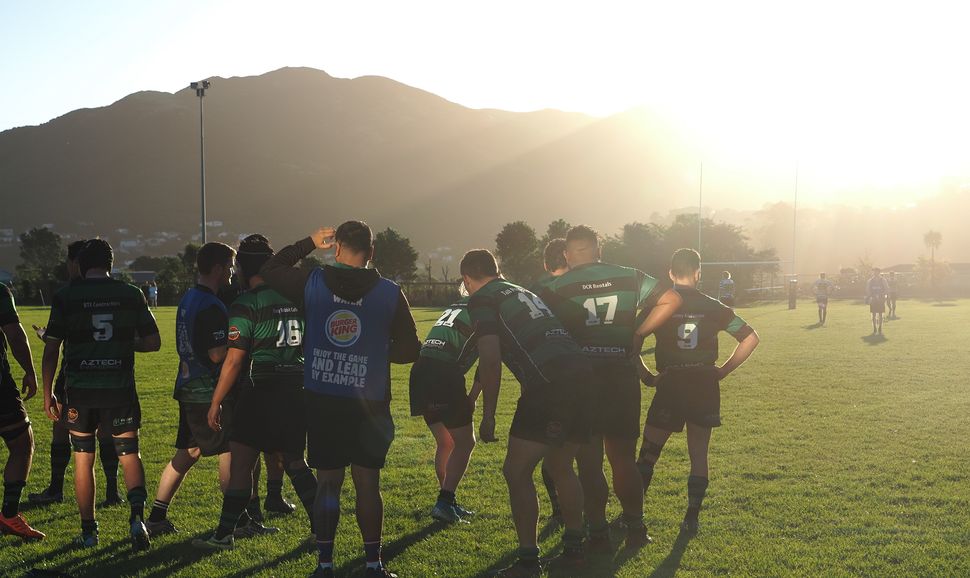 The sun sets on Mt Kilmister at the conclusion of the Old Boys University-Wainuiomata match on Saturday. PHOTO: Stewart Baird.

Heavy overnight and morning rain gave way for a bright sunny and rather warm afternoon for club rugby on Saturday. There were good crowds at several venues and much interest.  As the photo above shows, the setting sun was a problem at some venues, but better than the cold and lashings of rain.

After six weeks of Wellington club rugby in 2021, there are eight unbeaten teams across all grades, these being:

Rugby this coming week starts today, with Tawa College hosting Wairarapa College at 1.15pm. This is part of a larger sports exchange.

Then on Tuesday at Hutt International Boys’ School, the HIBS First XV takes on Rathkeale College First XV in their annual traditional match. The game is at HIBS with a 12.30pm kick-off.

Moving ahead to Saturday, Premier Swindale Shield games at a glance are:

More details later in the week in our Friday preview.

A solid contingent of player milestones and accolades from Saturday’s round of rugby, particularly on the Women’s side with four players earning their club blazers. Congratulations to Ories’ Petra Ikenasio, MSP’s Emelemoa Makisi, Norths’ Ofa Tuangalu, and Petone’s Riauviana Taulelo; while on the Men’s side MSP’s James Proctor, Norths’ Jayden McCarthy, and Avalon’s Daley Ena were able to celebrate theirs with wins for their respective sides.

Hutt Old Boys Marist have only won the McBain Shield 20 times, but 15 of those victories have been achieved since 1996.

Richard ‘Squid’ Evans scored the first try of the McBain Shield with his first touch of the ball in the fabled game. His mother is a primary school headmaster as was Alexander McBain himself.

Petone captain Jacob Gooch built the new bottom of the McBain Shield itself. It might fit a dozen more engravings.

In the fast scoring stakes, Tawa scored their first try of their Swindale Shield match against the Wellington Axemen after 30 seconds. At that stage visiting supporters were thinking of a big score. But the game evened out and they scored twice more in the next 39 and a half minutes to lead 21-0 at the break and then once in the second half to win 26-12.

The Axemen’s pack also featured the Coburn brothers, James and Tony, who have come across from Tawa to Wellington this season.

A hat tip from us to the Upper Hutt Rams, who have found a way to bridge the junior and senior parts of the club with their junior teams carrying the name of a senior club player who is, in turn, helping that team out.

The second five-eighth wearing the hooker’s jersey, the halfback wearing the second five-eighth’s jersey, the bench players starting the match? No, its another Saturday for the Avalon Wolves Premiers whose players don’t wear the jerseys corresponding to their positions owing to sizing issues. Or perhaps they are trying to confuse the Wellington Orcas scout on the sideline?

Club Rugby wishes Ories player Harmony Kinloch all the best for a speedy recovery following her injury on Saturday in the Rebecca Liua’ana Trophy first round women’s title decider. She spent Saturday in hospital as checks were done on her spinal cord.

The match started later owing to the referee being late to the ground and was then moved to the No. 2 ground at the Polo Ground following this injury. Ories won 33-31, to win the first round title and also defend the Challenge Trophy.

Secondary school students currently can’t play senior women’s rugby, as dictated by the NZRU. Should that be reviewed? It’s happened in the past and on a case by case basis could strengthen the senior competition and provide younger girls the opportunity to play rugby which is limited at school level.

Ngani Laumape to France. Good luck to the blockbusting Hurricanes midfielder. The Hurricanes have been going on a spending spree lately.

Laumape sat out Friday’s scoring spree against the Waratahs, but has four more games in which to be selected and add to his impressive Hurricanes try-scoring feats. Laumape is sitting on 47 tries for the Hurricanes, behind Christian Cullen and TJ Perenara with 56, Julian Savea with 55 and Ma’a Nonu with 48 and equal with Tana Umaga with 47.

So, not only has Laumape got the chance in the next few matches against Australian sides to reach the milestone of 50 tries for the Hurricanes, but the returning TJ Perenara and Julian Savea can add to their tallies. Perenara needs one more try to become the Hurricanes’ outright leading try scorer. Good achievement for a halfback!

What about bringing Thomas Umaga-Jensen home, to partner his brother in the midfield?

The draw isn’t out yet, but this year’s Men’s NPC season starts in the first weekend of August, so a week after the Wellington club rugby finals (which means forget having leading players playing in the business end of the Jubilee Cup, but that’s another story).

A venue that piqued Club Rugby‘s interest that will host a match in that first weekend is Pukekura Park in New Plymouth. The Taranaki RFU has sold over 2,000 tickets to the over 4,000 capacity venue for Taranaki’s first match against an as yet unnamed opponent. Pukekura Park would be a terrific venue to watch rugby from, being right on top of the action on the terraces on three sides. This proves that having a venue that people want to go to is the way to go. Wellington Stadium just doesn’t fit that bill. The Lions played one match at Porirua Park last year, which was good in theory but the occasion fell flat a bit owing to the weather that afternoon, a dreary grey old day and very windy. Plus the corporate and sponsor’s retinue moved court from the stadium to tents dominating one end of Porirua Park, which also defeats the purpose as this competition nowadays and these games at smaller venues should be about the community and more an extension of club rugby than of Super Rugby.

A Billy Wallace Best & Fairest competition update after six rounds please? A shame this competition is so secretive now.

“A Wellington rugby player who kicked an opponent in the head has been sidelined for the rest of the season after the local union successfully appealed against the penalty he’d previously received.

The Stokes Valley lock, involved in the first incident, faced a judicial hearing in relation to an incident where he kicked a Johnsonville player repeatedly, including “one big boot to the head”, during a men’s premier 2 game on Saturday.

He faced an independent judicial hearing on Wednesday night, led by a top lawyer, which concluded he should be suspended from the competition for five weeks. But the Wellington Rugby Football Union (WRFU) appealed the decision.

Let’s not sugarcoat things, the past week in rugby would be one of the most divisive and disappointing in recent history and the public posturing suggests a respite isn’t imminent. A lot of professional teams have senior leadership groups, perhaps players within clubs who have that status need to convene? The involvement of lawyers would be better suited to reviewing a  judicial system that only suspends a player for five weeks for kicking an opponent in the head.

How about this for a headline:

New Zealand Rugby boss Mark Robinson has hit back at the Players’ Association’s “attempt to destroy the Silver Lake deal”, saying the governing body was not aware of the counteroffer tabled by Kiwi investment manager Forsyth Barr.

An alternative offer to Silver Lake, valuing NZ Rugby at a $3.8 billion ($A3.53bn), has been tabled by Forsyth Barr, a proposal conducted at the request of the New Zealand Rugby Players’ Association which is not supportive of selling a stake in the national game to the US fund manager.

NZRU should look to the future and tokenise the All Blacks.

If the players association takes the money from Silver Lake will it mean Daniel Carter won’t have to appear in another Chemist Warehouse commercial?

Adding to the changes to the Incorporated Societies Act and the ‘sinking lid’ policy for pokies, the attack on sport’s funding continues unabated:

The days of the sport sector’s reliance on the alcohol industry for funding may soon be cut short, with Auckland Central MP @_chloeswarbrick proposing to ban alcohol advertising and sponsorship from sport in a new bill. #NZQandA #nzpol pic.twitter.com/lWCvEzLwnQ

More photos galleries posted after the weekend. Visit and bookmark this page at: https://clubrugby.smugmug.com/2021

Has the traditional team-building rugby outing survived the pandemic?