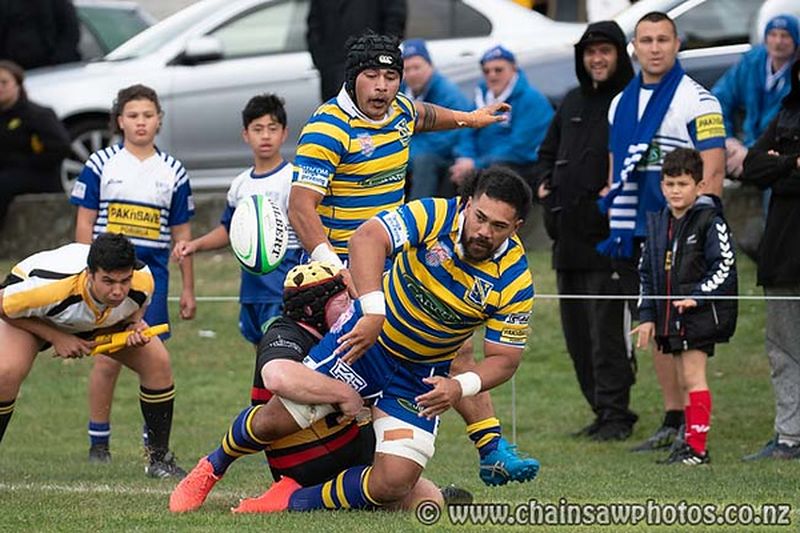 With the halfway point of the Swindale Shield looming on the horizon, it is starting to become critical for some sides and their ambitions of contesting the Jubilee Cup playoffs at season’s end. But for those at the top, they cannot rest on what they’ve done so far as a slump in form could just as easily have them on the outside looking in.

Elsewhere, the first pieces of silverware will be handed out in both Women’s divisions and potentially both sections of the Premier 2 grade, and given the fractious incidents of last week, it would be beneficial to all that the focus this week is on the gameplay itself rather than matters outside of that.

With considerable deference to the competition leaders, there’s one game that stands out above the others this weekend with the storied McBain Shield clash between Hutt Old Boys Marist and holders Petone at the Hutt Rec. Both sides come in on the back of wins in testing matches a week ago; the Villagers were made to work by a stubborn Johnsonville side while the Eagles just squeezed past Wainuiomata. Add their respective places in the standings – Petone are fourth with four wins and HOBM eighth with three – and the sense of occasion only goes up.

As you’d expect, HOBM have gone big upfront with the Manaia brothers joining James O’Reilly, plus Ben Power and Mika Alaifatu in the loose, while there’s oodles of experience across their unchanged backline where Lions halfback Connor Collins is the relative rookie of the group.

Petone are finally able to name Riley Higgins in their side for one of the more eagerly anticipated Premier debuts in recent times, having recovered from a head-knock suffered at the Super Rugby U20s and in the same week that he and teammate Peter Lakai – who is on the bench – were named in the national U20 squad. Mateaki Kafatolu, no stranger to the McBain setting, returns to the starting side after bringing up game #150 last week from the pine.

Contested almost every year since 1934, it was presented by Hec McBain in memory of his father Alexander, who was, amongst many things, the first Life Member of the original Hutt FC and served as vice-president of the WRFU.

Leaders Old Boys-University certainly aren’t idle this weekend either, with a return to their Nairnville Park paddock for the visit of Wainuiomata. The two had contrasting fortunes late in their matches last round, and if there’s been one team in recent years that’s provided a banana skin for the Goats it’s been the men from beyond the Hill Road. OBU will be defending both the Bill Brien Challenge Trophy and their interclub Peter Dunford Cup – Dunford was a Wellington College old boy who moved to the valley in the early 50’s and had a prominent role in the early days of the Wainuiomata club.

OBU have a couple of high-profile additions to their herd for tomorrow in the form of Taine Plumtree and Wes Goosen with Jonathan Fuimaono appearing to be over what forced him off last Saturday.

As of publishing we didnt yet have Wainuiomata’s team.

Despite last week’s loss, Marist St Pat’s remained in the top-three and will be looking to get back to winning ways as they return to Evans Bay. They’ll be challenged though, as Johnsonville continue to show vastly improved mettle and the points aren’t the foregone conclusion that they would have been in seasons past. James Proctor, Ken Kapeli, and Vince Sakaria are amongst those who come into MSP’s starting side with veteran duo Andrew Wells and Isaia Petelo heading to the bench and newly-minted Hurricanes signing Aidan Morgan again listed at fullback.

The Hawks have rejigged their side with skipper Andy Ellis back into midfield and Niall Delahunt switching to fullback with former OBU player Olly Paotonu given the reins at first-five.

That other top-three side isn’t far away either as the Upper Hutt Rams make the journey into the city for the first time this year, headed to Polo to take on Oriental Rongotai in the only all top-six match of the round. The home side will be looking to build on their big win over Avalon, and it’s little surprise that they’ve rung the changes given the standing of their opposition. It’s a relatively youthful side they’ve named, so they’ll lean heavily on the trio of Tuakana Metuarau, Whetu Henry, and Tuga Mativa for experience.

The Rams are largely settled, with the Svenson brothers all in the backs and some experience in the forwards coming off the bench.

They’ll play for their Bob Lendrum Cup honouring the longtime Ories player, captain, and coach who later settled in Upper Hutt after a successful stint with Fiji. It will be especially poignant this year following Lendrum’s passing six weeks ago. Ories won this 21-17 last year.

Over at Kilbirnie Park, Poneke find themselves languishing all the way down in 11th and desperately needing results to go their way, but their tough early schedule continues with Norths their opposition tomorrow on their Old Timers’ Day.

Poneke are able to welcome back Greg Foe after he missed the loss at Tawa, but this week have to do without flying fullback Nick Robertson so Caleb Robson’s utility value gets called upon once again. Norths sit in the midtable pack and would much prefer to push forward than fall back but will be well aware of the challenge Poneke presents.

Leni Apisai makes his first start for Norths this year in a largely unchanged side, though one enforced one sees veteran TK Bishop miss out owing to a suspension levied after last week’s game.

The pair play for the Cyril Collett Memorial Shield. Collett played for Porirua in the 1950’s, with his sons Paul and Bruce later turning out for Porirua and Poneke. Norths hold this after winning 55-29 last year.

Completing a busy day in the eastern suburbs with all four clubs on that side of the tunnel at home, Wellington play host to Tawa at Hataitai Park. After a couple of early blips, Tawa have rounded into form and seem set on chasing down the leaders, and look out for their front row of PJ Scheck, Lotu Nuku and Sitiveni Paongo to get stuck in and lay the foundation for them.

The home side get a boost in their fortunes with Vaea Fifita again fronting for them, and he’s one of many changes that include a return for Ranui Burchett and Irish flyer Dean McMahon, and Issac Bracewell again switching back to halfback. Their interclub trophy is the Murray & Alan Mexted Cup with the family name synonymous with both clubs.

The final game of the round is out at Fraser Park, where Avalon and Paremata-Plimmerton go in search of their first win of the year. Both suffered similar considerable defeats last Saturday and with confidence likely at a low ebb, simply finding some of that could be enough to get a morale-boosting triumph. Pare-Plim will finalise their side tomorrow morning, while the Wolves can call upon an experienced line-up to try and find their spark and get their season rolling at home.

The first round of both Womens divisions come to a conclusion on Saturday, and with it the first titles for the year. Oriental Rongotai almost have the Division 1 Rebecca Liua’ana Trophy locked away once again, as the task for Norths on their trip to the Polo Ground is almost insurmountable. To claim the trophy, Norths would need to win by 75 points to overturn the current points difference and deny Ories getting a single bonus point, whereas the latter is all the Magpies need. Elsewhere Marist St Pat’s and Petone meet a short distance away at Evans Bay.

Its winner takes the spoils in Division 2, as Hutt Old Boys Marist hosts Paremata-Plimmerton on the Hutt Rec in a straight shootout for that title with both sides having amassed the maximum 20 points so far

Behind them Poneke and Avalon will fight over third when they meet at Kilbirnie, and Wainuiomata and Old Boys-University have decided their match on Friday with OBU having defaulted.

Both divisions head into their penultimate round of matches in the first-round competitions with the possibility that each could be decided tomorrow.

In the Division 1 Harper Lock Shield, leaders Tawa (24) head to Evans Bay to face Marist St Pat’s (12) where they’ll be favourites, but also keeping an eye out for information from Nairnville where their closest pursuers Ories (20) are taking on OBU (12). Norths (15) are mathematically alive but need results both weeks to fall their away including tomorrow at Kilbirnie against Poneke (14), while bottom-pair HOBM (10) and Petone Blue (3) provide the early entertainment at the Hutt Rec.

Division 2 results last weekend saw the Upper Hutt Rams (25) put a firm grip on the first-round crown, but face their hardest test to date when they visit a Stokes Valley (20) side that will be stung by last week’s loss and must win to send it to the final round of matches. Johnsonville (15) travel to take on Wellington (11) at Hataitai, Wainuiomata (10) head to Ngati Toa to face Pare-Plim (9), and Petone White (6) clash with Avalon (9) at Fraser Park.

After last week’s scare against HOBM, OBU Green will be looking for an easier time of things but one thing we have learnt is that there’s no easy games in the Division 1 Paris Memorial. The Goats head out to the Petone Rec to face their Village counterparts who will probably feel they should have won last Saturday themselves. Tawa will want to repeat their effort when they host the unlucky HOBM at Lyndhurst, and there is an eastern suburbs derby between MSP and Ories on Kilbirnie Park.

The Division 2 JRD Cup standings were shaken up last round. Both the Upper Hutt Rams and OBU Black suffered surprise losses and they will look to get back on track when they meet out at Maidstone. Avalon will look to capitalise when they take on Wainuiomata at Fraser Park, and Poneke and Pare-Plim will look to back up their wins last Saturday and climb up the table in their match at Kilbirnie Park.

There is plenty on for fans of the school game tomorrow.

Last year’s top four can be found out at Porirua Park where they take on the four Hurricanes-region Super 8 schools. First up at 11.30am Silverstream face Hastings Boys on #1, while up on #2 Scots take on Gisborne Boys. They are followed at 1pm on #1 by Town up against Palmerston North Boys, and Rongotai face Napier Boys on #2.

In the local qualifying, two teams will join those four in the Premiership tomorrow with Wellington College hosting Aotea and Mana doing likewise with Upper Hutt College with the winners going straight through. The two losers of those matches get a second chance next week, where they’ll be joined by the winners of four games tomorrow (home teams first); Hutt International host Naenae, Porirua face Kapiti, Taita take on St Bernard’s, and Tawa meet Hutt Valley HS. The other two teams have already been determined with Paraparaumu beating Bishop Viard 22-17 yesterday afternoon and Wainuiomata opting not to travel to face Wairarapa College.