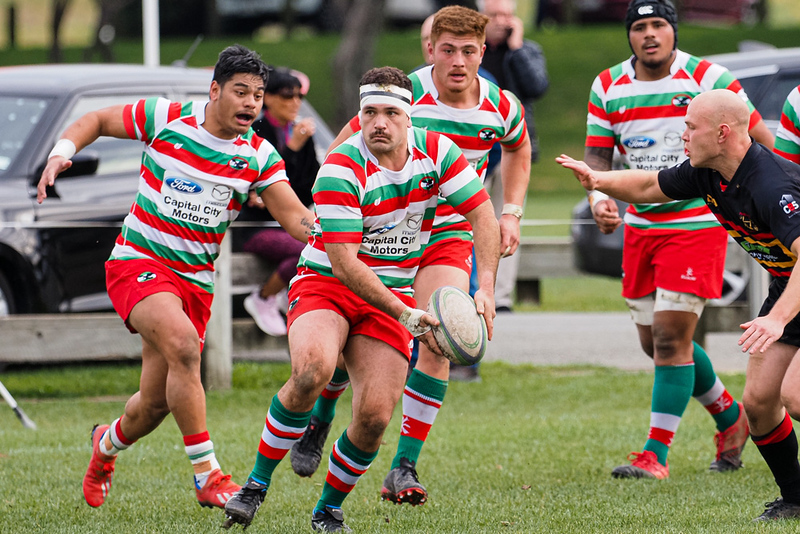 Despite having missed playing in a couple through injury, Ben Power has known since his formative years what the McBain Shield means to his Hutt Old Boys Marist and the Petone clubs.

“My dad played over 200 games for the club [Hutt Old Boys, since 1993 Hutt Old Boys Marist] and he played in a lot of McBains. So ever since I stepped out of my pram I have been down on the sideline at the big matches,” said Power ahead of this Saturday’s 86th McBain Shield fixture at the Hutt Recreation Ground.

“I grew up with dad talking about McBain and that it’s the biggest game of the year, and that Petone is the big rivalry. They are good guys and friends off the field, but as soon as you are on the field I have always been taught that they are the one team to try and beat.”

Loose forward and New Zealand Colt Doug Power was the captain of Hutt Old Boys’ 1991 Jubilee Cup winning team as part of a club career that went through to the early 2000s.

This Saturday, son Ben will be playing in his fifth McBain Shield match and is eager to add to his one win in 2018 when HOBM won 30-27.

“That was my favourite one I have been involved in, because we won right on fulltime with a try in the corner, to Anthony Utanga.”

Below: Doug Power lifts the Jubilee Cup aloft in 1991, flanked by Gavin Hill, and son Ben running freely in a match last year.

Do the Eagles do anything differently this week to prepare for the McBain match on Saturday against Petone?

“We have sat down as a leadership group and we have said nothing changes. The occasion itself should be the big enough motivation for the boys.

“There is more focus because it is McBain week, but we don’t want to change any of our preparation, so we are treating it like a normal week as far as everything else goes.

“It just sharpening up a few details. We have done our review on Petone and hopefully we can turn up and execute what we have worked on.”

A fortnight ago, the Eagles’ preparation against Ories paid off with the team scoring one of the more clinical first phases tries you will see, switching play back to the blindside from an attacking lineout and left wing Fereti Soloa and hooker James O’Reilly combining up the near touchline for the try.

“That was a planned move, after doing the review on Ories and we knew they weren’t defending that area well and testament to the players involved in the move we had the confidence to do it in the match. One of the moves we had actually been training worked on game day.”

This past Saturday, they beat Wainuiomata 30-28, in a match that yielded a combined 10 penalties including seven to Wainuiomata first five-eighth Josh Robertson-Weepu.

They dropped their first two matches against leading clubs Old Boys University and Marist St Pat’s, but have also since had a couple of players return from injury, such as the front row Manaia brothers, and a handful of guys have come into the team this year.

“After winning our last two games, we are gaining some momentum so there is a good feel within the club.”

Petone have won four from five, their loss being their last match at home to Northern United a fortnight ago.

Power made his Premier debut for HOBM straight out of school in early 2016, and according to this website’s database has played 61 Premier matches for the Eagles.

He has alternated between loose forward, where he started and played most of his school rugby at Hutt International Boys’ School, and hooker.

He captained HIBS in 2015 at No. 8, around about the time that representative selectors converted him into a hooker. These days he is happy to alternate between the loose forwards and hooker, and whenever James O’Reilly plays, which he is at the moment, the latter starts at hooker.

He made the New Zealand Secondary Schools team in 2015 as a hooker but dislocated his shoulder in their first match against the NZ Barbarians side and missed that team’s tour to Australia.

Athletics was his second love back then, and he was good enough to win medals in Wellington regional and national level in shot put, hammer and discus. He won gold in shot put in the National Age Grade Championships and in his last year at school won shot put silver at the NZSS Track and Field Championships. He was College Sport Wellington’s All-Rounder of the Year in 2015.

He spent a representative season in 2018 in Hawke’s Bay playing for the Magpies, playing seven NPC matches including two starts at hooker and five appearances off the bench. He scored two tries in a Magpies win over Northland.

Starting 2019, he played pre-season with the Hurricanes but then injured his foot then, before injuring his MCL knee early in the season whilst he was with HOBM.

But last year and this he has been mostly injury free and giving it his all for the Eagles most weekends during the season.

Outside of rugby, Power runs an exterior building washing company, doing all the window, gutter, roof and exterior cleaning of council and private buildings and houses around Lower Hutt. He started this up himself, and now employs a couple of people.

“The business has multiplied over the past couple of years. I am stoked, it has given me a career outside of rugby. If I had not of got injured when I did early in 2019 then who knows where my rugby career might be at now?

“But I love playing footy now.  I am enjoying it. And I can also earn a living.”

Remember, if the lights go dim in Jackson Street on Saturday evening, then its just Power and his Eagles teammates having lit up the Hutt Rec and won back the McBain.

The McBain Shield between HOBM and Petone kicks off at 2.45pm this Saturday at the Hutt Rec.