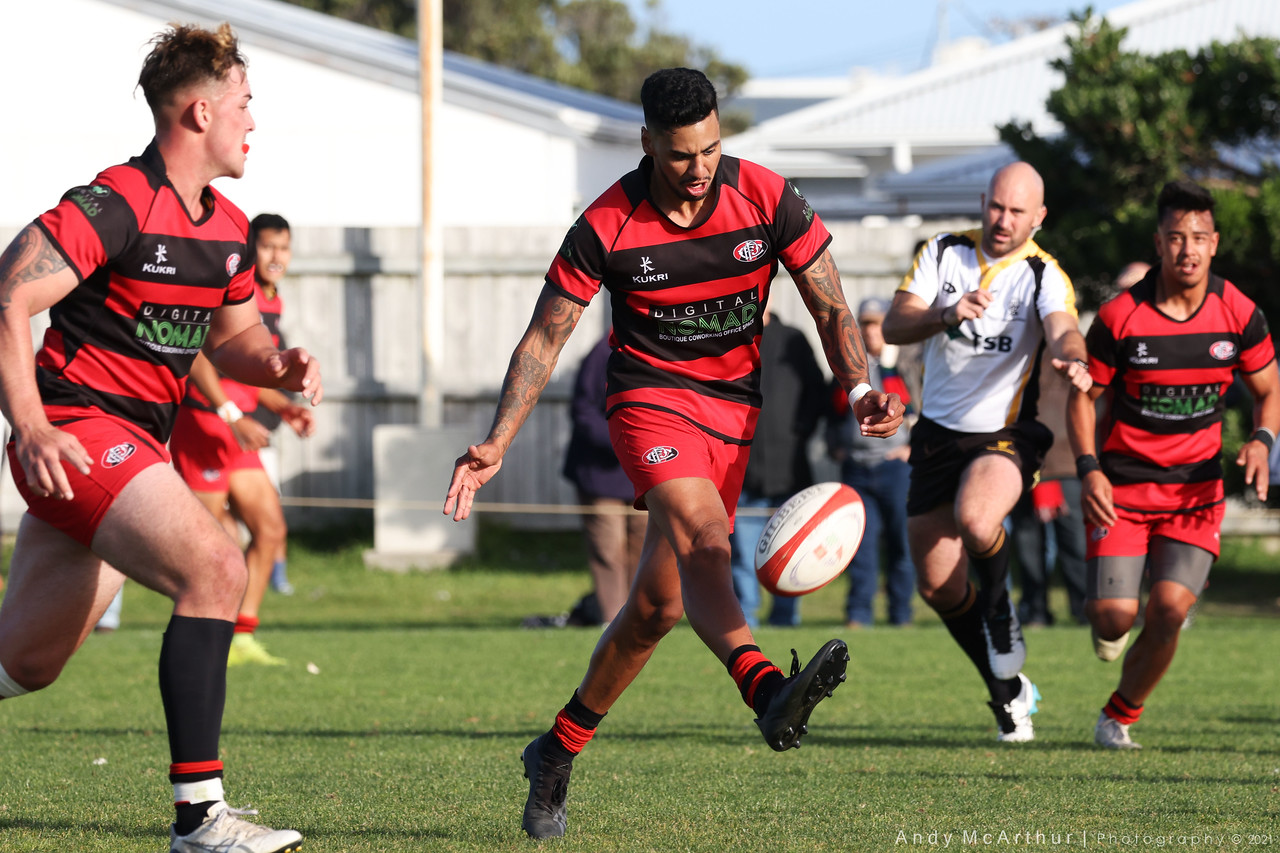 Four weeks down and the Premier table is starting to shake itself out into the contenders and pretenders, and tomorrow shapes as another pivotal round towards sorting that out. It’s also the first full day of rugby across the province with both Junior and College rugby getting underway.

It is also a milestone day for three stalwarts of the club game who all reach the 150-game mark. Teru Time will join the list of players who have achieved that for Wainuiomata when he runs out against HOBM, as will Mateaki Kafatolu for Petone when he comes off the bench against Johnsonville. But before them Hiria McRae becomes the first OBU Women’s player to reach that number and only the second in the club’s history after Jonathan Fuimaono. Our warmest congratulations to all three.

For most, the game that the eyes are drawn to is the top-of-the-table clash between the last two unbeaten sides as leaders Marist St Pats venture through the Mount Victoria tunnel to face second-placed Old Boys-University at Wellington College for the Goats’ Old Timers Day. While four weeks is a relatively small sample, no team so far has scored more points (or tries) than the defending Swindale holders while none has conceded fewer than the Jubilee Cup champs. Add to that last year’s results – MSP won the Swindale encounter but OBU took the spoils when they met in the Jubilee Cup semi-finals, and the elements are there for a cracking encounter.

Both sides are at near full strength. Wirangi Parata, Te Wehi Wright, and Ty Poe come back into a very settled OBU side, but both Callum Harkin and Regan Verney miss out with injury. MSP bring back Ryan Dafel, Willie Schutz, and have the services of Jonathan Taumateine, and add some veteran nous to the bench with Vince Sakaria and James Proctor.

Its no surprise that this battle of two of the heavyweights is the feature game on Te Upoko this week, so tune in to the E Tu Whanau Footy Show from 2:15pm tomorrow, 1161AM, 87.6FM & iHeart Radio.

Sitting third despite last week’s loss, the Upper Hutt Rams will be keen to return to winning ways and will be favourites to do that against a struggling Wellington side who make the journey out to Maidstone. The Rams will be keen to make hay while they can, as the rest of their schedule is full of teams that finished ahead of them last year. A notable positional switch for the Rams line-up tomorrow is the swapping of Tyan Barrett and Tajun Crossland-Misa from the first first five-eighth and fullback positions.

Wellington’s season has had a rough start, being manhandled in three of their four matches so far and simply being competitive might be viewed as a positive step. But this week they have a few interesting additions with long-serving Tawa brothers James and Tony Coburn in the propping roles and Manu Maihi, impressive for Ories a couple of years ago, also having shown up at Hataitai Park. Well-traveled veteran midfielder Ahtun Masun is another named in their starting XV.

The game at Wellington College isn’t the only one involving sides both in the upper reaches of the table, as just a short distance away up State Highway 1 Johnsonville plays host to Petone at Helston Park. Sixth is heady heights for the Hawks who, along with Upper Hutt, have been amongst the most-improved sides in the early going and could just as easily be unbeaten at this point. Petone suffered their first loss last week against North and will want a return to winning ways, and make just a handful of changes with Ryan Imrie and Neyla Masima restored and a first Premier start for Richard Evans at the back.

For Johnsonville, Andy Ellis returns to fullback, with Paula Kinikinilau coming off the bench to partner Aukuso Tuitama in the midfield, while Tawera Rameka-Styles comes on to the left wing and Olly Paotonu comes across from OBU and lines up on the bench.Along with Johnsonville, a big winner in the standings after last weeks round was Tawa, who vaulted up to fifth and will be looking to continue their winning streak on their Old Timers Day. Poneke are the visitors to Lyndhurst, and having lost their last three that optimism that existed at season start must be in danger of evaporating even though their schedule has been brutal in the early going.

The home side bring Hemi Fermanis and Tito Ioane back into their forward pack, Kemara Hauiti-Parapara and James So’oialo both move in one place in the backs, and such is their embarrassment of riches that Hurricanes pair Orbyn Leger and Pepesana Patafilo are only on their bench. Poneke are able to welcome back both Galu Taufale and Jimmy Hewitt, but are without Greg Foe for this encounter.

After losing their unbeaten record a week ago in a visit to the Hutt Valley Oriental Rongotai head there again; only this time its slightly further to Fraser Park to face Avalon. The Magpies have rolled the changes to take on the winless Wolves, but will also need to be wary that the home team can be quite a different animal on their home turf. Tuga Mativa, Victor Groom, and Ronaldo Seumanufagai are amongst those that start tomorrow, with Saia Paese given an opportunity at first-five.

For Avalon, Jordan Sului moves from hooker to No. 8 to cover for Sefo Aumua, and Lyon Pretorius comes off the bench into hooker. Residing in the bottom-half of the table isn’t quite what both Wainuiomata and Hutt Old Boys Marist had in mind ahead of their clash at William Jones for Wainuiomata’s Old Timers Day. Each did however improve their fortunes by beating sides ahead of them last week, so with that and the occasion, this should be one of the quality contests of the round. Time captains Wainuiomata in his milestone match with regular skipper Greg Leolofi nursing an injury with versatile veteran Marvin Karawana taking the latter’s place in the side, which also includes Hurricanes outside back Lolagi Visinia in the #15 jersey.

The Eagles have named an unchanged backline from that which beat Ories last week, while there a couple of tweaks to their pack. Rei Manaia returns to the team, to partner his brother Brett and James O’Reilly in the front row, while David Filipo comes returns to the engine room, allowing Jordan Gillies to move from lock back to the loose forwards. Matt Sleith joins Gillies in the loose trio, with Willie Rua coming off the bench.

And finally, you can read the same for Norths as for the two sides above. Tomorrow they take their home game – against Paremata-Plimmerton in the Porirua city derby – across the other side of the harbour to Onepoto Park as they honour the Titahi Bay side of their heritage, and seem likely to add five points to their tally against the side at the bottom of the ladder. They’re largely unchanged, retaining Hurricane Pouri Rakete-Stones and Blue Leni Apisai for another week. Khya Wilson moves into halfback for Pare-Plim to replace Dylan Leney after the latter’s horror leg break las week and where he’ll partner older brother Justin in the halves, with the old firm of Teariki Kie Tonga and Danny Herewini propping their scrum.

As usual, there are a number of interclub trophies in play tomorrow:

All roads lead to Petone for the provinces Women’s sides as they meet for their now-annual Gala Day with all five matches taking place on or near the Rec.

Oriental-Rongotai can all-but wrap up the Rebecca Liua’ana Trophy when they take on winless Petone on the #1 ground, while Norths will be hoping to still have an outside chance when the two meet next week, but tomorrow must deal firstly with Marist St Pats on #2.

There’s still plenty to be decided in Division 2 however. Both Paremata-Plimmerton and Hutt Old Boys Marist come in with perfect records so far and will be looking to keep it that way ahead of a likely decider next week. HOBM are on #3 against bottom-side Old Boys-University, while Pare-Plim have a trickier assignment on #4 against third-placed Avalon. The final match of the day is across Udy Street on North Park where a Poneke side looking to build on last week’s breakthrough win takes on Wainuiomata.

The highlight game of the round in the Division 1 Harper Lock Shield is the early contest at Lyndhurst Park where leaders Tawa face one of their closest pursuers in Poneke. Norths and Ories will both be hoping for a Poneke win to close the gap but would at the very least be aiming to keep pace against winless opposition; HOBM are the visitors to Onepoto while Petone Blue get a bonus home game with the change of venue for Ories. The fourth match is a mid-table tilt between OBU and MSP on neutral ground at Kilbirnie Park.

In Division 2 the Upper Hutt Rams and Stokes Valley will remain the top two sides irrespective of what happens tomorrow, but neither will fancy a loss at this stage. Both face teams in the mid-table with the Rams at home against Pare-Plim, and the Rhinos hit the road again for Helston Park and a meeting with Johnsonville. Elsewhere Wellington heads into the valley to face winless Avalon at Fraser Park, and Petone White venture over the hill to take on Wainuiomata at William Jones.

Two weeks in and there’s a familiar look to the Division 1 Paris Memorial table with OBU Green already having assumed the lead and will look to retain that when they take on HOBM at Kelburn Park. MSP are the other side with two wins and head to Redwood to face Tawa, while Petone and Ories meet at the Rec.

In the Division 2 JRD Cup the Upper Hutt Rams and OBU Black have each won their opening two games; the Rams head down the valley to take on Avalon in the first game on the Fraser Park turf this season while OBU host Poneke on MacAlister Park. The third match in the division is at Mary Crowther with Wainuiomata taking on Pare-Plim.

As touched on above and covered yesterday, tomorrow also marks the start of the College rugby season with preseason, grading, and qualifying games across every grade from Under 55kg through to Premier.