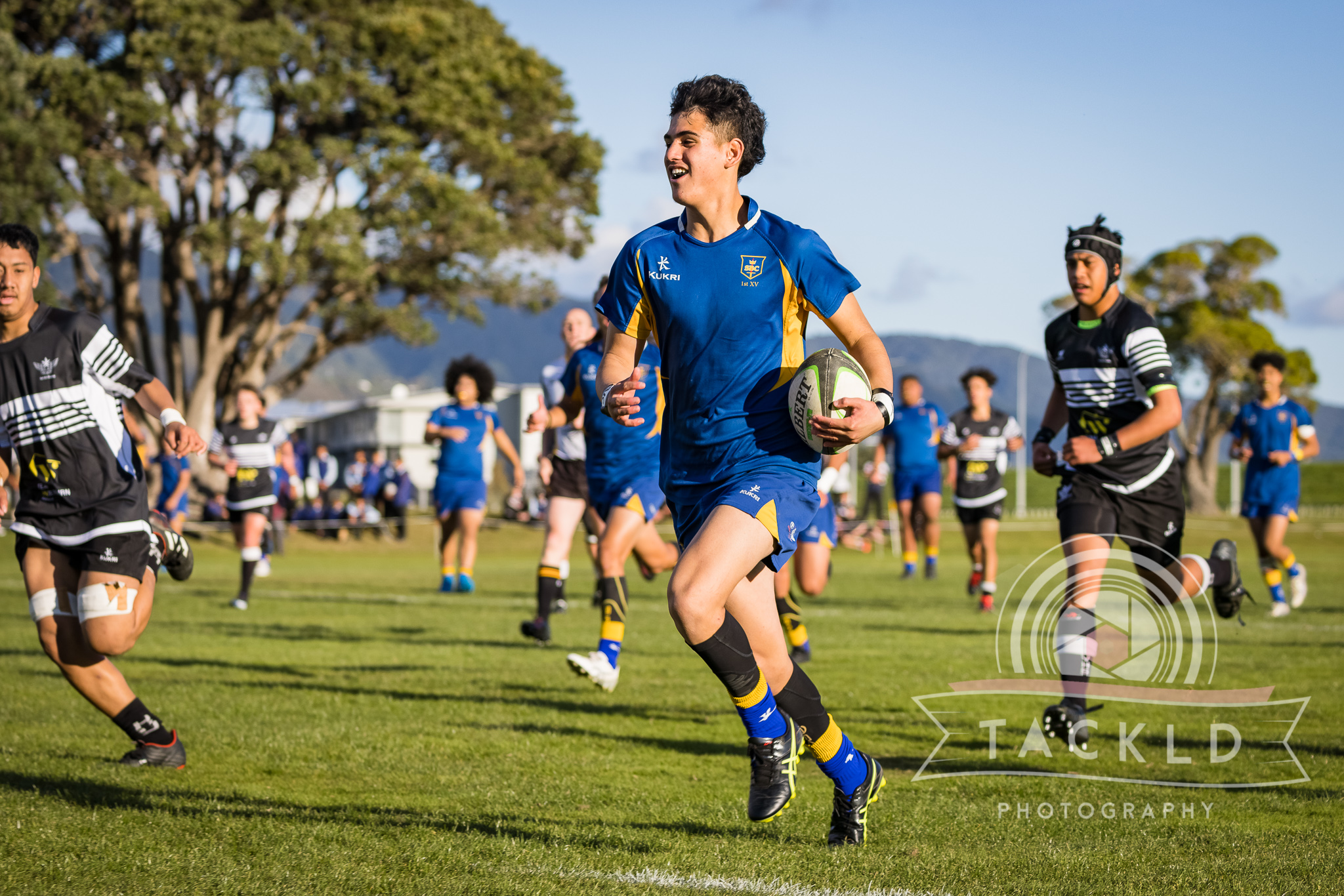 The Secondary School rugby season gets really serious at the beginning of Term Two with grading games kicking off this Saturday.

St Bernard’s were resounding winners by 86-0. The visitors led 41-0 at halftime and scored 14 tries, accompanied by eight conversions.

In the opening minute HVHS got into a tangle attempting to clear the ball from their own territory and conceded a try, a stumble from which they never recovered.

St Bernard’s used their superior size effectively and had good formation in the backs. The thrust came from second-five Kelly Tanagiwai-Scott who was damaging on the crash, scored a try, and created others with his sheer presence, and occasional touch of subtlety.

First-five Junior Leleisivao is the opposite in stature, but generally makes good choices. Year 11 rookies Regan Gray and Joshua Le’afa-Paki are promising too.

Hooker Paul Pio was a bully, not always accurate in the lineouts, but uncompromising and quick. Blindside Max Fata-Meafou scored three tries from all from-past halfway. His effort in the first-half where he rounded the fullback with a classic in-out swerve was especially eye-catching. The Year 12 appears to have plenty of innate ability.

St Bernard’s was sixth in Premier I last year, but beat fifth-placed Wellington College. HVHS was seventh in Premier III – that’s 20 places below the Catholics.

What about HVHS? Not a lot can be said after such a hiding, and matters only got worse when they lost a key player with what appeared to be a head knock early in proceedings.

However, they did finish the match just five-metres out from St Bernard’s line following their liveliest attack. Despite conceding more points in the second-half, HVHS made better use of the possession they had.

The presence of Haydn Jones was conspicuous. Since 2009 the reporter has hosted the Good Sorts’ slot at the end of Sunday’s 1 News at Six, which celebrates community heroes. HVHS manager Daniel Peckston will be featured. The 19-year-old has been manager for a few years. He might lack physical size, and often subtly, but he makes up for it with an abundance of passion, commitment and initiative. In addition to mundane match duties he’s been active in trying to improve all facets of rugby at the college. He has worked on a mostly voluntary basis with a number of youth. Ironically Daniel’s brother went to St Bernard’s.

HVHS travels to Porirua College for the first round of grading on Saturday.

Challenge Cup: St Bernard’s won the first match in 1966 by 8-3, and have historically dominated the rivalry. Competition ceased between 1977 and 1984 because both schools were playing in different grades. In 1985 the series resumed and has pretty much continued uninterrupted since. Other big wins by St Bernard’s include a 55-5 win in 2015 and a 43-5 triumph in 1994. A year earlier HVHS celebrated their biggest victory with a 33-3 win.