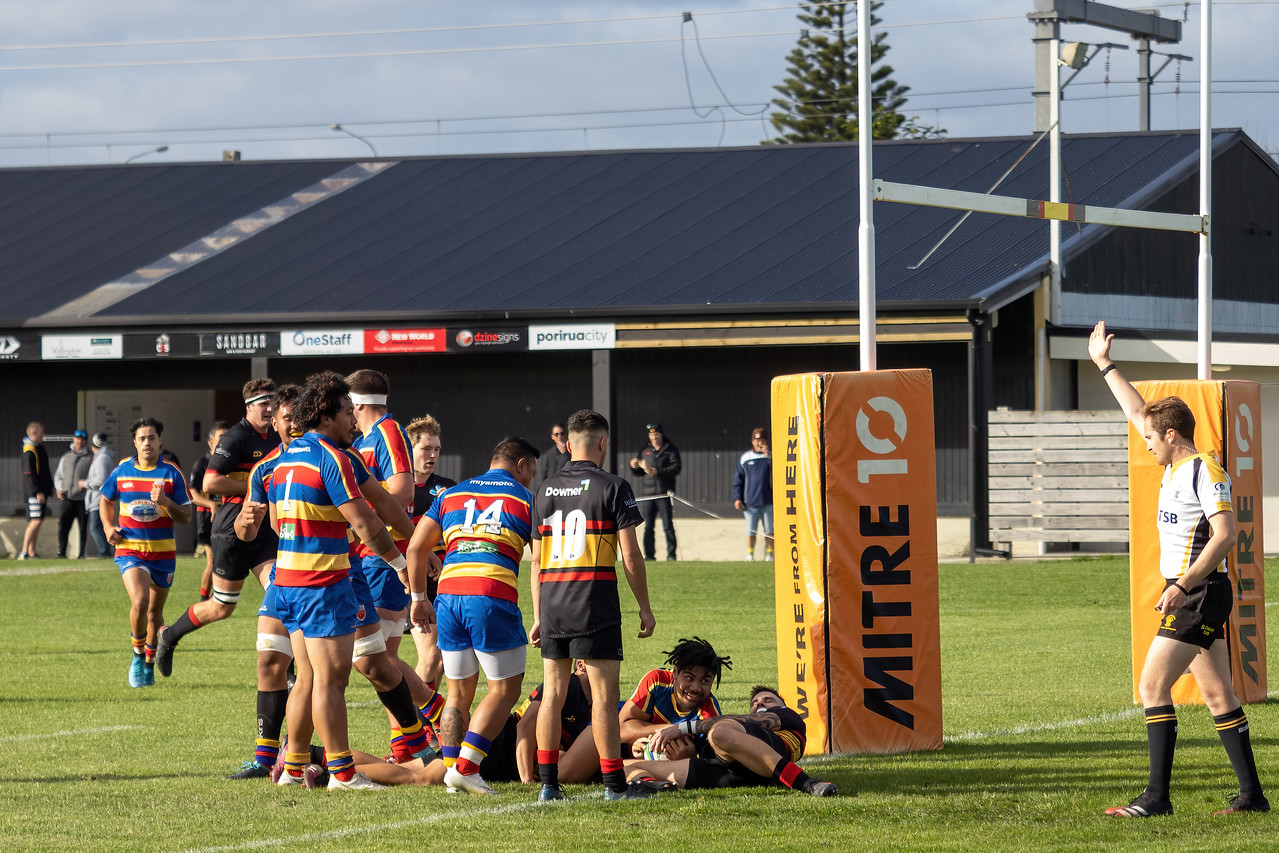 Time flies when you are having [rugby] fun. After a long lead-in, we are already a month in to the club rugby season in Wellington, while teams are preparing for the second rounds in both Hawke’s Bay and Manawatu Premier competitions.

It keeps getting better. This Saturday marks the start of the school grading season, the WRFU is holding a Women’s Gala Day with all matches at Petone, and the feature game of the Swindale Shield is the match-up between Old Boys University and Marist St Pat’s who are both unbeaten and this could prove to be the first round deciding match unless one or other teams have a say in the matter in the coming rounds.

There is one school match during the week this week and that is this afternoon. At 3.30pm the Hutt Valley High School and St Bernard’s College First XVs meet at HVHS.

Old Boys University, Tawa and Wainuiomata all have their Old Timers’ Days this coming Saturday.

Make mine a double department. Every Swindale Shield game on Saturday had a player that scored two tries in the match, headed by MSP’s James Tuiatua who notched four in their big win over Poneke.

Best wishes to Paremata-Plimmerton halfback Dylan Leney, who suffered a ghastly leg injury in the first half of their loss to Tawa on Saturday.

You have to wonder if there’s some sort of curse on Ngati Toa Domain though, as Leney’s injury is the third similar one suffered by a Pare-Plim player on their home deck in as many years.

The Poneke Women’s team had their first win since 2017 on Saturday, beating Old Boys University 39-21.

Three games, three hat-tricks for two-sport star Thamsyn Newton so far this year after returning to her junior club Paremata-Plimmerton for the 2021 season.

But even her efforts pale when matched against that of the incomparable Ayesha Leti-l’iga, below:

The number of huge scores being racked up in Women’s Premier rugby must be a cause of concern. In Auckland this weekend Manurewa beat Grammar Tech 103-0, College Rifles beat Waitemata 102-0, and Marist overpowered Albany 93-0. In Canterbury 10/12 games have been decided by 40 or more points. The figure is 6/16 in Waikato and 8/17 in Wellington.

Luke Omeri celebrated his 35th blazer game for Paremata-Plimmerton by scoring a try against Tawa.

Paremata-Plimmerton captain James Corcoran is nicknamed smoky because he’s often at the coalface of the forwards exchanges. The lock in his 85th game on Saturday against Tawa complained his side went down like a “pterodactyl” in their 71-10 defeat.

Sets of brothers aren’t uncommon in rugby but Saturday’s round saw two more sets of three start together for the first time. At the Hutt Rec Ories veteran Poasa Poasa started at prop with his younger twins Penieli and Peteli at hooker and No8 respectively, while at Ngati Toa Domain Pare-Plim coach Justin Wilson’s three eldest sons Justin, Brandyn, and Khya all started in the backline.

James So’oialo is back for Tawa following a period in Melbourne which also included some training appearances with the Melbourne Rebels. He has scored 1681 points in 142 matches for both Tawa and Norths.

Sam Reid is kicking for Old Boys University. On Saturday he nailed eight conversions as the students dealt to struggling Wellington 66-3. Prior to this year he’d only kicked a solitary conversion against Avalon in 2017. However, in 2016 he scored 250 points for the OBU Colts when they won the championship.

2019 St Pat’s First XV Silverstream playmaker Rocco Berry scored his maiden NRL try for the Warriors on Sunday in their 24-20 win over the North Queensland Cowboys.

In Manawatu, the unbeaten Fielding Yellows sealed the first round with a 27-20 win over Varsity. But not without withstanding a comeback after leading 17-0 in the first half.

College Old Boys finished the first round in second, after beating Te Kawau 44-17 in a night game, while FOBO beat Freyberg 22-12 and Kia Toa pipped Old Boys Marist 29-28 with a late penalty.

The Hurricanes were last in Super Rugby Aotearoa but actually scored more points (200) and conceded fewer points (223) than the Chiefs who will contest the final. The Chiefs points scoring record in the round-robin was scored 187 points and conceded 230. The Hurricanes also had one more clean break than the Crusaders 77-76 but suffered double the number of yellow cards (8) than the next worst team the Highlanders with four.

Despite some wayward lineout throwing and ill-discipline at times Dane Coles still proved the merit of his experience. Du’Plessis Kirifi was a slow starter but was in top form by the end of the season tying Codie Taylor for most tackles in the competition with 95. Devan Flanders appears to be a fine young prospect. Jordie Barrett scored 95 points from fullback but halfback and first-five remains a real area of concern.

The Hurricanes suffered their first losing season since 2013 when their record was 6-10. Unfortunately, 2021 is the 10th time since the inception of Super Rugby in 1996 that the Hurricanes have lost more games in a season than they have won.

The Chiefs beat the Blues 39-12 in the first ever women’s Super-Rugby match. The Chiefs lineout was a real source of strength and captain Les Elder scored from a set play from that facet of the game. The try scored by Chiefs wing Langi Veainu where she surged from halfway and outpaced the fullback is one of the best tries you’ll see this year.

Former All Blacks lock Dominic Bird is returning to New Zealand from a successful stint in France to link up with the Hurricanes for next year’s Super Rugby competition.

The 30-year-old former Canterbury, Crusaders and Chiefs representative will line up for the Wellington Lions for this year’s Bunnings Warehouse NPC before joining the Hurricanes for next year’s Super Rugby competition.

Written content is definitely a dying medium in some quarters. A visit to both the Hurricanes and the Dominion Post’s websites on Saturday morning looking for a match report/reivew of the Hurricanes win over the Highlanders the previous night. Nothing. A click over to the Otago Daily Times. They had an article but it carried no scoreboard. Fourth time lucky? The NZ Herald and it wasn’t behind a paywall

On the Dominion Post, have they finally dropped all pretence of covering other sports and is it now the Football Times? That sport got the ‘full house’ of coverage on Saturday – well done to them.

Last week New Zealand Rugby posted a loss of $34.6 million. Revenue was down $40m, or 26 per cent, at $55m, a much better result than had been expected during the Covid lockdown last year. NZR cut its funding to provincial unions by $3.76m, because of the effects of Covid. Provincial Unions stand to make $39 million from the Silver Lake deal which they voted for at the AGM on Thursday. However, the New Zealand Players Association is opposed to the deal and seven rounds of mediation has yet to resolve the impasse.

The Rugby Players Association has labelled the $387 million Silver Lake proposal a “bad deal” which it thinks could send New Zealand Rugby deep into the red in the years to come.

The provincial unions and Māori board have given their tick of approval for New Zealand Rugby to sell 12.5 percent of its commercial assets to the US equity firm.

But that approval goes nowhere without the sign off of the New Zealand Players Association.

This past week in history on April 29, 2013 saw Joe Schmidt appointed coach of Ireland. Having won 77 of 99 matches, including every major trophy, with Leinster he was a strong candidate and didn’t disappoint winning 55 of 76 matches, including three Six Nations championships and the 2018 Grand Slam. His reign ended somewhat lamely when Ireland was thrashed by the All Blacks in the 2019 World Cup quarter final, but Schmidt guided Ireland to their first ever win against the All Blacks and had a winning record against Australia, Argentina and South Africa. Schmidt was appointed World Rugby’s Director of Rugby and High Performance in October 2020, a newly created position that includes responsibility on issues related to player welfare, training and education.

A fundraising page has been set up to support the family of of Fijian rugby player Nemani Waka, who died in France earlier this week following a long battle with tongue cancer.

The 34 year-old second rower played club rugby in Wellington and for East Coast in the Heartland Championship before stints with Chambéry and Rouen Normandie in France.

Liana Mua is a close friend of Nemani’s partner Francesca Rex-Horoi and started a Givealittle page to help cover the cost of repatriating his body back to Fiji.