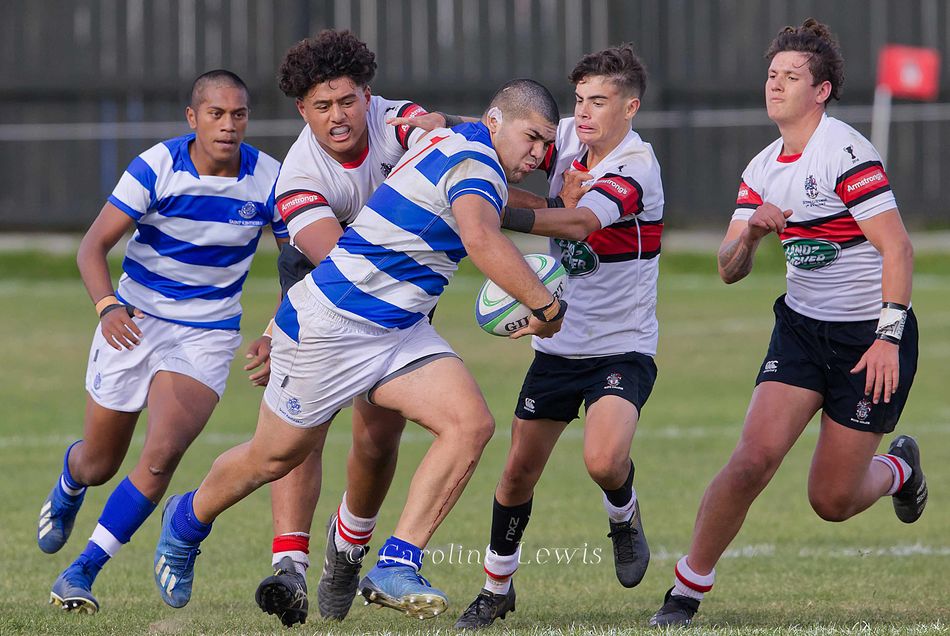 The Auckland visitors led from start to finish but were challenged by Scots on numerous occasions throughout the match.

St Kent’s opened the scoring in the first five minutes with a pushover try from a lineout, converted from the sideline by first five-eighth Jade Stewart.

Scots No. 8 Cody Lokotui responded with a try to close the gap to 7-5, but St Kent’s would score two more tries in the first half, including a try to flyhalf Stewart, to make it 17-5 at halftime.

A key period of the match was just before halftime when Scots pressed on attack inside the 22, but St Kent’s rallied with committed defence and held them out.

St Kent’s open the second half scoring with a rumble over try to lock Nick Morton to extend their lead to 22-10.

Scots rallied, scoring a try to industrious lock Maea Tema-Schmidt to make it 22-15.

But then St Kent’s year 9 wing Siale Pahulu (scoring his try below) beat the rushing cover defence to score a well taken try in the corner.

A St Kent’s tight forward was red-carded, before Scots replacement Will Lambie scored with a few minutes to play to cut the deficit to 27-22.

Shortly after the next re-start St Kent’s won a penalty from a handy position and they kicked this to make the final score 30-22.

A key facet to the St Kent’s win was their lineout drive and their ability to disrupt Scots in the same area. Loosehead prop Ezekeal Kalo was strong, Stewart also played well, as did No. 8 Saipele Tito.

For Scots, fullback Edoardo Payano made a couple of breakout runs in the second half but was largely kept quiet. Replacement forward Braeden Goli added impetus off the bench and blindside Aidan Christians toiled hard.

In the playoff for third and fourth St Andrew’s College beat Lindisfarne College 33-10.

St Andrew’s had the result in the bag by halftime, leading by the decisive margin of 26-3.

Lindisfarne started promisingly and they could have scored the game’s first try had they capitalised on an overlap. But the St Andrew’s forwards soon took charge and Lindisfarne’s wobbly lineout became an Achilles Heel for them.

Much like Wednesday, the second half was dominated by Lindisfarne’s determined spirit. Their loose forwards were busy and abrasive and Lindisfarne scored the last try of the match to close out a contest that never raised to great heights.

Time Still On Wainui’s Side