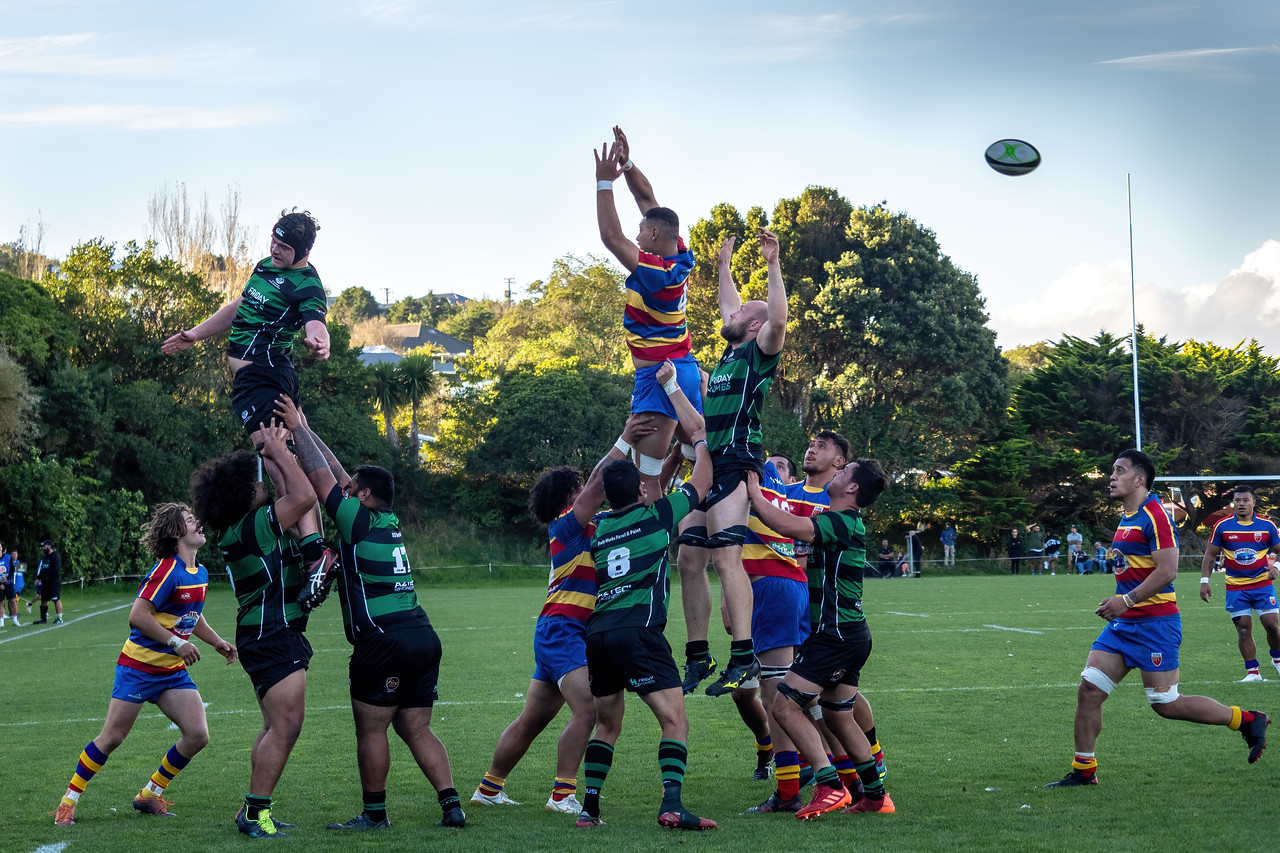 The Swindale Shield is set to reach new heights in round four, with a series of big games around the region. Tawa head up the motorway to play Paremata-Plimmerton, while Wainuiomata are back at home hosting the Upper Hutt Rams. PHOTO: Stewart Baird.

Another busy and full day of rugby around the province awaits, with key games not just at Premier level, but can be found all the way down the list of matches.

Three weeks in and the field is starting to string out already, with a five-point gap having emerged between the top-five and the rest, with Marist St Pats and the Upper Hutt Rams leading the way.

Starting with the former, Marist St Pat’s play host to one of the more eagerly anticipated matches of the season when Poneke make the walk across to Evans Bay for the Battle of Kilbirnie and their Horan-Millar Trophy. The home side have been in imperious form so far in their defence of the Swindale Shield and will be looking to keep it that way while knowing that the visitors will themselves know that they can’t afford to fall too far off the pace even at this early stage.

MSP give first starts this season to Josh Toomaga and Luke Donaldson in a mostly unchanged side. Andrew Wells and Aidan Morgan are named at #10 and #15 respectively as they were last week, so it remains to be seen if they swap ahead of kickoff. Poneke are without co-captain Galu Taufale so the captaincy shifts to Ben Huntley who returns for his first start of the year. Antonio Vaka, who has made a strong early impression, is back at lock alongside Ezekiel Fiso who earns his first Premier start.

As covered on Wednesday this year marks 100 years since MSP’s forerunner Marist Brothers reached the-then Senior 1st grade and the first match between the two at that level of the club game. MSP won this clash 50-18 last year.

At the head of the Hutt Valley, the Upper Hutt Rams have made their best start in many years though it comes with the considerable caveat that they have so far only played teams that finished below them last year. That changes tomorrow, as they head down the valley to face Wainuiomata at William Jones. For their part, it’s been a sluggish start for Wainuiomata who have been comfortably beaten in two of their outings and only just got home a fortnight ago against Wellington. The reins at #10 are handed to Josh Robertson-Weepu. The Rams bring back loosies Josh Woodward and Jack Wright with Josh Brown absent, and the solid influence of Tafa Tafa returns to their midfield.

There’s an interclub trophy in play here with the two contesting their Peter Jones/Dave Ritchie Cup which acknowledges former managers of the two sides. It’s held by Wainuiomata after their 29-19 win last year.

Back over the Hill Road is another of those looked-for matches with Petone taking on Northern United on the Petone Rec. The Villagers have so far answered the question of how they’ll gel with so many changes over the offseason in the affirmative and are starting to settle into their work which bodes well for them and less so for the rest. Tupou Sopoaga returns to the starting side for his 50th and Blazer game and Vince Aso runs out in the saddle for another week. Like Poneke, Norths are in danger of being set adrift and a loss here could have them as much as 14 points off the pace. Their stocks are bolstered with Hurricanes prop Pouri Rakete-Stones turning out for them tomorrow, and there’s a Leni Apisai sighting on their bench. Another returnee is the talismanic Parekura Lalaga who starts in his first game for the year.

The two play for their Murray Henderson Shield, currently held by Petone after their 21-10 win in last year’s final round which also secured them a Jubilee Cup playoff berth. Henderson was amongst those that facilitated the merger of Norths’ predecessor clubs Porirua and Titahi Bay, a great friend of many Villagers, and his tireless work for community rugby saw him made a Life Member of the WRFU. There is also the Collins Medal – honouring late cousins Jerry and Willie – at stake for the player of the match.

Completing the trio of matches in the Hutt tomorrow, on the north side of the river it’s Oriental Rongotai that visits the Hutt Rec to face Hutt Old Boys Marist. The Eagles face the same predicament as Norths and Poneke in that a loss would leave them too much to do in terms of Swindale aspirations and they bring back several players rested against Avalon, including Brett Manaia, James O’Reilly, Ben Power, Brandyn Laursen, and Tomasi Alosio. The Magpies are after a trophy that has eluded them for well over 100 years; the Swindale Shield was the prize when they won the championship in 1910 but they haven’t won it since it returned to play in 1969. Their side tomorrow sees Penieli Poasa return to join twin Peteli and old brother Poasa in the pack, with Steven Va’a back in the side in midfield.

The two sides play for the Bondy Memorial Cup, in honour of the late Ories patron and former player, Club Captain, Chairman, President and Life Member Don Bond who died just weeks before the Magpies 2011 Jubilee Cup triumph. It’s held by HOBM after a grinding 11-3 win on a soft Polo Ground in last year’s opening round.

Back in the city Old Boys-University head to Hataitai Park where they’ll be warm favourites against Wellington. The Goats have been effectively efficient in winning all three matches so far and could cut loose against an Axemen side that’s been well-beaten in two of their outings so far. OBU have shuffled their deck somewhat, with a first appearance for the year for Morgan Poi and a return for Caleb Delany and Tobias Wickham-Manuel and Nathan Blundell getting runs on the wings. Wellington will be far keener to replicate their efforts of two weeks ago when they nearly, and perhaps should have, beaten Wainuiomata. Issac Bracewell returns to halfback where he’s able to exert more influence than from fullback, and indeed much of the side is same faces in different jerseys from a week ago.

In play between the two is their Dean Gifford Memorial Cup. Gifford played for a number of clubs including both Wellington and OBU and the trophy was donated after his death in 2012

Out in the northern reaches of the province, Tawa makes the trip up the road to Ngati Toa Domain and a clash with Paremata-Plimmerton. The visitors might be best-placed to make up some ground this weekend against the side currently on the bottom of the pile, but although undermanned the hosts will look to make matters as difficult as possible. Luke Omeri returns for Pare-Plim and will play his blazer game off the back of the scrum and all three Wilson brothers start together for the first time, while the name that jumps out in the Tawa lineup is James So’oialo who appears in a Wellington club game for the first time since Tawa’s 2018 Jubilee Cup semi-final loss to OBU.

And finally, another side that will be looking to move up the ladder is Johnsonville, who themselves could be three-from-three with just a bit more luck. Looking for luck are Avalon who are the visitors to Helston with their Swindale winless streak now reaching 16 games, though that’s only halfway towards the mark of 33 set by the Hawks across the last four seasons. The Wolves will go in without a couple of their veterans in Akuila Alatini and Logan Blake but are otherwise largely unchanged from last week, while Johnsonville have named a mostly settled side from previous weeks, with Andy Ellis coming into second five-eighth from fullback to play outside Irish duo Mark Sutton and Niall Delahunt a notable positional change.

This week’s radio coverage comes from Ngati Toa Domain, where Adam Julian and Brad Hudson with Dion Waller will call the Pare-Plim vs Tawa match.

As usual, all seven matches are timed to start at 2.45pm.

Standing as the last unbeaten Tawa have skipped clear in the Division 1 Harper Lock Shield, and their task tomorrow to keep it that way is a trip to Nairnville to take on OBU. Behind them the chasing pack will be hoping to make ground; Ories head to the Hutt Rec and winless HOBM, Norths likewise to the Petone Rec and the Villagers, and MSP and Poneke provide the early entertainment at Evans Bay.

In Division 2 the leaders nearing the halfway point are the Upper Hutt Rams and Stokes Valley, and they both hit the road tomorrow. The Rams head over the hill to face Wainuiomata at William Jones while Stokes Valley go further, into the city to take on Wellington at Hataitai. Elsewhere, one-win sides Pare-Plim and Petone White meet at Ngati Toa, and Johnsonville host winless Avalon at Helston.

All matches are 1pm kickoffs this week.

The Division 1 Rebecca Liua’ana matches this weekend are the reverse of the fixtures from three weeks ago. Leaders Oriental-Rongotai make the short trip west to face Marist St Pats at Evans Bay, while Norths head south to take on Petone at the Petone Rec.

In Division 2 there’s a meeting of unbeaten sides with Avalon and Hutt Old Boys Marist clashing at Fraser Park with the third unbeaten, Paremata-Plimmerton, on home turf for the visit of Wainuiomata. The other match of the day has Old Boys-University hosting Poneke at Nairnville with each looking for their first win of the year.

All five matches are scheduled for the usual 11.30am start time.

Here’s hoping that we get all six scheduled matches played tomorrow after a less-than-complete start a week ago.

In the Division 1 Paris Memorial the two teams that won on the field, Marist St Pats and Petone, clash on Kilbirnie Park with the third victor – albeit by default – defending champions OBU Green getting underway against Tawa at Lyndhurst. The third match pitches HOBM against Ories on the Hutt Rec.

The Division 2 JRD Cup matches have Wainuiomata welcoming the Upper Hutt Rams to Mary Crowther, OBU Black head north to face Pare-Plim at Ngati Toa, and Avalon are back in the city, this time to take on Poneke at Kilbirnie. The other news in this grade is that Johnsonville have elected to withdraw their entry, leaving us with the 12 teams above.

All six matches are timed for 1pm kickoffs.

After seeing off one of their fellow unbeatens a week ago, Avalon get the chance to do it again when they host Eastbourne in a top-of-the-table clash at Fraser Park. Behind them the Upper Hutt Rams and Poneke will look to stay in touch when they meet at Maidstone, as will Johnsonville who host MSP at Pukehuia (formerly Newlands) Park at 1pm. Further down the table there’s opportunities for the current bottom four with the OBU Scallywags and Wellington meeting at MacAlister Park, and HOBM and Wests are at the Hutt Rec.