Skip to content
You are here
Home > Club Rugby > Sharp Axe: Burchett is back 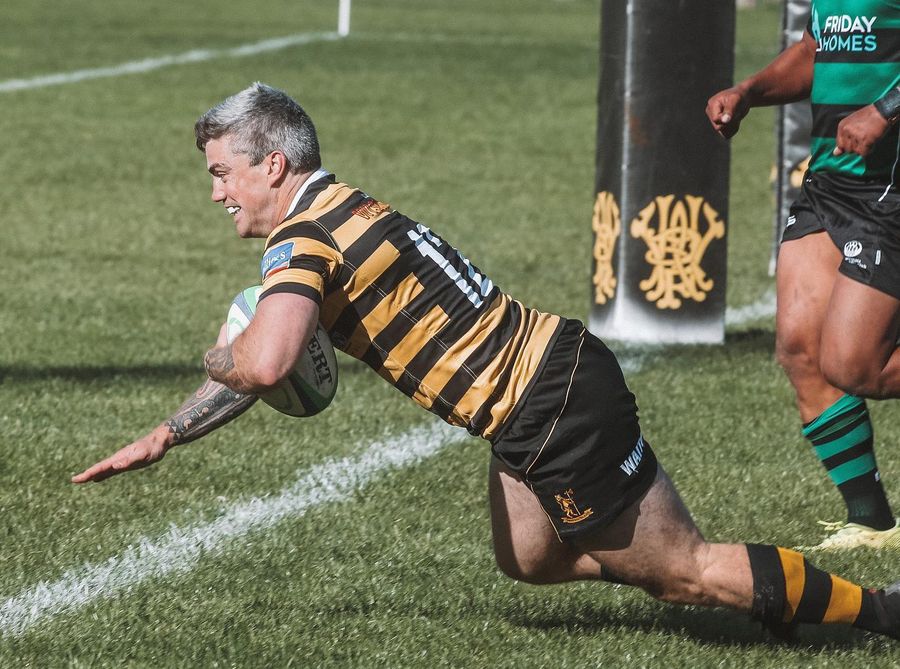 Ranui Burchett dives over to score his try against Wainuiomata in week two. PHOTO: Brad Roberts

Wellington Axemen co-captain Ranui Burchett will receive his blazer this Saturday for reaching the milestone of 50 games for the Premiers. He has also featured in a number of reserve fixtures.

The robust second-five has endured a mighty struggle to remain on the field. It might explain the recent emergence of grey hair.

“A week before my third season (2019) I rolled my ankle at training and thought it would be a normal injury. I ended up being out for 18 months,” Burchett explained.

“I was initially told I’d be out for four weeks but I rolled it the opposite way you normally roll it. A month later a scan showed the ankle was still swollen. I had torn tendons on each side and was in consistent pain. I had to learn to run again.”

“I was rearing to go at the start of 2020 and then COVID hit so that was another delay. It got worse when my father died a week before the new season started. I took a couple of months off to sort that out and didn’t regain my place in the Prems.”

Alongside Isaac Bracewell, Burchett is skipper in 2021. He scored a cracking try in a narrow defeat to Wainuiomata in the second round of the Swindale Shield, a performance which showcased the infectious optimism of Burchett.

“We got absolutely pummelled by Poneke the week before and managed to turn it around in two trainings. We put in a performance we could be proud off. We put ourselves in a position to win the game, but clumpy penalties and poor execution, things we can control, let us down.”

“Poneke played a lot out the back door. They were very quick and played a blinder. I felt we were better against Petone even though the score was similar. I didn’t help being yellow carded in the second-half.”

Wellington does not have a Colts team, but the Reserves have won two matches on the trot after a winless 2020. Attracting talent at Hataitai Park with no obvious feeder school and a number of city clubs to choose from is challenging. However, Burchett has been drawn from a league family in Christchurch.

“I didn’t play rugby until I went to Shirley Boys’ High School and started in the bottom team. I loved it straight away and made the First XV in my last year. I played for Shirley club for a few seasons and then when I finished my degree came to Wellington for work.”

Burchett is a lawyer for the Environmental Protection Agency and had a brief spell in Thailand teaching English. He made his Axemen debut in 2017 with two matches particularly holding a special place in his memory.

“We beat Wainuiomata in 2018, scoring a last minute try. I marked Peter Umaga-Jensen that day. The next week we beat Upper Hutt 49-47 under lights on a Thursday night at Jerry Collins. That was one of those wild games where anything could happen and it did. I think we lost track of the score for a while.”

“There is quite a difference between rugby in Wellington and Christchurch. In Wellington everyone’s got acceleration and power. You train to break the line and have to watch the feet and go in hard or you’ll get bumped off. In Christchurch you train to hold possession, control set-piece, kick for territory and take a penalty.”

“It was extremely shocking for a member of your club to go down doing something you do every day and that is representing your club with pride. It was cool to see how a support group and his family came together to put up a trophy honouring Daniel.”

“There is a lot of history and good people at this club. I am only captain to handle the talking but I reckon I’ve got the record for the biggest physio bill at the club. I still think we’ll win the Jubilee Cup too.”

Below: Burchett scores his try against Wainuiomata in week two:

Club Rugby Awards of the Year