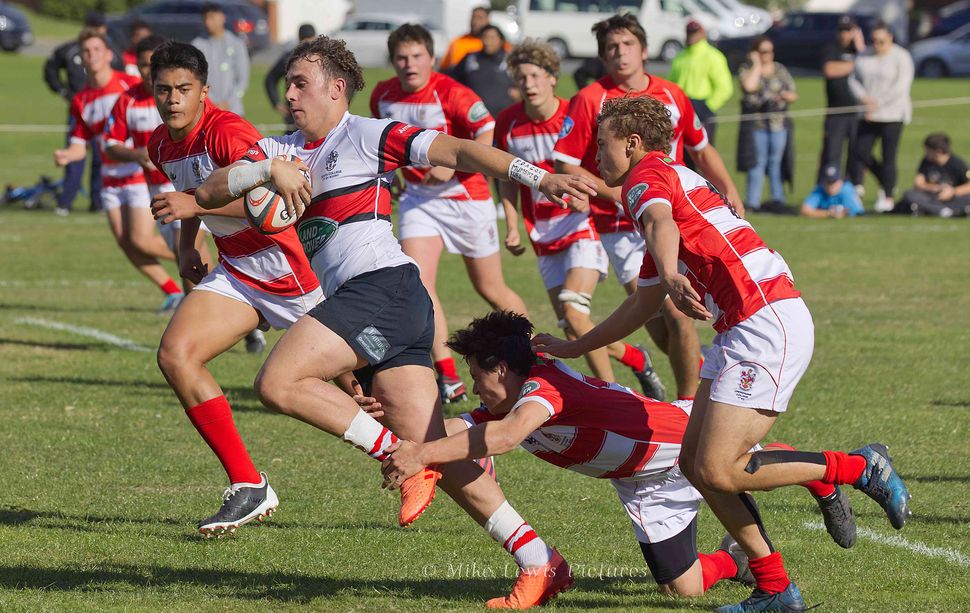 Hosts Scots College (Wellington) and four-time defending champions Saint Kentigern College (Auckland) will contest the annual Presbyterian Quadrangular tournament final after the first day of matches in Strathmore. On Friday the consolation final between St Andrew’s College (Christchurch) and Lindisfarne College (Hastings) will start at 11:00am with the decider to kick-off at 12:30pm.

In cool, clear conditions, both games followed a similar pattern. The victors skipped out to a large lead by halftime but were made to work hard to preserve their advantage.

A handful of tries in the first-half ensured St Kent’s a passage through to the final. Initially St Andrew’s started strongest and after five minutes were rewarded when workhorse No.8 Will Stodart bullied through congestion beside the posts.

St Kent’s regrouped swiftly with their fast and nimble backs deliberately stretching St Andrew’s to the edges.  The southern defence on the left side proved especially vulnerable and St Kent’s scored four of their first five tries moving in that direction.

Ironically, a lineout drive opened St Kent’s account before the slick backs went to work. It is hard to believe wing Siale Pahulu is only Year 9. The way he skinned his marker and dashed 60-metres was reminiscent of Suliasi Vunivalu in the same uniform.

Centre Xavi Taele was the most damaging of the northern backs. He scored the next two tries, both from past halfway, with a combination of pace, power, and timing. His second effort where he regained the ball after a juggle was especially noteworthy.

St Kent’s breached St Andrew’s on the right just before the break when the lively Eli Pearce skipped clear following more swift handling. The conversion from under the posts made it 33-5 at the interval.

Disappointingly a melee erupted shortly after halftime which saw Kawa Kiri sent off for punching. The St Kent’s blindside was perhaps unlucky to be the only player carded in the scuffle.

St Kent’s lost their cohesion and a fired-up St Andrew’s railed with Stodart and blindside Torian Barnes to the fore. Lock Ben Chittock scored a try to close the gap to 33-14 and when reserve Arthur Inkson slipped through the prospect of an improbable comeback wasn’t beyond reach at 33-21.

However, the authority of Stewart soon resurfaced with a superb cross-kick for Pearce settling the contest.

Pearce finished with a hat-trick as St Kent’s reserves added some late enthusiasm.

Lindisfarne scrapped valiantly, and actually won the second-half, but Scots always had another gear in this encounter.

The Wellington champions started at a breakneck tempo when left wing Rupeni Matele scampered clear from an attacking scrum inside the 22.

Lindisfarne was decidedly cagey with their strategy. Kicking often to turnaround the bigger Scots forwards was a smart ploy, trouble was the ball often found hand instead of land.

Lindisfarne was at their best when their forwards cradled together and launched pick and drives close to the ruck. Tighthead Sean Lagikula scored from this avenue as Lindisfarne halved the deficit.

The second-half was scrappy as the pace slowed and Lindisfarne was pesky at the breakdown.

When proceedings loosened however Lindisfarne was in retreat. Payano was ever constant and an audacious tap and go from near his own goal line sent Matele free for a thrilling coast to coast effort.

The final on Friday should produce plenty of points.

Bond Banter 29 March (News in briefs, rugby information from the ground up)