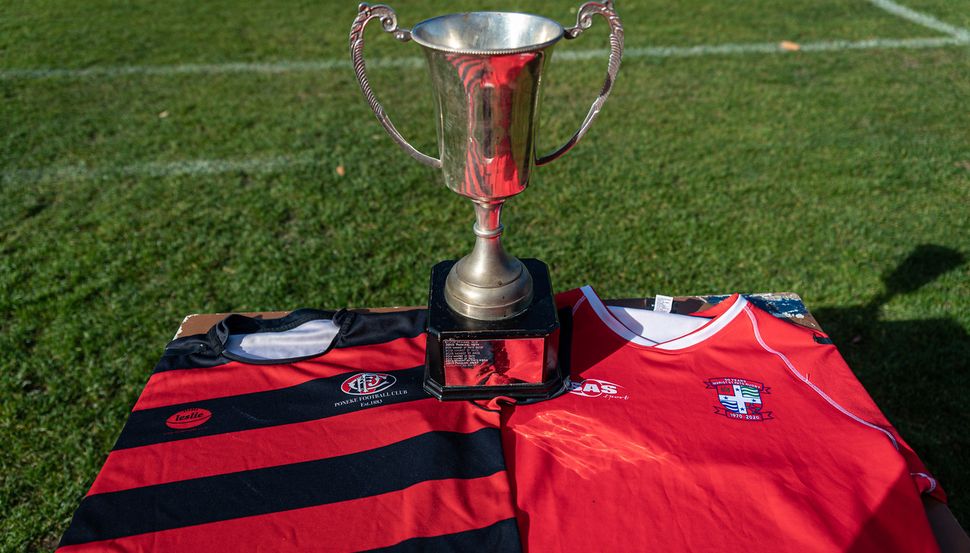 Saturday’s match for the Horan-Millar Trophy will mark 100 year’s since the first meeting at Senior A/Premier level between Marist and Poneke.

A century of rugby rivalry between two Eastern Suburbs rugby clubs – Marist-St Pat’s and Poneke – will be celebrated at Evans Bay Park this Saturday, kick-off 2.45pm.

In 1921 the Marist club’s Senior A team was elevated to the Wellington Rugby Football Union’s top competition.

Poneke had been battling it out since 1883 on the top playing fields in Wellington.

Poneke won the match 10-0 and went on to win the Wellington club rugby championship in 1921.

For the 1921 clash with Marist, Poneke fielded a team that included six former, current or future All Blacks, a North Island rep and six other Wellington reps.

A century after this match was played MSP will play Poneke in the Eastern Suburbs on May 1, 2021.

Senior and Premier matches between MSP and Poneke over the last 100 years have always been spirited affairs and this first match certainly set the scene.

It was not so much the players having a go at each other on the field; it was the spectators who caused the problems off it.

The Evening Post reported the two teams attracted a large crowd and the struggle would be remembered for a long time by those who saw it.

Marist put up a fine performance in their earlier pre-season senior match against Athletic and the fledgling club in the senior competition had a large following.

The big negative in this inaugural Marist versus Poneke game however was that play was interfered with by the spectators crowding onto the field.

Referee Joe Moffitt held up play often to enable the game to continue.

The crowd paid little or no attention to him and the solitary policeman present was helpless against them.

It was only as a result of both captains appealing to the sporting instincts of the unruly spectators that the field was left to the players, The Evening Post reported.

Interestingly, given where Poneke and MSP are based now, the 1921 game was played at Kilbirnie Recreation Ground.

The park had been created gradually over the previous two decades by reclamation from Evans Bay and Senior rugby had been played there since 1919.

It was the closest playing field to the Poneke gymnasium, 1km away at Waitoa Road, Hataitai, which Poneke had established in 1909.

Completion of the Hataitai Tram Tunnel had provided direct access to Hataitai from the city and was a catalyst for the club’s move to the Eastern suburb. Excavated earth from the tunnel was no doubt some of the earliest fill that went into Evans Bay to create the Kilbirnie Rec.

The Marist team’s Captain, James Troy, was a tall, regular try-scoring loose forward who had been a Wellington representative since 1918 while playing for Poneke.

Indeed, he had been the Poneke team’s Vice-Captain in the previous two seasons and had transferred to Marist in 1921 on their promotion to the Senior grade. Clearly, the intense rivalry between the two clubs that continues today was set in place from the outset!

Familiar Kilbirnie conditions prevailed for the 1921 match – a gale was blowing down the ground! Poneke scored their 10 points with the wind in the first half and managed to hold Marist scoreless through the second spell.

The Horan-Millar Trophy honours two great club men; former Marist player and later MSP coach Mick Horan, and Poneke legend and later life member Ken Millar. They locked horns many times in their careers on the field but were also good friends off of it before both passing away in 1982.

The trophy that bears their names was first played for in 2009. The first 12 winners are below:

Some notable Marist St Pat’s – Poneke matches from the ‘Today in History’ files:

31 March 2007: Poneke pip MSP 18-17. MSP take the early ascendancy and race to a 14-3 lead. Poneke close the gap and after halftime hooker Dane Coles links with fullback Tevita Latu in for a key try. No. 8 Chris Brightwell scores the winner with five minutes to play.

29 April 1983: Poneke beat MSP 22-21 with captain Grant Griffith potting a late 40-metre dropped goal for victory. MSP had led 21-0 after just 15 minutes, but Poneke had clawed their way back and they time their win perfectly.

19 May 1951: A reinvigorated Poneke defeat Marist Brothers Old Boys 17-11 in a rousing main match on Athletic Park , leading the Dominion to state that Poneke’s “intensive forward play that has dominated the game in recent years as well as anther sample of sparking back play common this season is putting them in good stead to challenge for the title this season.” Poneke do indeed win the Jubilee Cup later in the winter.

27 May 1989: MSP stun previously unbeaten Poneke 20-10. Poneke lead 10-7 at the break, but MSP wing Chris Welch crashes over and Poneke are cracked. Poneke’s loss sees Hutt Old Boys hit the Swindale Shield lead after they overcome Upper Hutt 25-7. Poneke and HOB will meet next week in a huge clash and the latter will win and take home the 1989 Swindale Shield.

6 June 1992: The value of a try has just been upped from four to five points and with it scores have noticeably increased. One example today is Poneke’s 35-35 draw with Poneke, MSP No. 8 Matt Christie scoring a last gasp try from a pushover scrum.

29 June 1996: A fired up Poneke set the blueprint for their Jubilee Cup title winning success later in the season, toppling defending champions MSP 26-9 – beating their cross-road rivals for the first time in three years.

3 July 2010: Poneke come from behind late in the match to pip Marist St. Pat’s 23-21. In a dramatic finish to their third round Jubilee Cup clash, Poneke come back from a 6-21 deficit after 75 minutes with two converted tries and a penalty at the death.

4 July 1987: Poneke hold recent Swindale Shield winners MSP to a 7-7 draw. MSP lead 4-3 at the break and most spectators expect them to ram home the second half advantage with the wind, but Poneke hold them out.

8 July 2000: Poneke upset previously unbeaten MSP 19-13 to propel them into the top four with one round remaining. Poneke’s forwards steamroll their opposites and secure victory by scoring off a lineout try in the corner. A fortnight later under lights at the new stadium Poneke will pip MSP 27-26 in their Jubilee Cup semi-final (and then miss out to Petone in the following week’s final).

14 July 2001: Poneke stand alone at the top of the Jubilee Cup standings, after beating MSP 24-8 today in the penultimate round. These two teams are destined to meet again at Wellington Stadium in a fortnight, and MSP will reverse this outcome then.

17 July 1943: The biggest club match in Wellington since 1939 sees the combined Poneke-Oriental side play “stirring rugby” and beat Marist Old Brothers in this match and thus capture the Jubilee Cup title. The Dominion reports that Poneke-Oriental “dominated” Marist, running out 14-8 winners. They score three tries, all through the forwards, and the margin of victory could have been greater if not for missed kicks. With five wins from five, Poneke-Oriental are unbeaten in the 1943 Jubilee Cup. The combined eastern suburbs side (merged due to WW2 and reduced player numbers) will defend their title in 1944.

31 July 1999: A superb first half forwards performance sets up MSP’s 22-16 win over Poneke in today’s Jubilee Cup final, which is notable for being the last match to be played on Athletic Park. Heading into the match, Poneke have conceded just four tries in their past 11 matches. But MSP cross for three tries in the opening 40 minutes and take a match winning 22-3 lead into halftime.

Lalaga sharing the love at Norths