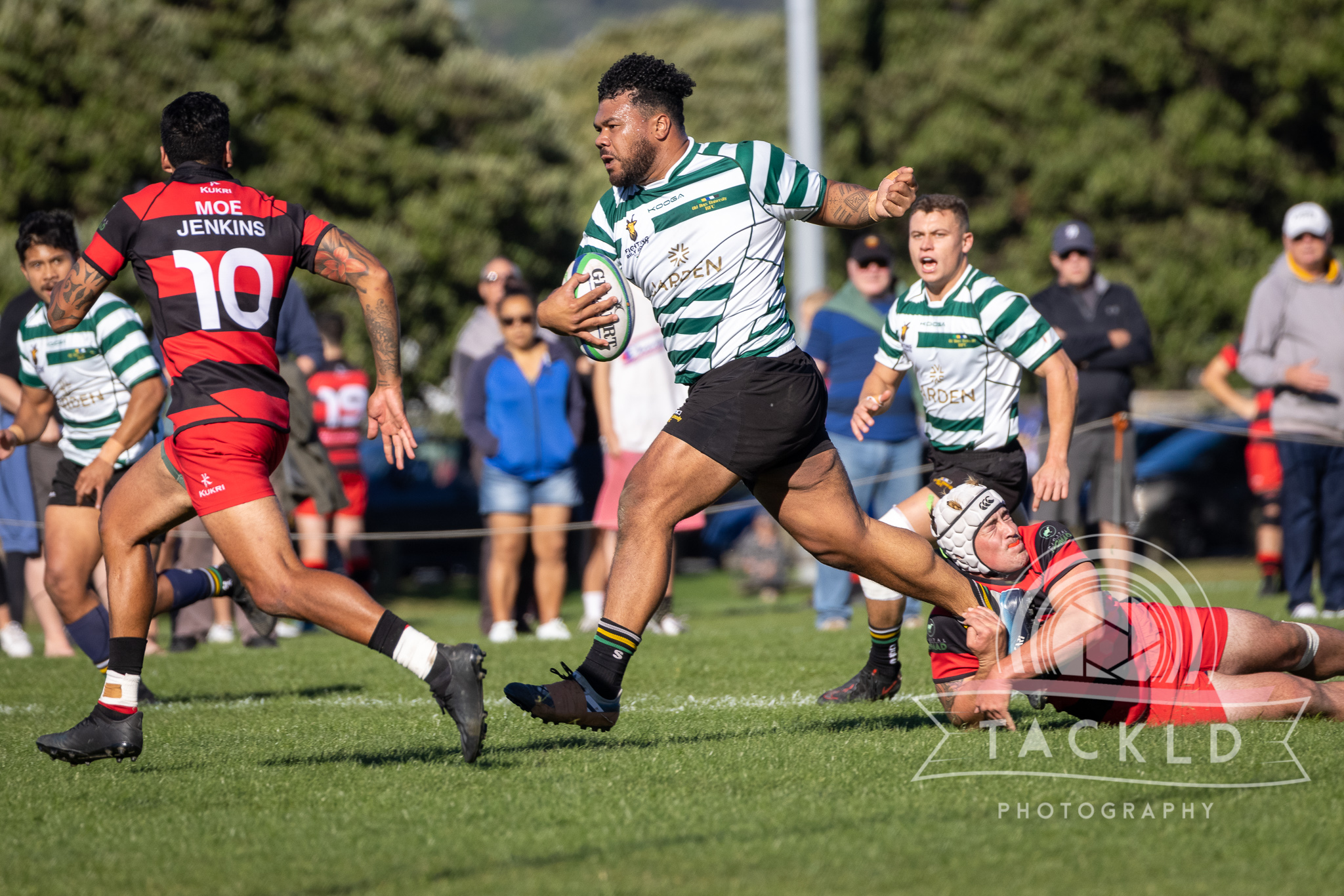 Five teams entered the third round of the Swindale Shield with unbeaten records, and those five remained unbeaten after a day of club rugby played in almost perfect conditions throughout the Wellington region.

On either side of Evans Bay, Marist St Pat’s and Old Boys-University were two of those teams. At Evans Bay, MSP, with Aiden Morgan back and running the show, were just too clinical for Norths, prevailing 45-25.

Tui Tuia crossed early for the home side before Junior Time-Tautoa levelled matters, but a pair of converted tries to veteran Ryan Setefano and Willie Schutz answered only by a penalty by Dale Sabbagh had them into a handy 21-10 halftime lead. Sabbagh would add a penalty before MSP put the game almost to bed with three tries in six minutes to Morgan, Ben Tuiatua, and Andrew Wells. Norths briefly threatened with two tries of their own before Rez Tasale had the final say.

On Kilbirnie Park, OBU efficiently and effectively squeezed the life out of Poneke en route to a 24-15 win, particularly in the first half where the home side struggled to make use what breeze there was.

Poneke were on the board first with an early penalty to Pakai Turia, but OBU’s set piece went to work with a well-disguised inside move to put Te Wehi Wright in before a more traditional one had Wirangi Parata over. The Goats repeated that dose after the resumption with Parata over for his second before Wright also scored his second minutes later. Poneke finally found some territory and possession and scored a pair of well-taken tries through Rhys Reiri and Caleb Robson but that was as close as it got with no further scoring in the last 20 minutes where the game lost some shape.

It was Old Timers’ Day at the Petone Recreation Ground, where the home team beat the Wellington Axemen 60-12 for the Bill Francis/Jack Taylor Trophy.

One of the themes dictating this match happened before kick-off, with the Axemen losing two of their listed forwards to injuries sustained whilst playing in the early game, in which the club’s second XV beat Paremata-Plimmerton’s 25-19. This forced two personnel and three positional changes to their pack.

In a similar pattern of play to the Upper Hutt Rams-Paremata-Plimmerton game (below), Petone won the game with a blitz of early scoring.

The next half hour was closer, as Wellington scored two tries, including a notable one to starting fullback, later halfback Isaac Bracewell.

Wellington then lost second-five Ranui Burchett to the sin-bin and in his absence Petone scored three further tries. All went unconverted, but 33-12 was now 48-12.

At the Polo Ground, Oriental-Rongotai retained the Ash Pointon Cup over a competitive Johnsonville.

Ories won 28-23, in a game that was always close after Ories led 12-6 and 12-9 earlier in the match by halftime, through two tries versus three penalties to Johnsonville halfback Mark Sutton.

The Magpies scored their next try immediately after halftime, to take a 17-9 lead, which was cut to 17-16 almost immediately with a converted try to Johnsonville blindside flanker Asafo Faamafu.

Ories pulled away again with a try and two penalties, before Johnsonville came back in the final few minutes with a try to right wing Knox Tuinasau. But they ran out of time and the home side held on.

The Upper Hutt Rams were the fifth side to keep their unbeaten intact after the first three rounds of the season.

The Rams beat the Paremata-Plimmerton Hammerheads 45-22 in an entertaining match in perfect conditions at Maidstone Park.

For the visitors it was a case of wishing the match had started on the half hour mark. At that point, the Rams had already run in four converted tries and led 28-3 and it was effectively game over.

After a moving Anzac Day ceremony pre-game, the Rams started with exuberance and purpose. First five-eighth Tynan Barrett crossed after an attacking lineout in the corner in the 5th minute to open the scoring action.

The Hammerheads replied with a penalty, there was an injury break as Rams No. 8 Josh Brown departed the field before a burst of three tries. Rams right wing Sione Uvea, halfback Kaide McCashin and lock Taine Tata all found the whitewash.

Down by four tries, Paremata-Plimmerton settled towards the back end of the first half and should have scored through their forwards before the break through a series of drives at the line.

The Rams scored their fifth try through prop Devon Healy-Mcdonald, Paremata-Plimmerton replied through blindside Hayden Stirrat from their scrum that was going well.

Rams hooker Eli Hunt was sinbinned for a big hit, but their response was to score a 50-metre try up the far side, with lock Tata crossing for his double and a popular try. Their fullback Tajun Crossland sliced through a hole shortly after and the Rams now led 45-8.

Pare-Plim took a quick tap penalty and replacement Tane McMillan-Parata scored next, and they finished the game with a try to No. 8 Peni Tapau after an injection by dangerous fullback Khya Wilson.

At a sun-drenched Lyndhurst Park, home team Tawa were coming off a loss and a draw to start their campaign so were eager for the win against Wainuiomata.

After turning down shots at goal, Tawa opened the scoring with a try to No. 8 Folau Vea off an attacking lineout, to see them go up 7-0 after 15 minutes.

That score remained over a lively next 10 minutes of play, culminating in a yellow card given against a Tawa player. Wainuiomata posted their first points on 28 minutes with a penalty to flanker Matt Jacobs.

Tawa left wing Adam Preston from an intercept against the run od play then scored to put Tawa ahead 12-3.

Wainuiomata turned down a shot at goal but got another penalty on halftime and kicked it to go into the sheds trailing 6-12.

Tawa opened the second half scoring early through No. 8 Folau Vea, his second for the day, converted by Hurricanes second-five Orbyn Ledger, to put them up 19-6.

Wainuiomata stayed in the game, but couldn’t capitalise. Tawa centre Pepesana Patafilo made a telling break but couldn’t convert this into a try.

They made sure of their next opportunity, with Lipa Saveatama on Premier debut scoring and then replacement outside back Randall Bishop crossing off a cross-kick to put the game beyond doubt at 33-6.

The final Premier match of the afternoon saw the HOBM Eagles beat the Avalon Wolves 34-7 for the interclub Billy Herbert Memorial Trophy.

At the Hutt Rec, the Eagles led 17-0 at halftime and doubled their scored in the second spell for a much-needed bonus point win.

For Avalon, their try was a penalty try in the second half.

Oriental Rongotai asserted their dominance of the Rebecca Liua’ana Trophy Division 1 with a resounding 66-5 win over a depleted Norths side that saw the match that saw Norths struggling for numbers. For Ories, fullback Ayesha Leti-iiga scored 4 tries in her first outing of the 2021 season, to continue her remarkable strike-rate of scoring in club rugby.

Things were more complete in the other match, with Marist St Pats winning 41-29 over Petone to record their first win.

The three Division 2 matches all went with the form book with last week’s winners all repeating that this round. Avalon beat Old Boys-University 49-10 last night at Boyd Wilson, HOBM were too strong for valley rivals Wainuiomata winning 43-14, and Paremata-Plimmerton were too fast for Poneke, cruising to a 67-10 win.

A bunch of contrasting results across the board in the Premier 2 grade.

Tawa were the big winners on the day in the Division 1 Harper Lock Shield, cruising past HOBM 63-3 and assuming top spot alone on the table after Norths went down to Ories with the Magpies winning 32-17.

It was closer in the other two matches with MSP just squeezing past Petone 25-24, and Poneke withstood a late siege on their goal-line to beat OBU 19-15

In Division 2 the two leaders had resounding wins. The Upper Hutt Rams were too strong for Petone White, winning 53-12, while in the late game Stokes Valley pitched a shutout at Delaney Park 39-0 over Avalon. In the other matches, Wellington kept pace with the leading duo in beating Paremata-Plimmerton 25-19, while points were hard to come by at Helston Park but Wainuiomata got themselves in the wins column edging Johnsonville 8-7.

Just two games in each division. At the Hutt Rec, HOBM and MSP battled out a match that looked likely to end in a draw until MSP kicked a late penalty notch a 25-22, while across the river Petone sent out a message with a strong 53-24 win over Tawa. Ories defaulted yesterday, handing the full five points to OBU Green.

The Petone Colts led 17-0 and then 17-14 at halftime, before finding another gear and pulling well clear in the second half against Tawa.

In Division 2 it was OBU Black and the Upper Hutt Rams with the wins. The students accounted for Avalon 35-19 at Kelburn Park, with the Rams overcoming a plucky Pare-Plim side by 31-22.

In the early game at Maidstone Park, the junior Rams held a 7-5 lead after half an hour’s play. They then scored consecutive tries started from deep in the 33rd and 38th minutes to pull ahead 21-5 by halftime.

Paremata-Plimmerton’s forwards rumbled over to score in front of the scoreboard in the 50th minute, cutting the lead to 21-10. The Rams rallied and scored their bonus point try to go ahead 26-10, before the visitors scored again to make it 26-17.

The game’s key try was scored by blockbusting centre Manase Taulanga who stormed through from first phase to cross to make it 31-17. Paremata-Plimmerton first five-eighth Brayden Kamana replied with a chip and regather off a scrum in midfield to give his side a bonus point from their outing at Maidstone.

In the lightweights, Avalon conceded their first points of the season, but their line remains intact after a resounding 45-6 win over previously also unbeaten Poneke.

That leaves the Wolves and Eastbourne as the two unbeaten sides after the Seagulls were defaulted to by Wests yesterday.

Elsewhere Johnsonville blew out HOBM by 54-3, the Upper Hutt Rams prevailed 17-12 over Wellington, and the OBU Scallywags got their first win beating MSP 31-12.