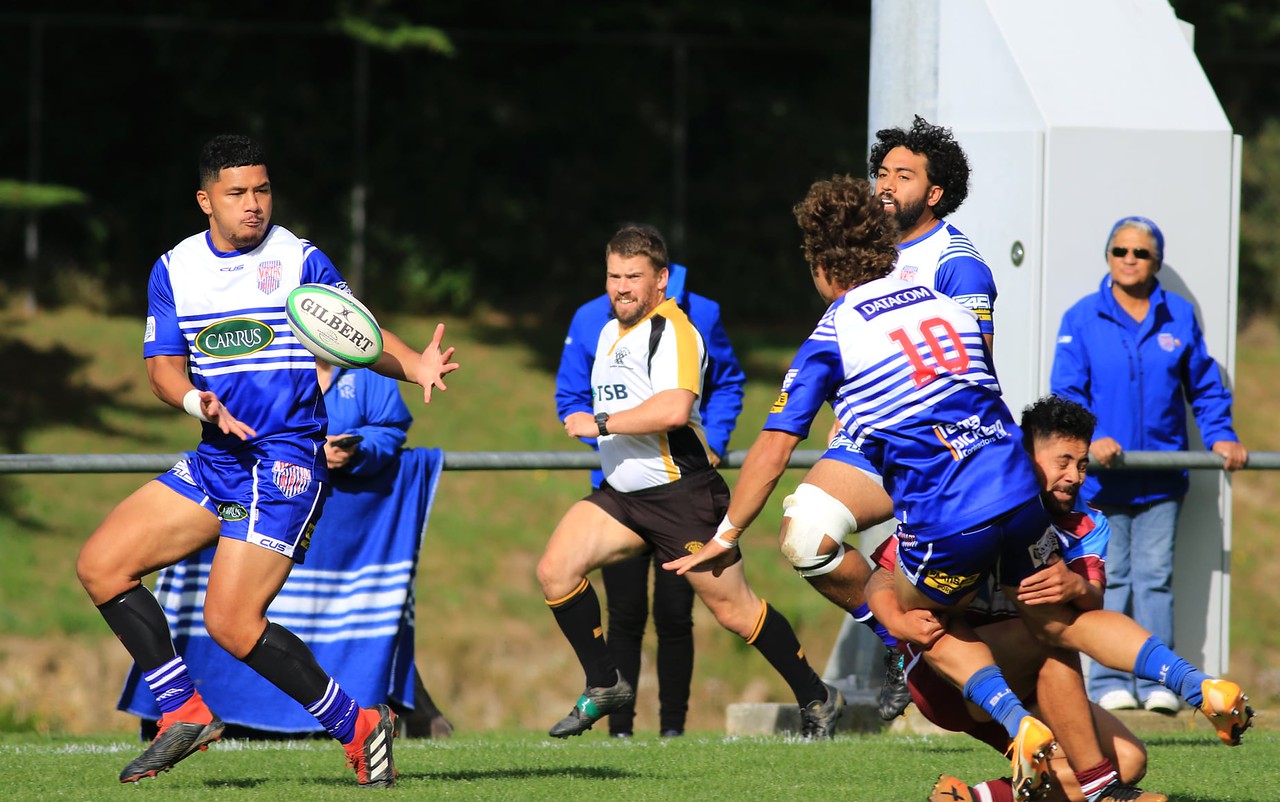 Te Upoko O Te Ika returns as the radio broadcast show for Wellington club rugby in 2021. The team commentates the Premier match between Petone and Wellington tomorrow. Details of how to listen are HERE

Week three of the season, and with the Colts and Reserve grades starting their competitions proper, it’s a full schedule this weekend bar the President’s grade so there’s plenty of action to keep an eye on.

Two rounds in and the table is taking shape, though perhaps not quite as many might have predicted.

At the head of it are defending Swindale holders Marist St Pat’s and the resurgent Upper Hutt Rams. Both are at home tomorrow, with MSP hosting Norths and the Rams are visited by Paremata-Plimmerton.

MSP had the relative luxury of being able to rotate their squad and still take the five competition points from their trip out to Ngati Toa a week ago. They know that won’t be the case tomorrow in one of the feature clashes of each season, with Norths having rebounded from their opening loss to OBU to put Avalon to the sword.

Looking to keep their place at top of the ladder, MSP bring back several of their frontline players, including Aidan Morgan who returns from the Hurricanes U20s to slot in at fullback. Andrew Wells moves to first five-eighth. In the pack, Tyrone Thompson comes off the bench to play hooker.

Norths won’t want to fall too far off the pace, and their starting side has just two changes with Boston Hunt in at lock and Luke Kapene at fullback with plenty of thump available from the bench as well.

Out at Maidstone Park, the Rams will look to continue their early-season form. They face a side that finished below them last year for the third successive week in Pare-Plim, before their schedule starts to look more difficult in coming weeks. Their side tomorrow again features all three Svenson brothers in the backline, with Scott (wearing 11), Josh (12) and Todd (13) all starting.Daniel Schrijvers and Tafa Tafa sit in the stand this week.

Pare-Plim’s already thin squad has taken another couple of hits this week, so erstwhile hooker Jimmy Moore is again pressed into service in the loose trio but its another robust tight-five and the experienced veteran heads of Johnathan Sabo and Blake Neve in the backline.

The eastern suburbs are a busy place on the Premier front tomorrow with matches at both Kilbirnie Park and the Polo Ground as well as Evans Bay. At the former, Poneke plays host to Old Boys-University with the pair having come out on the opposing sides of close scorelines a week ago; Poneke falling to Petone by a single point while the Goats got home by three at Wellington College over HOBM. Poneke are without both of their try scorers from last week with Andrew Jones and Jimmy Hewitt absent. The returning Psalms Latu covers the latter with Jacob Turrell getting the nod for his first cap at hooker, joined by Jack Loader who earns the same at No. 8. OBU hand a Premier debut to Hurricanes U20s player Dominic Ropeti at lock, and hand the keys in the halves over to Matt Fowler and Malo Manuao.

Through the cutting in Miramar Oriental Rongotai face the visit of Johnsonville. The Magpies are unbeaten through the opening rounds, albeit unlike those ahead of them with a draw on their record after a hard-fought outing against Tawa a week ago. In years past the Hawks would have been seen as an easy five competition points, but the Helston side appear to be a different proposition this year, stiffened by a core of players for whom the Polo Ground is familiar territory. A quartet of those – Ha’amea Ahio, Paula Kinikinilau, Aukuso Tuitama, and skipper Andy Ellis – all start in an unchanged 22 for the visitors.

Ories welcome back some players from the Hurricanes U20s, including former Scots College loose forward Sione Halalilo who makes his Premier debut at blindside flanker. Jonty Bird who makes his starting debut at hooker and Ethan Webster-Nonu who comes off the bench. AJ Va’alepu has been playing Premier rugby since 2010 (for Norths until this season) and he makes his first Premier start at first five-eighth.

On the opposite side of the harbour Petone will be looking to keep pace at worse when they welcome Wellington onto the Petone Rec. The Villagers have shown their mettle so far in their hard-fought wins over Tawa and Poneke, and will be hoping for an easier time of things tomorrow. The Axemen though were a much-improved outfit against Wainuiomata after their first-round horror show against Poneke, and perhaps a lack of recent experience in winning positions cost them a week ago. Petone hand a debut to Silverstream standout Peter Lakai, back from Hurricanes U20 duty, as well as a first start to Neyla Masima who was a late withdrawal a week ago. Outside back Ben Brooking starts at halfback, Jarrod Adams returns on the wing, and they again have the services of Vince Aso. Wellington have lost Vaea Fifita back to the Hurricanes with his place in the loose taken by youngster Davis Eni while this week’s backline sees Issac Bracewell and William Cosgriff swap jerseys.

The other two matches feature sides that have had slower starts than they would have like so far. Across the Hutt River at the Hutt Rec, both Hutt Old Boys Marist and Avalon go in search of their first wins, though the form book so far would be in favour of the home side despite that. The Eagles were perhaps unlucky against OBU, and seem to have taken the opportunity to rest some players with neither of the Manaia brothers nor Brandyn Laursen named, but a first start for last years St Bernard’s 1st XV captain Jono Little on the flank.    The Wolves would have been disappointed with their effort against Norths and won’t need to be told an improvement is a must. Sefo Aumua returns and there’s starts for Jacob Faifai and Phil Green in the pack and Fau Fotu and David Saumolia in their back division.

Finally with a loss and a draw so far it hasn’t been the start Tawa would have set for themselves. They are back at Lyndhurst for the visit of Wainuiomata, and as well as the pressing need to turn their season around for the sake of their Swindale aspirations there is the need to atone for last year’s Hardham Cup semi-final loss to the same opposition. For their part Wainuiomata got into the winners column with their close-run win over Wellington, and a repeat of last September’s result would be the obvious target. Tawa give a first start to 2020 Wellington College 1st XV George Sims at halfback with Kemara Hauiti-Parapara moving out a place to be their third first-five in as many weeks in a largely unchanged side.

Wainuiomata are missing last week’s workhorse No. 8 Teru Time, but welcome Wellington Lions openside flanker Sam Smith, and his combination with the vastly experienced Greg Lealofi and Matt Jacobs in the loose forwards will be key for their chances of toppling the hungry Tawa on Lyndhurst. Uale Mai runs the cutter at first five-eighth and experienced John Monu marks Hurricanes Pepesana Patafilo at centre. Marvin Karawana lines up on Wainuiomata’s bench to add steel from the reserves.

There are no fewer than six interclub trophies in play in tomorrow’s Premier matches, with all but the Upper Hutt Rams vs Pare-Plim game having silverware at stake.

All seven matches are at the normal 2.45pm kickoff time, with the Petone vs Wellington match the radio feature this week with Gordon Noble-Campbell on Te Upoko 1161AM.

It’s a bit of a scrambled draw this week owing to the split in the grade, with some Premier 2 teams being in quite different locations to their senior sides. In the Division 1 Harper Lock Shield Tawa and Norths are the remaining unbeaten teams, and they’re at home against HOBM and away against Ories respectively. The other two games feature sides in the chasing pack with Poneke and OBU clashing at Kilbirnie Park, and Marist St Pats heading out to Petone to take on the Villager’s Blue side on the Rec.

In Division 2 Stokes Valley and the Upper Hutt Rams have already put a break on the rest. The Rams head down the valley to take on Petone White, while Stokes Valley are at home on Delaney Park for the local derby against Avalon (2.45pm kickoff). Johnsonville are at home against Wainuiomata at Helston, while Wellington and Paremata-Plimmerton have agreed to meet on neutral turf at the Petone Rec given where their respective Premier sides are playing.

All games are at 1pm, unless stated.

The feature clash of the day in the Division 1 Rebecca Liua’ana Trophy is the first of at least three meetings this year between Oriental Rongotai and Norths, with this instalment on the latter’s turf at Porirua Park. In the other match in the division, Petone and Marist St Pat’s each go after their first win when they meet on the Petone Rec.

In the second week of matches in Division 2 it’s a case of first-up winners against those that lost last Saturday. Avalon head into the city to take on Old Boys University at Boyd Wilson tonight at 7.30pm, while tomorrow Hutt Old Boys Marist welcome fellow valley side Wainuiomata to the Hutt Rec (10.30am kickoff), and Paremata-Plimmerton are at home on Ngati Toa Domain for the visit of Poneke.

Unless stated, matches are 11.30am kickoffs tomorrow.

With grading now complete, 13 teams will take the field in the Age Grade competition this season. Division 1, which will compete for the Paris Memorial Trophy, comprises six teams though just two matches will go ahead tomorrow, both in the Hutt Valley. Petone are at home against Tawa while on the other side of the river HOBM host their Marist cousins MSP.

In the Division 2 JRD Cup there’s also just a pair going ahead with the Upper Hutt Rams hosting Pare-Plim at Maidstone and OBU Black and Avalon taking to Kelburn Park. Johnsonville has the first-up bye.

Unfortunately circumstances have rubbed out the other two matches. Ories have defaulted their Division 1 opener against OBU Green after a death in their community this week, something which Club Rugby understands has also affected Poneke’s ability to field a team for their Division 2 match away to Wainuiomata and they too have defaulted. The four matches going ahead are all 1pm kickoffs.

The other story here though is who is not entered. As mentioned in Monday’s column, last year’s runners-up Norths – who had two Colts teams a season ago – are not part of this year’s competition which seems a stunning turn of events.

Through two rounds three sides are unbeaten in the lightweight grade and two of those – leaders Avalon, who are yet to concede a point, and Poneke – meet in the game of the day at Kilbirnie Park. Eastbourne are the third unbeaten team and they’ll be favourites at home on HW Shortt against Wests.

The eastern suburbs will be the place to be for fans of the grade as in addition to that top-of-the-table clash, MSP and OBU are in action on Evans Bay (at 1pm) while up the road at Hataitai Wellington faces the Upper Hutt Rams. The fifth match is at Helston Park, where Johnsonville hosts HOBM.

Unless noted all matches are at 2.45pm.