Skip to content
You are here
Home > Club Rugby > This week in club rugby history: 19-26 April 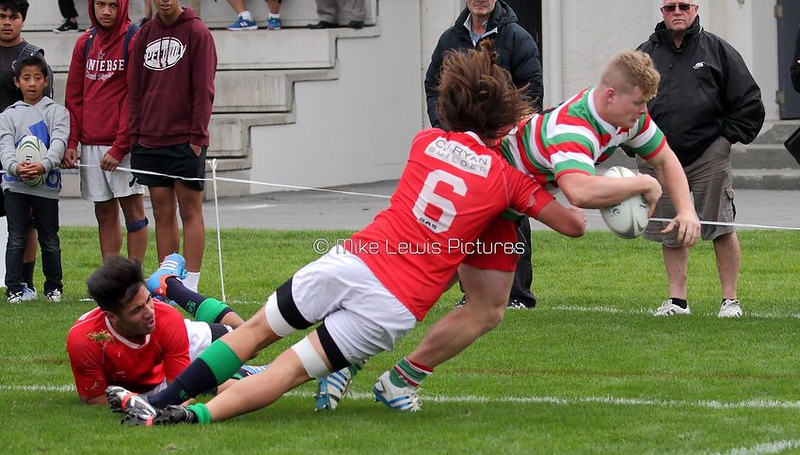 Hooker James O’Reilly scored two tries for the HOBM Eagles in their 54-49 Anzac Day win over Marist St Pat’s in 2015. HOBM went on to win the Swindale Shield and MSP were runners-up.

Traditionally a super-busy week in Wellington club rugby – below are some of the many highlights from the past this week.

1986: Allan Hewson kicks exactly half of Petone’s points in their 48-0 win over Paremata-Plimmerton; Upper Hutt’s Sam McLean kicks 19 points in his side’s 51-4 win over Porirua and MSP’s Ross Bond kicks 16 points and wing Chris Welch scores a hat-trick in MSP’s 36-16 win over Wests.

2008: Wellington Lions No. 8 Alex Tulou and Samoan international first five-eighth Fa’atonu Fili produce the magic that sees MSP snatch a thrilling 25-22 win over Northern United on their Old Timers’ day at Evans Bay Park. Tulou scores two tries in a matter of minutes early in the second half, both off the shoulder off Fili, and Fili kicks both conversions as well as two late penalties that help turn the game around and earn victory for MSP after they fought back from a 15-0 deficit at halftime. MSP go on to win this year’s Swindale Shield.

1985: Paremata-Plimmerton are on their way with their maiden Swindale Shield win, beating Titahi Bay 19-18 in a nail-biter. Fullback Tony Saunders kicks a last-gasp penalty. Other matches today are also close – Avalon and Poneke drawing 6-6, MSP edging Wests 18-15 and WCOB defeating Ories 18-12 on penalties.

2002: Late comeback wins for MSP and Petone are talking points. MSP come back from a 13-17 deficit to overrun Old Boys University 30-17 with a late flurry of scoring and Petone trail Rodney So’oialo’s Wests 3-18 at halftime before winning 33-29.

2019: The Upper Hutt Rams break a 27-game duck in Wellington Premier rugby this afternoon by beating Marist St Pat’s 26-25 in their fifth round Swindale Shield match. In windy conditions, the Rams come back in the last few minutes to seal an unlikely victory after MSP has built up a 25-16 lead their pack has dominated the Rams since late in the first half  First five-eighth Tyler Tane judges a sideline conversion perfectly in the crosswind to cut the home side’s lead to 25-23 with barely a minute to play. From the kick-off, the Rams work their way up field one final time and are awarded a breakdown penalty 40 metres out dead in front of the poles. Tane, a former MSP player, steps up and bangs the penalty over to give his side their first Premier victory over MSP since 2002.

1951: Poneke open their season with a 24-17 win over Hutt, the vigorous play of their forwards, led by No. 8 Jim Grbich, paving the way for victory. Elsewhere, University convincingly beat Marist Brothers Old Boys 11-3.

2001: An edge of the seat thriller as MSP beat Tawa 27-25. MSP lead 21-3 at the turnaround, but Tawa hit back and they take a 25-24 lead after Junior Togia scores. MSP work their way up field and wing James Reilly snaps the winning dropped goal with time almost up.

2014: The Johnsonville Hawks swoop on the Ories Magpies at the Polo Ground today, kicking a late penalty to win the game 19-16 and grabbing their maiden Swindale Shield win of the season and first Premier rugby victory in eight years. Johnsonville brreak a 16-16 deadlock to win the game with time almost up, winning the Ash Pointon Cup off Ories and breaking a 23-game losing streak dating back to their 20-17 win over Ories at the Polo Ground in April 2006.

1987: A 75th minute penalty try breaks a 19-19 deadlock and gives Hutt Valley Marist a 25-19 win under lights at the Hutt Rec tonight. South African import Mark Carlson scores 13 of Hutt Valley Marist’s points and Bernie Fraser has had a hand in one of the game’s key tries.

1989: Ories continue their winning ways, beating MSP 19-3 in front of a monster Polo Ground crowd of 3,500. Elsewhere, University score their winning try from a controversial forward pass in their 13-9 victory over Porirua – Titahi Bay United.

1998: Northern United spring a major Swindale Shield surprise, beating MSP 13-10 in this midweek fixture under lights at the Hutt Rec. Norths lead by the final score at halftime and hold on throughout the second half. Hooker George Ape scores their only try and halfback Glynn Ford kicks the extras.

2003: All Black Pita Alatini scores a stunning 40-metre individual try for Norths in a big midweek 13-5 victory under lights. The sixth round win propels Norths towards their maiden title, while Poneke lose their first match of the year.

1954: Back-to-back defending champions University beat Oriental 23-17 in today’s season opener thanks to a 90-metre runaway try to All Black wing Ron Jarden. But other close results indicate that the students won’t have it all their own way this season.

2004: They were wooden-spooners last year, but HOBM lead the Swindale Shield and are unbeaten after four rounds after seeing off Petone 27-17 in a classic McBain Shield clash at the Petone Rec. Blindside flanker Polonga Pedro is the individual star, scoring two tries, while lock Doug Power and halfback Nick Risdon are influential as the Eagles soar to a 17-0 lead by halftime. Petone come out firing, but HOBM hang on in the second half.

1972: Both unbeaten after three rounds, Petone and Wellington square off in this heavyweight Anzac Day fixture. The outcome is a draw, with Petone scoring seven points in as many minutes to lock it up at 13-13. The battle of the halfbacks, Dave Henderson (Wellington) and Ian Stevens (Petone) is absorbing.

2013: The power and passion of Tawa’s forwards eventually win over Norths at Lyndhurst Park, rumbling over for the winning try a couple of minutes from the end to win 28-27 and capture the Sammy Saili Memorial Shield.

2015: HOBM take home the Father Cleary Shield and also defend the Bill Brien Challenge Cup with a remarkable 54-49 victory over previously unbeaten Marist St Pat’s, coming back from a 10-29 deficit, and Tawa defeat Johnsonville for the Carman Cup with a last-gasp James So’oialo 50-metre penalty to win 18-15. Oriental-Rongotai break Poneke’s hearts, with first five-eighth Trevor Marama kicking an extra time penalty to give them a 28-27 Jimmy Grbich Shield win.

2017: The Upper Hutt Rams are the day’s biggest winners, while Oriental-Rongotai and Poneke finish all square in two of today’s ANZAC Day Swindale Shield matches played in glorious sunshine.The Upper Hutt Rams defeat Avalon 72-6 to retain the Harper Vine Trophy, Ories and Poneke finished their match for the Jimmy Grbich Shield locked up at 30-30. Trailing 25-30 late, Ories halfback Adam Deck ducks under a ruck and slices through on a 20 metre run to score under the poles. But his handy conversion is charged down by the Poneke players.

1952: University set alight the new season with a dazzling 37-0 win over playing through champions Poneke. Poneke loose forward Jim Grbich goes within a hair’s breadth of opening the scoring in the early exchanges, but its University from then on. Flanker Bill Clark is everywhere and left wing Ron Jarden scores two tries and kicks five conversions.

1958: Halfback Vince Bevan is prominent in Poneke’s 11-6 win over WCOB in the main game at Athletic Park. The curtain-raiser for this match? The second hockey Test between New Zealand and Pakistan. The two teams battle out a 2-2 draw in front of 8,000 sports fans.

2014: The Hutt Old Boys Marist Eagles come back from 17-40 down to bonus point 41-40 winners over the Upper Hutt Rams. Seemingly down and out, the Eagles lay on three converted tries and then a penalty on the stroke of fulltime to Glen Walters to win the game.In another stunning last-gasp win today, Old Boys University halfback-turned first five-eighth Tomasi Palu kicks the match winning penalty with the final play of the game to give Old Boys University a 30-29 win over Marist St Pat’s.