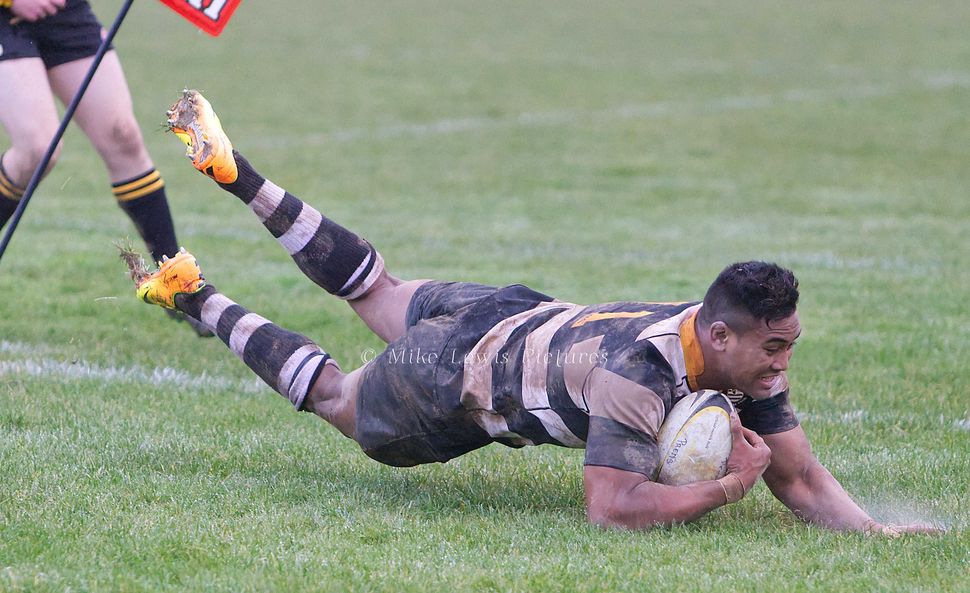 The second photo in this series is from 2013 in the seventh and final round Jubilee Cup match between Oriental-Rongotai and Old Boys University.

In this photo, Julian Savea crosses for a key try in the Magpies’ 26-10 victory over the Fighting Billy Goats.

Ories and OBU ended in joint third on the points. OBU had a more favourable points for/against difference, but this win was the tiebreaker. OBU would venture to Lyndhurst Park to play first round winners and top qualifiers Tawa, while third placed Ories booked a trip to the Hutt Rec to play Hutt Old Boys Marist.

In this game, Ories started the game brightly, but it was OBU who scored the first try when lock Dan Mellon crossed the line.

OBU missed 11 points in goal-kicking chances and had halfback Luke Campbell spill the ball over the line at the start of the second half.

This seemed to rattle the home team as they conceded seven penalties in a row and lost a player to the sin-bin. From there, Ories pulled clear. Ellis scored his second try and Savea scored his seventh try in four matches against OBU.

He was unavailable for the final owing to All Blacks commitments as Ories lost 26-21 to Tawa who won their first Jubilee Cup.

Savea had made his Wellington club rugby Premier debut for Ories in 2009 and immediately stamped his mark on the Swindale Shield when he crossed for five tries as a left winger in his second Premier start to help Ories to a 78-17 win over Old Boys-University.

Savea was coming off his third season with the Hurricanes. the year he was joined by his younger brother Ardie in Super Rugby.

Julian had made the NZ Secondary Schools side as a year 12 player in 2007 and later was the 2010 World Rugby Junior Player of the Year.

In 2010 he made his first-class debut for Wellington, scoring a try in his first match against Canterbury and he scored eight tries in 12 NPC matches.

He made his All Blacks debut on the wing against Ireland at Eden Park in June 2012. It wasn’t just any debut either, Savea joined a selected group of players to score a hat trick of tries on Test debut and he became the first All Black to score three tries in a Test against Ireland.

Savea kept his international try-scring radar switched on – he went on to play nine Tests in 2012 and score nine Test tries. He subsequently played a major role in the All Blacks in 2013, ending that year with 19 tries in 20 Tests.

In 2014, he and Beauden Barrett were the only two players to start in all 16 matches for the Hurricanes, Savea bringing up a half century of Super Rugby appearances in the process.

In 2015 he returned home a Rugby World Cup Champion, later moving to France and returning home again to link with the Wellington Lions in 2020 and the Hurricanes in 2021.

The 31-year-old has gone to become the second most capped Hurricanes player (along with midfield legends Conrad Smith and Ma’a Nonu) with 126 caps, behind only former captain TJ Perenara with 140 appearances.

Last week, Savea signed with the Hurricanes for another two years.