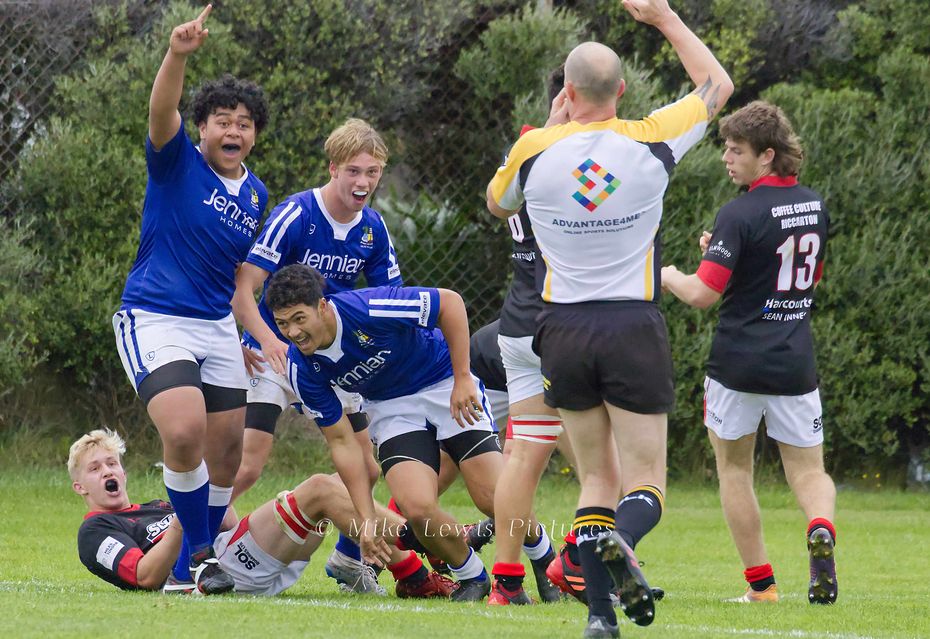 With time expired, Town second-five Cam Burgess nailed a sideline conversion, right beside the corner flag on the 22, to secure the tie.

First-Five Junior Telea had scurried his way to the line after hurried hands caught the visitors short out wide.

Moments earlier No.8 Jeremiah Collins caught a bounce from a St Bede’s lineout at his own 22 and burst to exactly the opposite spot.

Bursts of brilliance followed by sustained periods of struggle was the predominant theme for the hosts.

With 15 minutes remaining St Bede’s led 34-23 and dropped the ball over the line.

St Bede’s was quick to regroup after a shaky start and bustling blindside Ben Shipley employed every ounce of his small frame to battle over and level the scores.

St Bede’s first-five Mason Allison looked to be an assured player and his right boot kicked St Bede’s into a 10-7 lead.

Burgess responded with two strikes of his own to make it 13-10. The latter of those opportunities followed a textbook turnover he attainted.

Town’s ruck defence was worryingly weak and the organised St Bede’s attack was able to make easy yards up the middle. Fullback Isaac Hutchinson, and Shipley again, scored to propel St Bede’s 20-13 ahead.

An unfortunate error would invite Town back into the contest. While trying to deflect the ball back into the field of play from a penalty kick to the sideline, a St Bede’s defender instead slapped the ball into his own in-goal area and conceded a five-meter scrum. Wing Daniel Tafili crossed from a scrum movement and it was 20-18 at halftime.

St Bede’s stretched their lead to 27-18 upon the resumption with Shipley denied a hatrick by a whisker, but larger No.8 Christian Ioane too hard to stop.

Again St Bede’s lured Town from a slumber. A simple drop at halfway was toed ahead by Burgess who forced a five-metre scrum. With the scrums now uncontested Collins without resistance made it 27-23.

Most of St Bede’s reserves were run with prop Suliasi Fiava busy with the ball in hand and on the scoreboard with about 20 minutes left.

At 34-23, St Bede’s should have put Town away but there was enough individual flair within the Town roster to keep things interesting. With ten minutes to spare a penalty try was awarded to Town after a dash for the corner was ended with a no-arms tackle.

Allison kicked a second penalty to make it 37-30 before St Bede’s again left the door ajar with the miss-timed lineout that ended with Burgress brilliance.

St Bede’s retains the trophy at stake between the two teams. A traditional played from 1920 to 1973, it resumed again in 2016 and St Bede’s have retained the trophy four times in the last five years.

St Bede’s plays the second leg of their Wellington tour on Friday against St Pat’s Silverstream (match details to be confirmed).

The two teams were:

The Wellington draw is still a few weeks away from being finalised, but the Crusaders region draw is out. Round one matches on 8 May are below:

Axemen to have a Crack at Nelson in special sesquicentennial clash