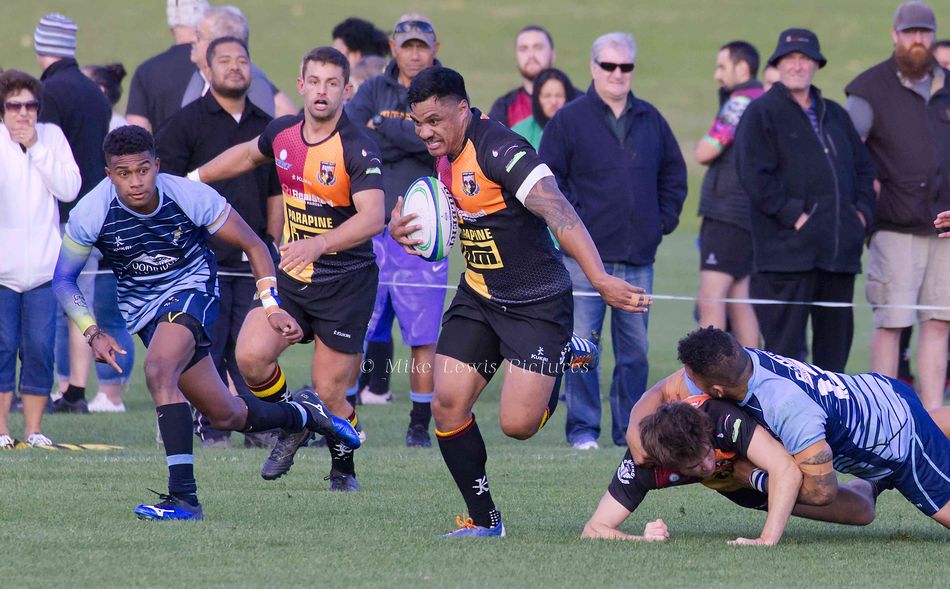 The first iteration of the Story below, and the results on our website, showed Tawa beating Ories 20-17. This was based on online results we saw on Saturday night, which we go off. This is now changed to reflect a 19-19 draw between Ories and Tawa.

Five of the seven second round Swindale Shield games in Wellington on Saturday went down to the wire, with little separating the sides on fulltime.

Petone, the Upper Hutt Rams, Old Boys University and Wainuiomata all came out on the winning side of the ledger in tight and willing matches, while Ories and Tawa drew their game, in matches played around the region in fine and windy conditions.

At the Petone Recreation Ground, the home side defeated long-standing rivals Poneke 18-17 for the F.J Tilyard Memorial Shield.

Poneke’s first five-eighth Pakai Turia missed a penalty with 30 seconds left on the clock and the Villagers held on to win their second straight tight match to start their campaign.

In a close match throughout, Petone No. 8. Tupou Sopoaga and second five-eighth Regan Waiwai who made made a number of breaks in midfield. Both had strong games.

Playing into the wind in the first half, Poneke opened the scoring. They dominated territory and the possession stats in first spell, leading 10-3 at halftime.

Petone weathered the storm, making some personnel changes, including moving starting fullback Ben Brooking to halfback. A measured second half from Petone meant they did enough to take the Tilyard Shield home for another year.

Johnsonville were unlucky not win against a scrappy Upper Hutt Rams at Maidstone Park on Old Timers’ Day.

First five-eighth Tynan Barrett kicked two penalties in the first 15 minutes to put the home side ahead 6-0. Hawks halfback Mark Sutton kicked a penalty to close the gap to 6-3 midway through the first half.

In the 25th minute, Johnsonville took the lead when centre Aukuso Tuitama scored an intercept try from halfway. The conversion made it 10-7.

Just prior to the break, Todd Svenson scored for the Rams, converted by Barrett, putting the Rams up 13-10 at the interval.

The Rams also scored a try at the very start of the second half, converted from the sideline by Barrett to make it 20-10.

The Rams proceeded to lose their concentration, and were to concede two yellow cards. Johnsonville closed the gap to 20-16 through two Sutton penalties. Barrett then kicked another penalty to make it 23-16.

The momentum of the remainder of the match was all with Johnsonville, dominating the scrums and keeping their discipline. The most dramatic moment of the game was when No. 8 Bodene Davis broke from a lineout, ran from 22 to 22 and threw a pass that was knocked on by flanker Ofa Ueseli and if it had stuck they were in.

Sutton kicked his third penalty to close the difference to 23-19. The Rams lost their two players to the bin but the Hawks were unable to break through again.

The Eagles scored the game’s first try, to take a 7-3 lead midway through the first half. OBU came back to edge the match for the Wood Cup and in a Bill Brien Challenge defence.

Oriental-Rongotai and Tawa drew 19-19 at the Polo Ground.

The game went down to the wire, with Tawa winning a penalty from 45 metres out and kicking for touch but then turning it over.

At Hataitai Park visitors Wainuiomata clung on to register a 16-14 win over the Wellington Axemen in their Bill Jones Cup clash. The outcome came down to the final moments with the Axemen attacking inside Wainuiomata’s 22 through two consecutive scrums and with Hurricane Vaea Fifita launching himself off the back but unable to create any magic for his team. The second of these saw Wainuiomata win a defensive penalty and escape up-field and the whistle blew for full time.

It was a game of missed opportunities for the home side who were left rueing several other chances earlier in the match to put points on the board.

Earlier in the game, the Axemen had made a terrific start. With the moderate wind at their backs, first five eighth Ben Stowe kicked an early penalty, followed by second five eighth Ranui Burchett cutting through Wainuiomata’s 22 and slipping off would-be tacklers to score, to put them up 8-0. However, the conversion from a handy angle was missed.

The Axemen opened the second half scoring with a second penalty to halfback Isaac Bracewell and they led 11-10.

The second half proved a ding-dong battle as both sides struggled for dominance. The Axemen should have scored their second try from a concerted raid inside the 22, but, as  prelude to the events at the end of the game, failed to make hay on their chances.

Wainuiomata flanker Matt Jacobs kicked a penalty to put them up 13-11 followed by a penalty to Bracewell and they then led 14-13.

Now inside the final 10 minutes both teams raised their intensity. Wainuiomata, led by the ever-industrious No 8 Teru Time, stretched the Axemen almost to breaking point with another strong incursion which was thwarted. But they won another penalty and Jacobs kicked what proved to be the winning kick. The match wasn’t over, and this time it was the Axemen to launch a furious last-ditch assault but they couldn’t add the finishing touch.

The Premier 2 curtain raiser at Hataitai was also a thriller, with this time the Axemen holding on and winning 25-19 –  with two very late penalties giving them the edge. The Axemen had led 19-17 at half time but Wainuiomata with the wind broke through to score two tries to level the scores at 19-19 late in the game. After missing one penalty, the Axemen kicked another to re-rake the lead and then added a second on fulltime.

The other two Premier Swindale Shield fixtures were won comfortably by the victors.

At Porirua Park, Northern United made up for not scoring any points last week to put 70 on the Avalon Wolves. Norths led 27-7 at halftime and went on to win 70-7. Avalon’s one try was scored by second five-eighth Ale Peni.

Up the road at Ngatitoa Domain, Marist St Pat’s beat Paremata-Plimmerton 46-14, pulling away after leading 29-14 early in the second half.

In Men’s Division 2, Wellington beat Wainuiomata 25-19 (as above), Stokes Valley beat the Petone Brotherhood 43-7, the Rams thrashed Johnsonville 74-7 and Avalon and Paremata-Plimmerton met.

In two Women’s club rugby games side-by-side at Kilbirnie Park, Norths beat Marist St Pat’s 42-10 in their division one clash. Playing into a cool wind, Norths were fast out of the blocks and scored two early tries to go 12-0 up. The first half was punctuated by several injury breaks, before MSP hit back with a spectacular long-range chip-and-chase try.

Norths pulled clear in the second spell with several more tries into the wind, to win their second straight match with a four-try bonus point.

Fullback Tyler Bentley scored four tries and set up another to cap a memorable blazer milestone game for her side.

HOBM scored three first half tries and led 17-5 at half time with Poneke openside flanker Ateca Rainforth crossing for a well-worked try off an attacking scrum right on the interval.

Now with the wind in the second half, Poneke remained competitive and scored their second try, but Bentley and the HOBM backs ran in four more tries. Poneke had the last say, scoring their third try on fulltime.

In other division 2 matches, Paremata-Plimmerton, with their new recruit Thamsyn Newton at first five-eighth, beat who old side Old Boys University 48-5, and Avalon pipped Wainuiomata 24-22.

In the first game of the day in town, St Pat’s Town defeated Marlborough Boys’ College 52-7.

Town outscored their Tasman visitors 8 tries to one in a cool cross-wind at Evans Bay Park. The game was played in four quarters and Town led 7-0 after the first quarter, 21-0 at half time, 26-7 at three-quarter time, and raised their half century with their final try of the game on fulltime.

In a patchy pre-season contest, Town’s strong scrum and aggressive defending proved the difference against Marlborough who were playing their first pre-season game of the year together.

Marlborough returned home this afternoon on the ferry to continue their build-up to the Crusaders region competition, and Town have a short turnaround before their next match on Thursday against Christchurch visitors St Bede’s.