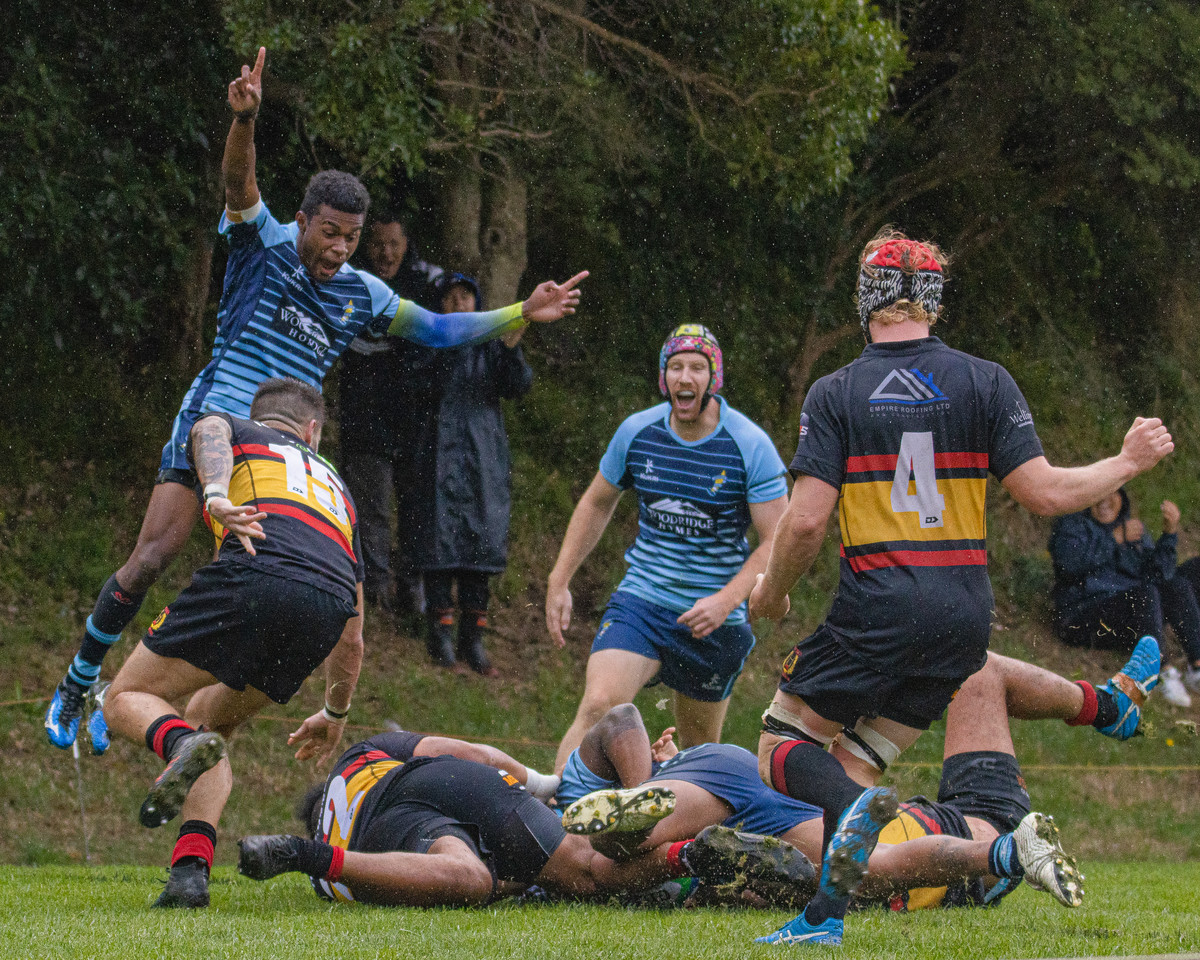 Johnsonville will be jumping for joy if they make it two from two this weekend when they play the Upper Hutt Rams away, while Paremata-Plimmerton return home to face defending first round champions Marist St Pat’s. PHOTO: Natural Light Photography Company.

Te Upoko O Te Ika returns as the radio broadcast show for Wellington club rugby in 2021. The team commentates the Premier match between the Upper Hutt Rams and Johnsonville tomorrow. Details of how to listen are HERE

UPDATED: Week two of the season and it’s a full slate of club games across the region tomorrow from Premiers to Presidents and everything in between. At the sharp end of the Swindale Shield, some teams will be looking to get a break over the majority while others will be looking to avoid being left behind, while in the Women’s grade the six Division 2 sides get their seasons underway.

It’s a milestone day for two players in those Premier ranks. Firstly Wainuiomata’s Jean Oti brings up 100 appearances for their Women’s side in their match against Avalon, and that will be followed by Paremata-Plimmerton’s stalwart prop Teariki Kie Tonga reaching a century of Premier outings when they face Marist St Pats at Ngati Toa Domain.

Club Rugby also sends their best wishes to long-serving player Luka Gibb and his family as he recovers from serious injuries suffered in an accident last weekend.

One match doesn’t make a season, but Poneke were impressive and ruthless against Wellington last Saturday and will be under no illusions to the scale of the task when they travel out to face Petone at the Rec. In contrast, points were anything but free-flowing for the Villagers with four Carne Green penalties and a stout defensive effort being enough to get past Tawa.

Petone shuffles their deck for their first home game of the season with Nuri Kaya and Neyla Masima – who scored a hattrick in the 2018 College Final before a two-year stint with the Warriors – making their first starts, while it’s a case of if it’s not broken then don’t fix it for Poneke, who make just the one change to their starting side with flyer Suitulaga Filemoni coming onto the wing after his two tries from the bench last week. Hooker Andrew Jones earns his 50th cap for the Kilbirnie side.

The two long-standing clubs also have silverware up for grabs as they’ll contest their FJ Tilyard Memorial Shield. Fred Tilyard played for four Poneke title-winning teams, was a Wellington rep and an All Black in 1923. He was later a club administrator for 20 years and one of four brothers who all played at representative level; Harry and Brun were Wellington reps, while Jimmy also made the All Blacks. Petone are the current holders after winning 28-20 last year.

The only other match between sides that were both successful in the opening round is at the head of the valley where the Upper Hutt Rams play host to Johnsonville at Maidstone Park. With each having signalled they aren’t going to be pushovers this season, one will end up tomorrow night in some fairly rarified air that neither has been in for some time.

The Rams will be well prepared after subduing Avalon, and they welcome back co-captain Aiden Woodward after he turned out for the second side last week. Also notable is the composition of their back three with Scott and Josh Svenson on the wings and Todd at fullback. Johnsonville can go back-to-back for the first time in many, many years, and their side for tomorrow is bolstered by the inclusion of the well-traveled Ha’amea Ahio with their Irish duo of Mark Sutton and Niall Delahunt continuing in the halves.

Old Boys-University is on home turf tomorrow, though rather than the usual surrounds of Nairnville Park it’s Wellington College that will play host. Hutt Old Boys Marist are the visitors and they’ll be looking for a different outcome to their trip into the city last week where they were largely squeezed out of the game by MSP. They’ll be up against a Goats side that stifled and stonewalled the normally efficient Norths attacking machine, so what transpires tomorrow will be of interest around the province. OBU are all but unchanged, starting the same XV as last week with their only alteration being the inclusion of Reece Plumtree on the bench, and includes James Poloniati after he signed with Manawatu for the NPC during the week. The Eagles make several changes, adding considerable size with the returns of the Manaia brothers to the front row and Mika Alaifatu to the back of the scrum, and Brandyn Laursen and Tomasi Alosio pair up in midfield.

There are two trophies in play in this fixture tomorrow. One is the Bill Brien Challenge Cup which OBU will be defending after having held onto it throughout all of last year, while the other is the Wood Cup which is held by HOBM after their 21-17 win last year and honours

Ron Wood, who was a founding member of the Woburn club which became High School OB that in turn merged with the Hutt club to form Hutt OB in 1967.

Two teams that will have different points to prove clash at the Polo Ground. Oriental Rongotai will want to show that last Saturday’s impressive win over Wainuiomata is their new standard while Tawa will want to show that their loss at home to Petone was just a blip to start the season. Outside of the loose forward trio the Magpies are almost unchanged and bolstered by the inclusion of one of their Hurricanes with Alex Fidow starting upfront with Herman Seumanufagai, fresh off scoring a boatload of tries for the victorious Central Districts U20 League side, making his return to club rugby from the bench. Tawa again have the services of their Hurricane with Pepesana Patafilo moving to centre this week, but it’s a different side in terms of both personnel and positions and they’ll look to the pairing of Kemara Hauiti-Parapara and Luke Cummings to steer them around the field.

Following up their win over HOBM, Marist St Pat’s hit State Highway 1 and head for Ngati Toa Domain to face Paremata-Plimmerton and make it two-from-two. The home side will be determined not to be a pushover however, and have the added motivation of Kie Tonga’s 100th game even if the odds seem greatly stacked against them. Hammerheads coach Justin Wilson has rotated his small squad and their side includes sons Jay at centre, Khya on the wing, and Brandyn on the bench, with bullocking forward Peni Taupau starting at No8. MSP have rung the changes, something their squad depth allows them to do (perhaps with an eye on the Prem 2 match at Porirua Park), but also have plenty of firepower on the bench should it be required.

Just back down that same road, Norths host Avalon at Jerry Collins Stadium where each side will be looking to get off the mark for the year. Norths will have been somewhat deflated by their loss to OBU and they’ll look to make amends for their faithful against last year’s wooden-spooners. They get a boost with the inclusion of Lions prop Josiah Tavita-Metcalfe and winger Junior Time-Taotua who was on Sevens duty last weekend, with former schoolboy standout Ropati So’oalo making his first Premier start on the other wing.

In some contrast, the Wolves will be buoyed somewhat by their efforts against Upper Hutt and while they didn’t get the win, they know they have a foundation to build on this term. They’ve named a stable team that’s largely unchanged from a week ago, with Greg Gouws making a first start at lock and Akuila Alatini moving to the back of the scrum, with seasoned campaigners Thomas Kiwara and Site Timu coming in at first-five and fullback respectively.

Lastly, there are the two sides that suffered the heaviest defeats of the opening day meeting when Wellington host Wainuiomata at Hataitai Park. The Axemen were simply unable to get into the game against Poneke and they’ll be looking for both territory and possession and making use of it tomorrow, while for the visitors an improved defensive effort would seem to be in the cards after what happened last week. The big news here is the inclusion in the Axemen side of Hurricane and former All Black Vaea Fifita, who’ll start at No8 in his first outing for the club since June 2016. Ben Stowe is handed the #10 jersey to partner Issac Bracewell with William Cosgriff shifting to fullback. Wainuiomata have made several changes themselves, with starts for Matt Jacobs, Jordan King, and Caleb Nicholas amongst them.

There is an interclub trophy at stake here too; the Bill Jones Cup that honours one of Wainuiomata’s greatest supporters from their early days. They also hold it after their 37-14 win last year.

As normal all seven matches are scheduled to get under at 2.45pm.

The feature game of the day in the second-tier Division 1 Harper Lock Shield is the rematch of last year’s Ed Chaney Cup final between Norths and MSP at the JCS after both had victories by similar margins on the opening weekend. The other two winners from a week ago, Ories and Tawa, also meet over at Polo so there’s an opportunity for two teams to stretch out a margin at the top. Looking to avoid falling too far are OBU and HOBM who provide the early entertainment at Wellington College and Petone and Poneke who clash at the Rec.

It’s that same story In Division 2 as first up winners Stokes Valley and Petone White meet in a 2.45pm kickoff at Delaney Park, as do the Upper Hutt Rams and Johnsonville at Maidstone. Wellington and Wainuiomata will be looking to get off the mark when they clash at Hataitai, with Pare-Plim hosting Avalon in the fourth match of the round.

Apart from the Stokes Valley match, all are 1pm kickoffs.

The Division 1 Rebecca Liua’ana Trophy is into its second round tomorrow. Oriental Rongotai are at home to face the challenge of Petone, while Norths aren’t too far away as they take on Marist St Pat’s on Kilbirnie #2.

The six Division 2 sides get underway with their opening matches of the season, playing a single-round robin. Old Boys-University welcome Paremata-Plimmerton to Nairnville Park, Poneke are at home on Kilbirnie for the visit of Hutt Old Boys Marist, and there’s a Hutt Valley derby between Wainuiomata and Avalon at William Jones which gets underway at the earlier time of 10.30am.

Bar the last match above, all are at the usual 11.30am kickoff time.

The second-round in the lightweights is headlined by the rematch of last year’s championship final with the Upper Hutt Rams and Eastbourne clashing at Maoribank Park in a 1pm meeting. Also at that time another perennial contender, Avalon, are scheduled to meet the OBU Scallywags at Fraser Park. In the 2.45pm slot there’s one game in the Hutt when HOBM hosts Poneke, and two in the city with Wellington taking on Johnsonville at Kilbirnie Park, and Wests line up against MSP in the cage at Ian Galloway.

The Colts and Reserve Grade are in a second week of grading ahead of competition commencing next weekend.