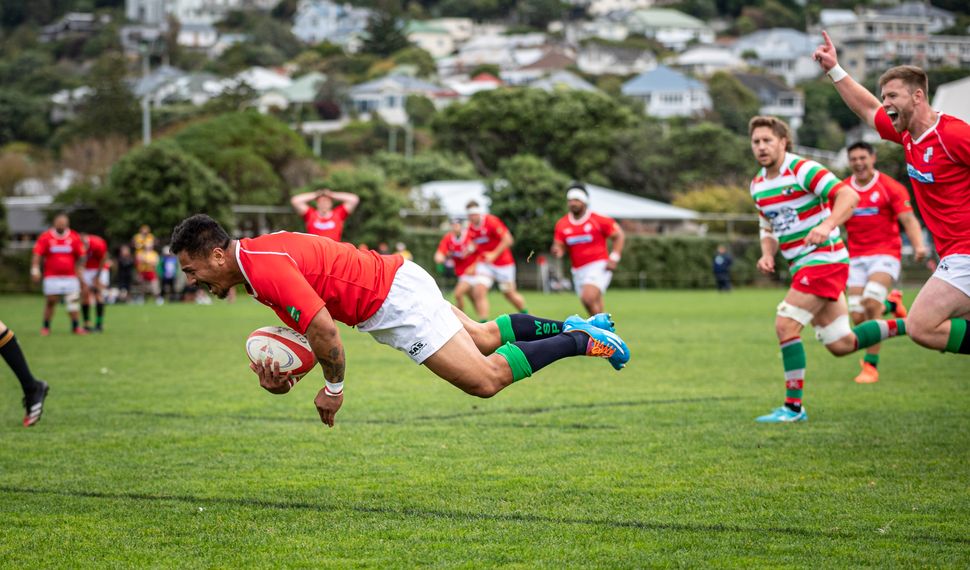 Results and Standings at: http://www.clubrugby.co.nz/wellington/games-results.php?competition=1&season=18&round=1

It was a mixed bag of results to open the 2021 Wellington Premier club rugby season on Saturday, with four of the seven winners collecting four try bonus points and three teams held try-less and two of these point-less.

On Wahine Day, it was almost all Poneke as the home side swept aside the Wellington 68-5 at home at Kilbirnie Park.

The Axemen made a bright start to have a try through prop Joe Reid in the first few minutes, but from that point Poneke dominated possession and territory with the wind behind them, taking a penalty by Pakai Turia and four tries before the break, including a penalty try to lead 25-5. The hosts were even more dominant in the second half, scoring 7 tries without response including doubles to fullback Nick Robertson and replacement winger Suitulala Filemoni to run away as 68-5 victors.

Poneke’s near-neighbours Marist St Pat’s and Oriental-Rongotai also had solid opening day wins on a cloudy, drizzly day around the region to open the season.

Across the road at Evans Bay Park, defending first round champions MSP held off Hutt Old Boys Marist 25-3 to retain the Father Cleary Shield. MSP lead 14-3 at halftime, extending their lead to 20-3 midway through the second half and scoring another try to make the game safe.

Oriental-Rongotai made the trip to William Jones Park and beat Wainuiomata 37-19, to open their account with a four-try bonus point win.

At Fraser Park, the Upper Hutt Rams beat the Avalon Wolves 49-28 in their match for the Harper Vine Shield.

At Helston Park, the Johnsonville Hawks overcame the Paremata-Plimmerton Hammerheads 36-20, in a competitive match that saw the visitors in the game for long periods, before the home side rallied in the second half to pull clear, scoring their last try of the game on fulltime.

Johnsonville’s first try in this match was a penalty try, while centre Andy Ellis converted his own try and Johnsonville were up 14-0 in as many minutes. Paremata-Plimmerton scored the game’s next two tries, one midway through the first half and the other early in the second.

The other two Swindale Shield fixtures were torrid affairs that failed to raise to any great heights as spectacles. Nor were scoreboard operators kept busy.

At Lyndhurst Park, visitors Petone beat Tawa 12-0, all the scoring in the opening 20 minutes of the game and all through penalty kicks.

Playing with the moderate wind in the first half, Petone made a busy start to the match and chirpy first five-eighth Carne Green struck four penalties.

A scrappy, error-ridden match between two willing packs threatened to come alive late in the first half when Tawa had their best chance to post points but somehow Petone hung on after a lineout drive and a series of penalties conceded inside their 22.

Petone tighthead Alipati Soke was then sin-binned, but Petone still kept their line intact and in fact marched up-field and Green missed a fifth penalty just prior to the break.

Both sides started the second half with positive intentions, but the scrappy nature of the game continued and the drizzle that arrived made the surface slippery and neither could get on top.

Two Hurricanes were playing, Vince Aso for Petone and Pepesana Patafilo for Tawa, but neither could sway proceedings. Aso was subbed in the second half and Patafilo’s frustrating day on the left wing ended with his sinbinning with the last play of the game.

Worryingly, both sides appeared to lose players to shoulder injuries, with Petone blindside Jarrod Hrstich departing early in the second half and Tawa tighthead prop James Coburn late in the contest.

The Northern United – Old Boys University match at Porirua Park for the Ken Douglas Trophy started late owing to an injury in the first women’s match of the day and no posts up on the number 2 field so no game could be moved.

The Jubilee Cup final replay promised to be a blockbuster, but instead became a grim struggle in horizontal rain and fading light. Old Boys University were deserving 18-0 winners, Norths failing to score a single try for the first time since they lost 3-19 to Ories in Round 3 of the 2016 Swindale Shield. That’s 92 matches ago.

OBU cast an anchor inside Norths territory for most of the first-half using their superior lineout to apply pressure. Locks Caleb Delany and James Poloniati were commanding throughout, and the loose forward trio were all busy and abrasive.

The first try scored by wing Ty Poe was a cracker. Centre Izzy ‘fortress’ Foai busted at halfway before attracting the attention of two defenders and flipping a right-handed offload from his hip to Poe who dashed free, chipped the ball over the fullback, and regathered in motion to touchdown. Callum Harkin converted from the sideline and it was 7-0.

Had centre Regan Verney (not to be confused as the twin of Tom Robinson) and Poloniati held the ball while clear the score could have been much larger in the students’ favour.

Shortly after halftime Sam Reid chipped over a close-range penalty goal to make it 10-0. Norths enjoyed a sustained period inside the visitors 22 but seemed unusually bereft of ideas. Another Reid penalty made it 13-0 with about 20 minutes remaining.

The Norths bench added some noticeable energy and their scrum was a positive until they became uncontested.

At the Polo Ground Oriental Rongotai, shorn off of the trio of Ayesha Leti-l’iga, Joanah Ngan-Woo, and Fa’asua Makisi who were all playing in the Sevens event at Hataitai, was forced to work hard to subdue a gallant Marist St Pats by 33-29.

Things were more straight forward for Norths, outsourcing Petone six tries to one in a 36-7 win, though the match was marred by an injury to Norths No.8 Xavier Tusa which delayed matters by up to an hour (see above).

Norths broke out of their own territory, with tighthead prop Dora Laupola making a big charge up field, to score their second try to go 12-0 up.

The increased this lead to 17-0, with their third try scored on the right wing after a penalty and lineout on the grandstand touch corner.

Petone had their chances and should have scored their first try out wide after a penalty and sustained attack inside the 22. They were attacking before halftime when the injured Norths player fell in a heavy contact situation and halftime was eventually called.

The six-team Division 2 competition gets underway next week.

Norths got their defence of the Harper Lock Shield underway with a hard-fought 22-17 win over OBU, while Marist St Pats likewise prevailed in an arm-wrestle 24-20 over HOBM. The other two results were something wider margins with Tawa coming out on top 27-12 over Petone Blue at Lyndhurst after leading 20-12 at halftime, while at Kilbirnie Park Oriental Rongotai got the chocolates 31-8 over Poneke.

In Division 2 there were handy wins for Stokes Valley – 22-8 over Wainuiomata – and Johnsonville 48-13 over Pare-Plim. Petone White had to survive a late flurry from Wellington to hold on 28-23, and the Upper Hutt Rams eased home 20-8 over Avalon.

Just the four games ultimately played in the Colts grading. Tawa were too strong for Avalon winning 79-19, Poneke beat Pare-Plim 38-5, and OBU Black were too good for Upper Hutt with a 43-20 win. HOBM beat Wainuiomata 29-7 while MSP one by default over Johnsonville after the latter turned up with too few players for a match.

The Upper Hutt Rams got their title defence underway with a 26-13 win over MSP. Eastbourne edged Johnsonville 17-14 and Poneke came away with an 18-12 win over Wellington, while Avalon were untroubled with a comprehensive 61-0 win over Western Suburbs. HOBM won the other fixture, though without having to leave the house after OBU defaulted yesterday.

Eagles clip Tawa’s wings as one of three unbeaten teams