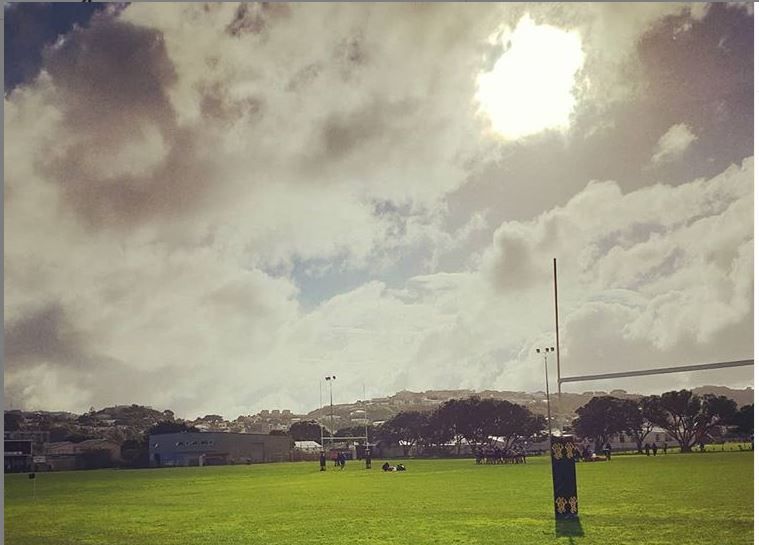 Heated action from the 2020 Premiership First XV final at Porirua Park, that saw Scots College edge St Pat’s Silverstream 24-21. Many of the players that contested the final are joining the Wellington cub rugby ranks this year. A look at some of them below.

After a couple of weak years previously, Wellington Secondary Schools rugby was more competitive and stronger in 2020.

This time last year the country was in level 4 lockdown, but a full season of local Premiership First XV rugby and some representative and school sevens rugby towards the end of the year was all played in 2020.

Increasingly so, younger players are making a bigger impact and there are some promising prospects to keep an eye on in club rugby in 2019.

For an example of a player who could go from the school classroom to shouldering the hopes of a famous old rugby club in the space of a few months look no further than Riley Higgins.

The St Pat’s Silverstream midfielder is the younger brother of Kienan who featured in this article three years ago and went on to play 41 Premier games for Norths before heading to the Hawke’s Bay this year.

Riley Higgins has all the attributes of a player who could go far. With pace, vision, light footwork and a sound managerial game, he has already featured strongly this year in Wellington Academy representative teams and is a leading pick in the recently selected Hurricanes U20 team. In school rugby in 2020, he scored 15 tries and was the top points scorer in the competition with 138.

Petone will hope they have him for much of the season, to replace several departing backs such as the two Willies, Fine and Tufui, who have headed to Otago.

Higgins was one of three players to make last year’s NZSS Schools ‘Paper’ team (no games). The others were Scots College’s Hanz Leota (joined the Auckland Academy) and St Pat’s Town’s Siale Lauaki (returning for his final year in school in 2021).

A few players were also selected in the ‘Paper’ NZ Schools Barbarians side and will be joining club rugby this year.

Along with Lauaki (above), prop Bradley Crichton anchored the big St Pat’s Town front row last year, that was favoured to in some quarters but failed to make the straight final that was instead contested between winners Scots College and St Pat’s Silverstream.

Crichton is joining Northern United this year and could get plenty of game time at Jerry Collins Stadium in the Premier ranks.

A promising player making the reverse journey into town for club rugby is last year’s Aotea College captain Owen Wright, who was a lynchpin in his school’s midfield and the team’s leader. Losing the Beard Trophy to Porirua College in his final outing in blue was disappointing, but Old Boys University know the meaning of success and the Goats environment will be a perfect place for him to shine.

OBU have also acquired the services of lock/flanker Dominic Ropeti, younger brother of back Alex. Dominic was Scots’ captain last year and he is a player with a high workrate and good skills who can genuinely fill lock or flanker.

A fourth player out of Wellington to make last year’s ‘Paper’ schools Barbarians team was Christian Stenhouse, but the Town flyhalf has shifted south to Dunedin for study and rugby.

Like Ropeti, St Pat’s Town’s Rory Woods can play lock or flanker. He was injured throughout much of the 2020 Premiership season but returned to play sevens for Town and this year has been playing for the Wellington Academy team. The Wellington Axemen have picked up a bright prospect for their mid-term future.

Jono Little joins nearby Hutt Old Boys Marist out of St Bernard’s College He is an athletic and skilful loose forward who’s robust carries, strong defence, and leadership helped St Bernard’s achieve their best Premiership placing since 2012 last year. The New Zealand Under 18 softball captain was a nominee in the allrounder category at the College Sport Wellington awards.

Peter Lakai was the forwards captain of St Pat’s Silverstream last year and knows his way over the advantage line. The No. 8 joins Petone this season and should go well in club rugby.

Sione Halalilo is another No. 8 with good skills and an explosive running game. The Scots College alumni joins Ories this year, along with wing Herman Seumanufagai out of St Pat’s Town and Scots College teammate and prop Jonty Bird. All three could feature in the Magpies Premier plans in 2021.

Lipa Saveatama has raw size and power and could be a handful to contain when his game develops further. The Mana College leaver will get that opportunity in the Tawa forwards factory whom he has joined this year.

Khya Wilson joins Paremata-Pimmerton out of St Pat’s Town. The outside back will be raring to go after missing much of last year’s First XV season with a hand injury. Wilson joins his brothers Justin and Brandyn and coach Justin Senior at the Hammerheads. He has spent two years in the Centutions U18s and also has an athletics background.

Jabez Peniata is another player heading to Tawa who will be one to watch in the coming seasons as he transitions from school to senior rugby. Lock or loose forward Peniata was playing in Porirua College’s First XV as a year 10 and grew in stature as an on-field leader.

Nasser Tato is also joining Tawa out of Palmerston North Boys’ High School. The big loosehead prop was a cornerstone of a strong PNBHS First XV over the past couple of years, competing in the strong Super 8 competition, and the former Hurricanes age-grade player could go well in the physical Wellington club rugby competition.

Treyah Kingi-Taukamo is another player joining Wellington club rugby from out of town. Originally out of Napier Boys’ High School, he was drafted to Auckland’s St Kent’s in 2019 and made the NZ Schools Barbarians team that year. The Auckland school season got cut short in 2020, so he comes to OBU and the Wellington Academy hungry for fresh opportunities.

Sticking with Tawa, Bill Tamani is an attacking fullback out of nearby Tawa College, while Silverstream halfback Luke Walmsley and St Pat’s Town openside Tom Walsh could also feature at Tawa.

As well as Higgins and Lakai (above), Petone have a group of school leavers joining the club to offset several losses from last year.

Ories have picked up several players from nearby schools, who could all be in line to play Premier rugby soon.

Tony Samuela is a first five-eighth who has arrived at Miramar from St Paul’s College in Auckland, who also played centre for their rugby league XIII.

OBU always have a core group of new players from around the country, who attend university and play Colts rugby. A couple of players to note this year are Jack Riley, a lock/loose forward out of the rugged and well performed Rangiora High School First XV in the Crusaders competition and Jayden Webb-Milner, an outside back out of Rathkeale College and a 2020 Hurricanes U18 player.

HOBM have a number of school leavers joining their ranks, alongside Jono Little (above).

Another new Eagle to look out for is Sapati Tagoai, lively right wing out St Pat’s Town and younger brother of leading Women’s player Monica.

MSP have a group of Sacred Heart College, Auckland players bolstering their Colts side.Some MSP Colts players from SHC and elsewhere include Inside back Zack Paterson from Hamilton Boys’ High School, flanker Samson Chandulal from Auckland Grammar School, hooker Charlie Hankins from SHC and outside back Eti Brown from St Pat’s Town.

Johnsonville have some young talent to watch, including Aaron Fawkes from nearby Newlands College, Knox Tuinasau from Paraparaumu College and Eben Claassens from Fishhoek High School in South Africa.

The Premier and Premier 2 competitions kick off this coming weekend, while the Colts have some grading rounds starting on Saturday.

Tom Martin: Work together, be yourself

Eagles and Magpies soar ahead in Swindale Shield