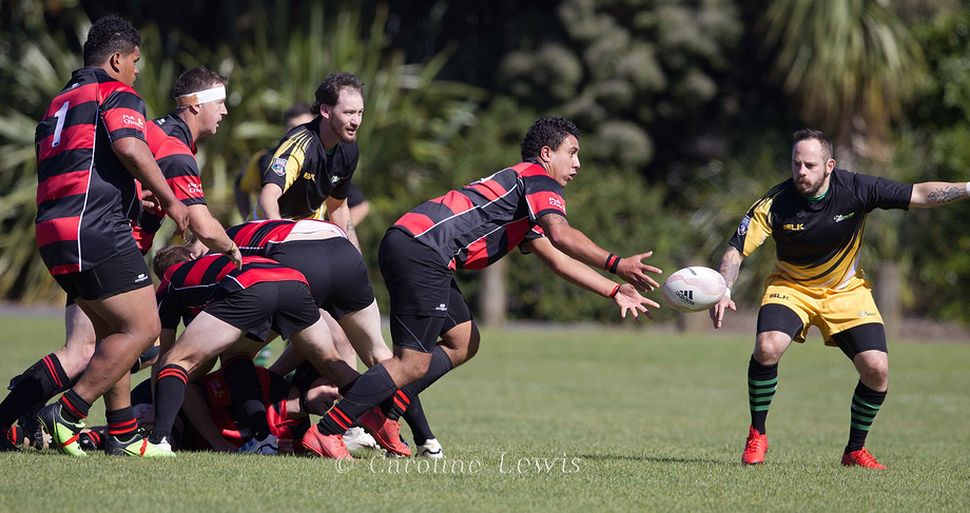 Action from the match between champions Southern and home team Central in their match at the National Deaf Championships. Southern beat Northern on Sunday in the decider.

Southern are the New Zealand Deaf Rugby National Championships for a ninth consecutive time following a resounding 41-13 victory over Northern at a wind-swept Petone Rec on Easter Sunday afternoon.

With Northern accounting for Central 38-13 on Friday and Southern winning a friendly against the same opposition, who failed to assemble enough numbers the next day, the final fixture of the three-way tourney was the decider.

Battling against a vicious northerly, Southern led 10-8 at halftime, and were firm favourites turning with the elements. Northern mounted a genuine challenge in the opening salvos of the second stanza, but eventually Southern superiority reigned.

In the opening quarter Southern produced a masterclass in negotiating a torrid wind. Reducing the length of their passes, hugging the short side touchlines with robust carries, and limiting error as much as possible, they thoroughly deserved their 10-0 lead.

Southern halfback Herbie Agnew drove his pack like a military sergeant. His tactual nous and distribution were excellent, but he was most potent when sniping himself. Fittingly he scored the first try of the contest, and had a hand to play in wing Isiah Albert’s finish in the left corner, the ball being shared between half a dozen players in a thrilling movement.

Northern rallied, opening their account about ten minutes before the interval. A series of rigorous phases resulted in lock Maurice Ratapu bullying his way over for a try. Northern fullback Greg Lessing was occasionally illusive, and had an educated right boot too. His 30-metre penalty goal cut the gap to 10-8.

Burly tighthead prop Arona Ale and Trojan No.8 Phillip King were possibly the pick of the Northern side. Both men were a hive of activity and spearheaded a sustained assault on the Southern line at the start of the second-spell. A failure to break through was telling.

Southern centre Jordie Kirona towered over his opposite and a try he scored pushing off multiple defenders from ten-metres out made it 15-8.

Prop Kenneth Tafia rumbled over shortly afterwards to make it 22-8 at which point the floodgates threatened to open.

Northern hooker Faaiu Palenapa briefly stemmed the tide with a bustling effort to make it 25-13, but Southern finished with a flourish.

No.8 Doug Braid applied the explanation mark on a sterling loose forward effort and second-five Henry Tangiwai-Scott produced the outstanding individual try of the match. Busting from halfway he then fooled the fullback with a dummy Ardie Savea would have been proud off.

The National tournament started in 1990 and Southern are the most frequent winners with 18 titles. They have won 35 of their 53 matches overall.

For an outsider looking in the most obvious differences between deaf rugby and able-bodied rugby is the relative silence. Players in this tournament were 50% deaf and used sign language to communicate. There are no contested scrums, otherwise deaf rugby can be as fast, brutal and skilful as the ‘normal’ game.

Arguably the most famous deaf player is England’s Ben Cohen. The 2003 World Cup winning winger is clinically deaf, with about 30 to 33 percent hearing loss in each ear. He’s been involved in efforts to make rugby more accessible to the hard of hearing, especially young deaf players.

Eremia Tapsell – helping to build success at the Axemen