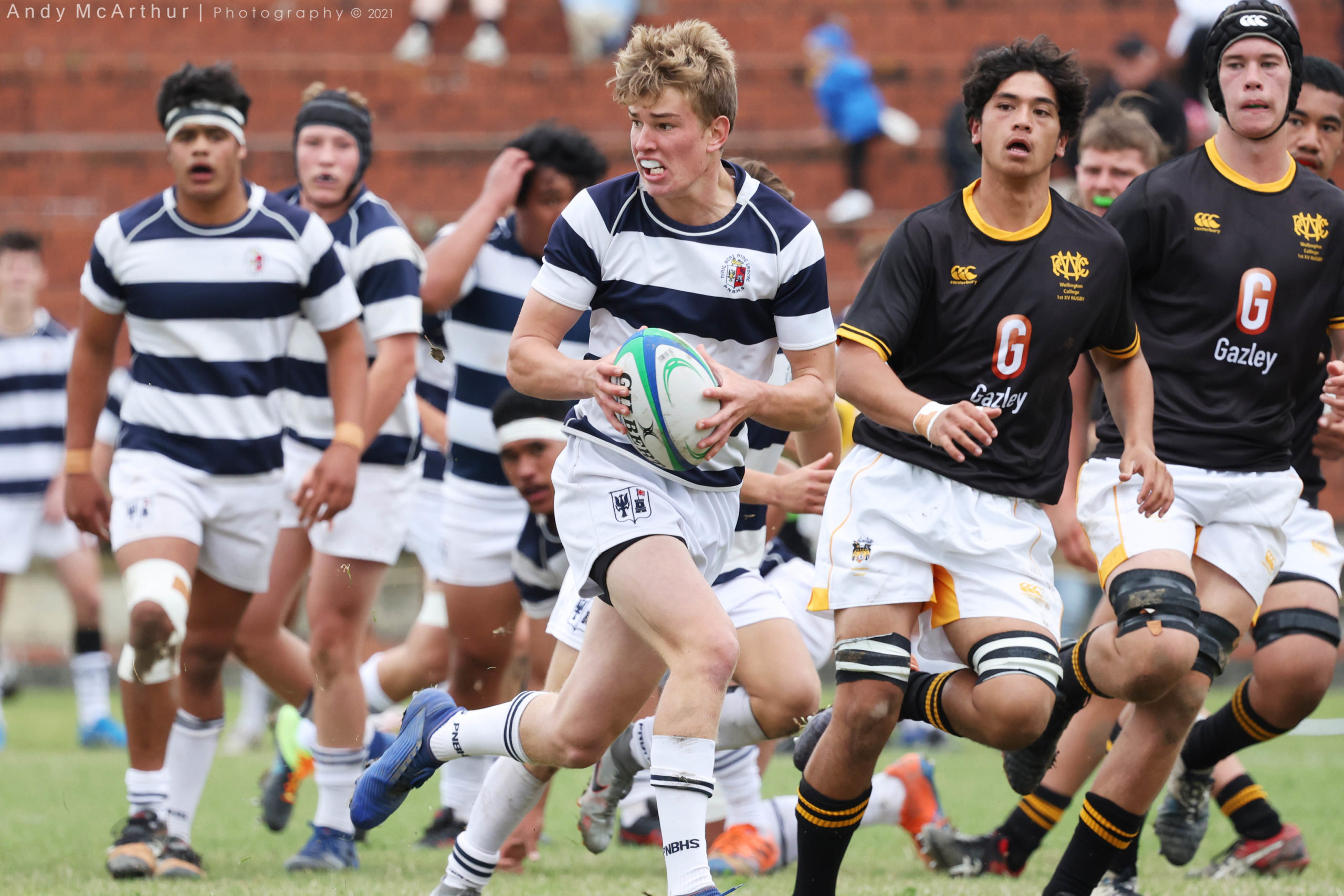 With 10 minutes remaining, and ahead 26-8, the Palmerston North Boys’ High School appeared to be in a comfortable position against Wellington College. However, a yellow card invited Wellington back into the contest. Two swift tries reduced the margin to half a dozen, and Palmerston North was forced to defend stoutly around halfway before earning a penalty which terminated proceedings.

Earlier it was the hosts that started assertively, camping inside the Palmerston North 22. However, it was out wide where Palmerston North first cracked it. First-five Sam Coles stepped off the right foot and opened a hole. Wing Tayne Harvey carried on the momentum before hooker Eli Odenryn (a mini James Parsons) barged over in the corner. The conversion was kicked and Palmerston North led 7-0.

Wellington was quick to respond when a turnover followed by swift handling from right to left resulted in wing Sam Meo dotting down.

Lock Cody Borlase was next to strike for Palmerston North, bustling through a tangle of bodies handy to the posts.

Wellington fullback Jacob Waikari-Jones kicked a penalty from 30-metres out to make it 14-8, the halftime score despite sustained pressure from Palmerston North.

With an extended squad of 25 players, and what appeared to be rolling substitutions, Palmerston North used their size to effectively wear down the Wellington defence. Attacking up the middle of the ruck was a weapon of great reliance and damage.

Fullback Anitoni Metui scored when Wellington was caught short on the blindside and Tadgh O’Conner swooped upon a loose pass and dashed 50-metres when Wellington rushed and fumbled a rare possession. With 25 minutes left it was 26-8 to Palmerston North.

In the past couple of seasons Wellington might have imploded in a similar position, but strangely the scrum stabilised and there is a lot to like about their backline.

First-five Stanley Solomon is only Year 12, but the son of former Black Fern Erin Rush distributes well and attacks the line confidently. He scored 35 points in the Under-15 final last year.

The midfield of Tofuka Paongo and Johnny Maiava provided plenty of bulk and the busy Paongo was rewarded with two late tries. Winger Joshua Williams is not short of size either and was handful when involved.

Wellington’s lineout was a major concern and Palmerston North locks Lawrence Leung-Wai and Borlase were standouts. Roll showed authority at times and Jakob Rauhihi-Collis was lively in a brief spell at halfback. The most resistance in the Wellington pack come from loosehead William Anderson (with the Jack Goodhue mullet) and openside Bailee Laurenson-Tupai.

Wellington College won the 2nd XV contest 20-17. Wellington trailed 12-10 at the break and then 17-15 with only a matter of moments remaining. Wing Alopoto Tuitama-Tiatia scored a cracking try, standing up his opposite and then swerving past the last defender to score close to the posts.

The Feilding Yellows side earned a bonus point victory over Old Boys Marist in their third round Manawatu Senior A competition match at Arena Manawatu.

Feilding’s win was a frustrating one, 42 minutes of the match being played with goldie oldies scrums owing to the injury departure late in the first half of OBM loosehead David Waru and no propping replacement on the pine.

This has been the case for the third week in a row, and the adjacent match on the other field suffered the same fate, with a first half red card to a College Old Boys prop (and several other cards of differing colours during the match) and subsequent injuries to other players making their match go to uncontested scrums for much of the game. College Old Boys won the game 32-17.

For the first 25 minutes, the match between Feilding and OBM was generally well contested. Feilding had a clear edge up front – which they hoped to exploit why they could – while OBM had a good set of backs and looked threatening at times.

Finally, with half an hour up, Feilding managed to score their first try, to fullback Andre Hoggard in the corner. This was quickly followed by another to bustling No. 8 Sam Wasley who burst through a ruck at close range and flyhalf Drew Wild added the extras for a 12-0 lead.

With momentum, Feilding should have used their scrum to score again, but made an error and conceded the turnover. Shortly after, Waru departed injured and scrums were depowered.

Just before halftime, OBM went close to scoring but Feilding scrambled and went to the oranges.

The Yellows made a dream start to the first half, scoring almost immediately from a rolling maul off a lineout and going 17-0 up.

Attacking towards their clubrooms and now with showery rain falling, OBM rallied and went desperately close to scoring in the opposite corner.

Feilding halfback Griffin Culver was sin-binned and hooker and their best player on the day Bryn Gordon soon burst through to score to close the gap to 17-7.

The game wasn’t safe as Wild kicked a penalty to push the lead out to 20-7. Once more, OBM came back but couldn’t break through on a now slippery surface and good Feilding defence.

Feilding used the cross-wind to good effect all match, playing the territory game and using their lineout as a point of attack. This paid off again with several minutes to go as they scored a second try from a lineout and maul. Their bonus point try made the game safe, but they won’t be altogether satisfied with their afternoon’s work.