Skip to content
You are here
Home > Club Rugby > Bond Banter 29 March (News in briefs, rugby information from the ground up) 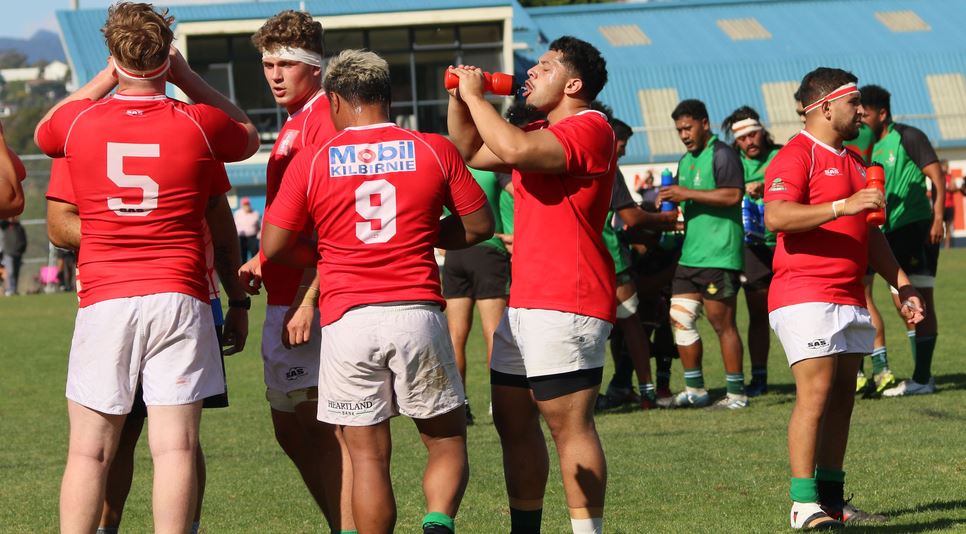 A hot day for pre-season rugby on Saturday. The MSP and Nelson Marist packs take a break in the heat of the match. With some rain, cooler temperatures and the end of daylight savings coming up conditions will become more conducive to rugby as we know it.

A rugby inferno is brewing.

There is one weekend to go before the start of the 2021 club rugby season in Wellington, and clubs are ramping up their preparations this week and over the coming four-day weekend for their assault on the first round title.

Pre-season rugby is light this coming weekend, with most clubs holding internal summits.

Rugby at a glance – that we are aware of (subject to change) is:

The MSP Colts and the St Pat’s Town First XV met for the inaugural Xavier Reidy Cup, marking the recent passing of the St Pat’s Town student. His parents, including father Brendan who is a former coach and player of MSP and St Pat’s Town. He presented the trophy to the school side, after they won 26-22 with fullback Francis Mettrick scoring the winning try at the very end.

The MSP Premier Reserves and MSP Premier squads mixed up their squads in winning the next two matches.

Johnsonville won the Pearce Cup cricket title for the first time ever and their first title since the 1982-83 season when it was just the Wellington city clubs competing. So can the Johnsonville rugby side take inspiration and bring home the Jubilee Cup this year?

The defending champions OBU Green Colts beat the Petone Colts 17-10 in their pre-season match at North Park. The game was called off after 60 minutes owing to an injury.

Petone won both the Premier and Premier Reserve matches that followed on North Park.

Reports of the Stokes Valley Rhinos beating the Paremata-Plimmerton Premiers on Saturday in their match at Naenae Park.

In the Manawatu, Feilding Yellows, Massey and College Old Boys are the three unbeaten teams on 10 competition points after two rounds. On Saturday, the Yellows beat Te Kawau 71-0, Massey defeated Freyberg 41-17 and COB overcame Kia Toa 40-19. The fourth fixture of the day was the closest, with Old Boys Marist pipping FOBO 36-35.

Round three is this Thursday night (one match) and Friday afternoon (three games).

From the Auckland Premier club rugby desk. Grammar Tec and Ponsonby are setting the early pace with the two clubs set to meet in the pre-season Waka Nathan Challenge Cup final this coming Saturday. Ponsonby beat College Rifles 27-24 in their semi-final while Grammar Tec battled past Eden 26-14. The Grammar Tec match was played at Cornwall Park in a tricky and stiff breeze which neither side adapted to. Eden tried to attack the short-side frequently in the first-half, but lacked imagination with the ball in hand and found themselves three tries to one down at halftime. One of those tries was a length of the field intercept by former Wellington-based wing Jack Gray. Eden enjoyed up to two-thirds of possession and weren’t lacking in heart or scrummaging power, but Grammar Tec was slightly more polished in a deserved victory. Their goal-kicking halfback looked like a tidy player despite the mostly scrappy ruck contest.

Did the Hurricanes win because the referee looked like Luke Campbell?

Jordie Barrett equalled the record for the most points in a single game for the Hurricanes on Friday when she scored 30 points against the Highlanders in Napier. Ironically David Howell achieved the same feat against the Highlanders in 2001 when he scored a try and kicked two conversions and seven penalties in a 35-33 win. Barrett scored all of his sides’ points in the 30-19 win.

Nobody has scored more points by the whole team and won than Jordie Barrett did on Friday night. In 2009 though Morne Steyn scored all 31 points in a win by the Springboks against the All Blacks.

Most points in a match by a Hurricanes player (thank you Peter Marriott for this information):

The Premier Reserve grade in Wellington has been rebranded Premier 2.

The grade is to be split into two divisions based on 2020 final standings, with promotion/relegation after the first round – one team promoted, and one team relegated

The Premier 2 competition will begin on Saturday 10 April and where possible, draws will be structured to provide the Premier 2 team as a curtain raiser for the Premier team.

A draw will be finalised, distributed to clubs and published on our social media channels by Monday 5 April.

There are still opportunities for players overseas in the Covid-rugby world.

Look no further than former St Pat’s Silverstream first five-eighth Harrison Boyle, who left school at the end of 2017 for Dunedin and made the Otago NPC squad last year, before being lured to Boston (the place of his birth) to play for the New England Free Jacks in the Major League Rugby competition. The team is also coached by Ryan Martin, who presumably is the same coach of Dunedin and Otago rugby fame.

Watch all Major League Rugby games for free at https://www.therugbynetwork.com/

Duhan Van de Merwe scored two tries in Scotland’s dramatic 27-23 win against France to conclude the Six Nations. The South African born winger is a possible British and Irish Lions pick following his startling form less than a year after his debut for Scotland. From George in the Eastern Cape of South Africa, he played for the Junior Springboks in the 2014 World Under-20 championships in Auckland. They beat hosts New Zealand twice in that tourney, but lost the final 21-20 to England at Eden Park. Maro Itoje was England’s captain. Things got even better for Van de Merwe in 2016 when he played in the Varsity Cup, South Africa’s top University competition. In the final round robin fixture of that series he scored six tries and 48 points in a 100-25 victory against the UCT Ikey Tigers. In 2016 he was recruited to Montpellier by 2007 World Cup winning Springbok coach Jake White, but it didn’t work out. In 2017 he signed with Edinburgh. In October 2020, after serving the three-year residency period required to play international, he scored a try in his international debut against Georgia. Van de Merwe had. In the Six Nations he scored the winning try against England, dotted down twice against Italy and nabbed another against Wales before his heroic display in Paris. Standing 6ft4 and 106kg, Van Der Merwe is more than a handful.

Prior to Saturday the last time Scotland had beaten France in Paris was in 1999 when they won 36-22 in what was then the Fix Nations. Centre Alan Tait and flanker Martin Leslie, now living in Petone, scored two tries each.

Terrific for the players involved, but appalling timing by NZR for the upcoming inaugural U20s tournament in Taupo that runs from 11-17 April. The tournament us being run along Super Rugby franchise lines, plus a ‘Barbarians’ team to make up an even number of teams. So this means up to 150 players are going to be pulled from club rugby competitions around the country for this for two Saturdays (maybe more). So, in Wellington, Hawke’s Bay and Manawatu, that’s a dozen or more of the best young players not playing in the Swindale Shield, Nash Cup and Hankins Shield for a fortnight in April

No Jock Hobbs Memorial National U19 tournament this year, so why not have either played this earlier in March or in August?

The draw is (all games live on Sky TV, of course it is):

In Women’s Super Rugby news, the Chiefs Women and the Blues Women will meet on 1 May.

Sir Graham Henry says provincial rugby unions must ditch their conservative attitudes if they are to stop youngsters leaving the game.

Henry, who coached the All Blacks to a World Cup title in 2011, says that while the professional part of the game is in good nick, the sport’s leaders have to be more innovative when trying to retain the players who are in the amateur tier.

“I would like to think all the provinces have a good think-tank about what is best for their area, to get kids playing the game; whether it is Rippa Rugby, 7s, 10s or the under-85kg grade,’’ Henry said.

This figure is up from 19 last year, when the tournament was only offered to the 5 provincial unions that had an existing weight-grade tournament.

Some highlights from each day this coming week in Wellington club rugby history:

29 March 2003: Old Boys University earn a come-from-behind 11-8 victory over defending champions Marist St Pat’s in a replay of last year’s Jubilee Cup final. With locks Bernie Upton and Matt Egan leading the way, MSP take an 8-0 lead. OBU hit back with a try off a MSP error and then kicke two penalties late in the match. Elsewhere, first five-eighth Corey Burt kicks six penalties and sideline conversion in Johnsonville’s 25-23 win over Petone and young fullback Cory Jane is Player of the Match in Upper Hutt’s 28-20 victory over HOBM.

30 March 2019: Livewire Northern United first five-eighth Esi Komaisavai intercepts a pass in general play and sprints 60 metres to score the match-winning try to see his side retain the Ken Douglas Trophy with a 30-25 victory over Old Boys University in a replay of the previous August’s Jubilee Cup final. In a tight seesaw match, OBU had taken a 15-10 lead into halftime, weathering waves of Norths possession and territory at the other end to counterattack and score two forwards tries from their only two clear chances of the half. Norths break open the game immediately after halftime with a turnover from a lineout on halfway and a runaway try, but OBU hit back once more when second five-eighth Izzy Foai joins his forwards at close-quarters and dives over to keep the game on tenterhooks.

31 March 2007: Poneke pip MSP 18-17 in the battle of Kilbirnie first up this season. MSP take the early ascendancy and race to a 14-3 lead. Poneke close the gap and after halftime hooker Dane Coles links with fullback Tevita Latu in for a key try. No. 8 Chris Brightwell scores the winner with five minutes to play.

2 April 1983: The Poneke FC’s 100th anniversary celebrations are marred slightly when their top team loses 7-9 to Wainuiomata in their Swindale Shield opener. Elsewhere, Western Suburbs, an off-season amalgamation of Athletic, Onslow and Karori, draw their first ever match 15-15 with Upper Hutt.

4 April 2009: In two significant results in second round matches today, Petone defeat Norths 30-25 at the Petone Rec to hand Norths its second straight loss of 2009, and Poneke beat defending co-champions Marist St. Pat’s 18-8 at Evans Bay Park to inflict the first defeat of MSP on their home patch for almost two years and also claim the inaugural Miller-Horan Trophy between these sides.

Short Passes 10 February (a bumper edition to start the year)