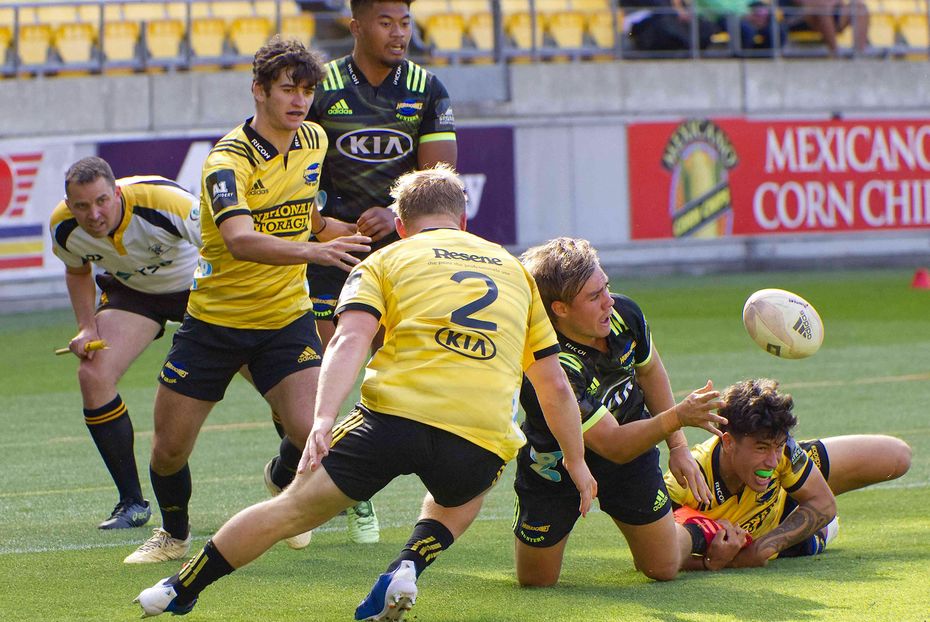 Above: A lot going on this photo on Saturday. Aidan Morgan is getting a pass away, presumably to a teammate for another try in the Hurricanes Hunters’ 64-19 win over the Hurricanes U20s. PHOTO: Mike Lewis Pictures.

UPDATED: The phoney war in Wellington club rugby continues for another two weekends, ahead of the start of the season-proper on 10 April.

There was several matches played around the region, with several more this coming weekend. At this stage the games, including a Women’s pre-season day, are:

This schedule can be changed and added to as we know what else is happening. There were some changes this past weekend to the pre-season schedule as promoted as late as Thursday.

The Hurricanes also play on Friday night, against the Highlanders in Dunedin.

As noted above, the MSP Colts and the St Pat’s Town First XV will be playing for the inaugural Xavier Reidy Cup this coming Saturday, after the recent SPC student and son of former player and coach Brendan Reidy’s tragic passing late last year.

The Hurricanes got run down and lost 29-35 to the Chiefs on Saturday (some more about that game below), while in the curtain-raiser, the Hurricanes Hunters Development team beat the Hurricanes U20s 64-19 (halftime 45-0). As is usual now, there is zero news and information about this game, other than a pretty social media picture telling us the score, so who knows who scored what, who played well, what happened other than the score?

The opening round of the Manawatu club rugby competition on Saturday was played in fine, breezy conditions at Arena Manawatu. Four matches were played on adjacent fields with the predicted favoured teams all winning well.

Three of the four games followed a similar pattern, with the winning side skipping out to big early leads.

Two-time defending champions Feilding Yellows cantered to a 29-0 halftime lead over Freyberg, but Freyberg fought back after halftime and pacey left wing Varcon King ran away for a brace of tries. The Yellows won 34-10, but coach Nathan Williams was left with plenty for his team to work on at training this week. Feilding fullback Brad Carr scored two first half tries in his 350th Senior A match.

The other early game between Te Kawau and Kia Toa was hotly contested in the first half. Te Kawau won 43-17, but could only manage two penalties in the first 25 minutes. They scored twice before halftime and led 21-3 at the interval. Te Kawau scored again soon after halftime as Kia Toa struggled for cohesion and failed to make inroads.

The two late games also saw the vanquished team chasing the game early. College Old Boys scored a bunch of tries early, capitalising on porous midfield defence, to extinguish Feilding Old Boys Oroua’s hopes, but the latter came back into the game and competed for long periods in the second half. Another late burst gave COB a 55-17 win.

Varsity fullback Reece Robertson continued his try-scoring form from the previous week against Old Boys University by scoring a bombastic try under the posts inside the opening couple of minutes against Old Boys Marist. Varisty were sharp last week against the Wellington champions and would go on to lead 20-0 by halftime and then 35-0 after a tighter second half that also saw no fewer than three yellow cards doled out. OBM scored two late consolation tries and the final score was 35-14 to the students.

Richie Mo’unga scored 28 points for the Crusaders in their win against the Blues on Sunday. The most points by any player against the Blues is 38 by Sharks first-five Robert du Preez in a 63-40 win at Eden Park in 2018.

The most points by a Crusaders player in a match is 31 by Tom Taylor v Stormers in 2012.

A strong letter from Christchurch concerning an incident in the Crusaders 43-27 victory over the Blues.

Some seriously revolting stuff in the after match. Interviewing Kurt Eklund was Izzy Dagg and Kirsty – the three of them having a laugh about how he could become a wrestler and Sevu Reece an actor. It was a retaliatory wrestling flip long after the whistle where Reece went upside down and came down on his head and neck. Ofa Tuungafasi should have been red-carded for his shoulder on the chin of Scott Barrett.

Does anyone know the forward pass rule anymore?

This coming weekend Whakatane Marist is hosting a Whakaari/White Island fund-raising afternoon of rugby.
Whakatane Marist hosts Opotiki in the first match of the day, followed by a match between Zesperi and the New Zealand Parliamentary team:

The Sky Sport rugby show came to Wainuiomata RFC last week – here the hosts discuss club rugby after a question from the floor:

At some point soon, NZR are going to have to make that decision of whether they want strong club rugby competitions or one continually undermined by the pull of high performance rugby. When professional rugby first started, it was essentially just the top guys taken out to play for the Hurricanes etc, affecting some clubs more than others (think Petone in 1996). Now, its the tier below these players and the young guys who are pulled from club rugby competitions on a regular basis and this is now the new normal. It was estimated an entire team of 15 players missed the opening round of Manawatu club rugby on Saturday as they were playing in the Hurricanes Hunters v Hurricanes U20 game in Wellington. Plus at least one other player prevented from playing late in the week by the MRU. That player had trained with his team all week and was the waterboy. Then there’s the ‘Chiefs Centurion Cup’, which from the outside looking in, appears to be a pre-NPC competition.

Meanwhile, the Wainuiomata Colts ran out in front of the same clubrooms a few days later, returning to the competition this year:

Taita v Johnsonville in this coming weekend’s Wellington club cricket final. Wouldn’t it be great for those clubs and the competition if we got an Avalon v Johnsonville Jubilee Cup final!

Rugby could learn a lot from speedway. The New Zealand Midget car championships at Western Springs was full of mayhem in Auckland on Saturday night, and the best thing about it is how close to the action you are. Be prepared to be hit occasionally from dust and dirt, but the sight and sound of cars screaming around the track at over 200km an hour is a thrilling one. Being close to the players in professional rugby, you can hear the hits, trouble is your treated like battery hens and kept far away and furthermore restricted to a small section of the field after the game in some places like Wellington.

Kiwi-born Bundee Aki was sent off the second time in his test career when Ireland beat England 32-18 in the Six Nations. The midfielder in his 30th test match was dismissed in the 64th minute for striking England No 8 Billy Vunipola. Ireland was leading 29-11 at the time. Ireland have now suffered six red cards in tests and Aki joins three other players to have been sent off twice in their international careers. Uruguay’s Mario Cagnani, Samoa’s Alesana Tuilagi and the United States’ Paul Emerick are those individuals. Earlier in the championship Irish flanker Peter O’Mahony was red-carded against Wales. Dispute being down a man Ireland scored 13 unanswered points after he was dismissed to almost topple Wales. Daniel Carter scored his first test try in jersey 26 against Wales in Hamilton in 2003. The All Blacks won 55-3.

An eerily bizarre premonition happened at halftime on TV during the Six Nations match between Wales and France. Highlights were shown of a 2003 Super Rugby fixture between the Blues and Chiefs in Hamilton, won 30-27 by the Blues. Blues lock Troy Flavell was red-carded for stomping on the head of Chiefs hooker Greg Smith, yet his side, wearing blue attire, won the game following two spectacular tries to Rupeni Caucaunibuca. In the Wales v France tes,t French lock Paul Willemse was sent off for making contact with the eye area of the Welsh prop Wyn Jones. Down by 10 points, France rallied to win 32-30 when fullback Brice Dulin, previously denied a 67th-minute try after the incident, crossed after the fulltime siren with France fielding 14 players compared to Wales’ 13.

Two teenagers were waiting for a ride home after rugby practice at Bishop Viard College in Porirua when one of them spotted a suspicious-looking man.

Oliver and Robert’s otherwise normal February evening soon took a dramatic turn when they helped police arrest the man who fleeing after a stolen car crashed.

Yesterday they received an Area Commander’s Certificate of Appreciation at a full school assembly for their courageous intervention.

Meanwhile, there could be a travel bubble announced between New Zealand and Australia in a matter of days. This would mean that the Super 5 competition would morph into the Trans-Tasman competition and be ready to go inside the next month or so.

We are always adding photo galleries.  Our photos are usually put on Facebook as well (but not always) and a 10-photo gallery put on Instagram (but not always). So bookmark and visit https://clubrugby.smugmug.com/2021 All our photographers are volunteers, so it helps please to credit them when re-posting on other channels.

Bond Banter is our news in briefs, informational, statistics and general rugby news column to start each new week in rugby. To contribute or if you want anything promoted here please email editor@clubrugby.co.nz or message us on social media.

Some players to watch in club rugby this year