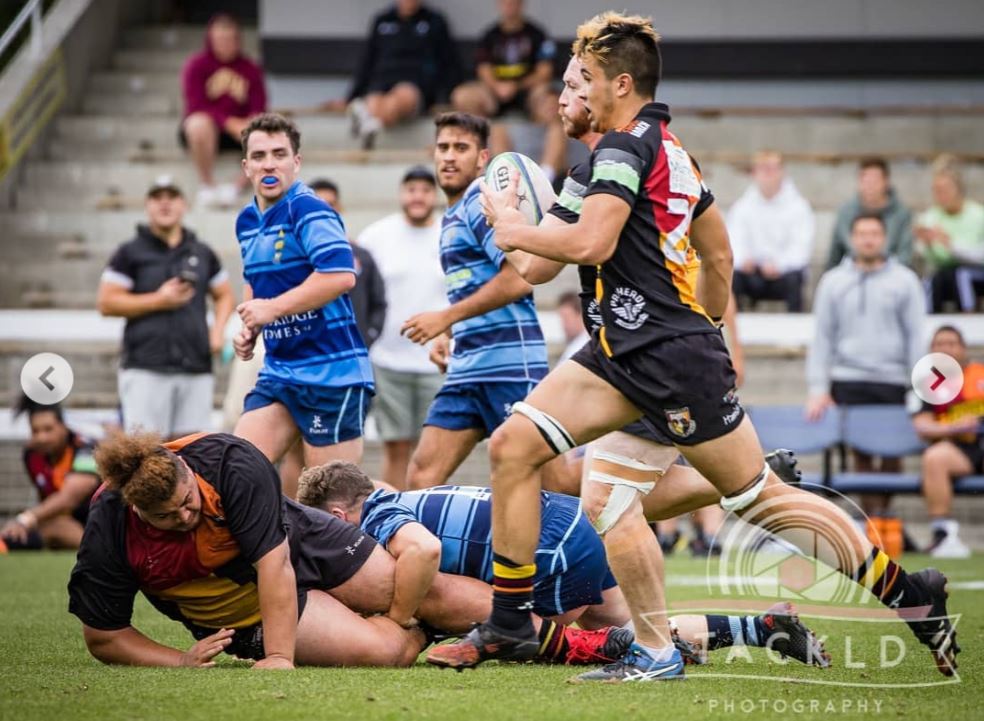 The Upper Hutt Rams hosted Johnsonville and Feilding Yellows in a game of three halves on their Open Day at Maidstone Park on Saturday. All three clubs will step up their pre-season preperations this coming weekend. PHOTO: Tackld.

The first week of pre-season 15s down, one to go before match-week for the opening round if you are in the Manawatu (20 March start), three if you are in Hawke’s Bay (2 April start) and four in Wellington (10 April start).

A glance at this coming weekend’s rugby:

Pre-season schedule as received and subject to change – please let us know so we can update and add content to stay accurate.

The Crusaders ended their 225-day losing streak against the Hurricanes in Christchurch with a 33-16 home victory on Sunday. The visitors won the corresponding fixture 34-32 on July 25 to snap the Crusaders’ 36-game winning streak at Orangetheory Stadium

Ardie Savea really is a talisman. The ball bounces the other way and the Hurricanes score a try making it at least 11-0. A very different game from that point.

Typical Crusaders. Under the pump, mitigate the worst outcome, score a boring try and win.

Captain’s referral: Can Savea declare an hour early like they do in cricket? Did Whitelock ask for a referral of the Blues salary cap for next year?

The Hurricanes won the first 20 minutes, and the second-half, a third of the way there.

The Crusaders have won 45 of their last 48 games at home.

The Hurricanes won five games in a row after two losses to start the 2020 version of Super Rugby Aotearoa. They have their bye this coming weekend. The Chiefs at home the following weekend.

It’s perhaps little surprise to those in the know Jona Nareki produced a spell-binding performance in the Highlanders 39-23 win over the Chiefs in Hamilton on Friday night. The flying Fijian was a member of the 2017 world champion winning New Zealand U20 team and a key player in the Otago Ranfurly Shield tenure of 2019-20 – scoring eight tries in eight matches despite suffering a scrotum split after a knee to the nether regions from Waikato opponent and “good friend” Quinn Tupaea in the first game of that reign. Additionally, he’s been a New Zealand Sevens rep and won an abridged World Rugby Sevens Series title last year. In 2015 he was a member of the Feilding High School First XV and scored two spectacular tries in a 25-15 win over Palmerston North Boys’ High School in a groundbreaking schoolboy fixture. Curiously it’s the last time the local Manawatu rivals have played. In a petty feud that’s endured a decade at least the first fifteens refuse to play each other, despite often meeting in Sevens. In 2015 they were forced to play each other in an eight-team Hurricanes First XV series after Scots College withdrew to tour Japan and Feilding replaced Scots to even the numbers and the draw placed the two combatants on a collision course. The fixture was played at Napier Boys’ High School and Palmerston North refused to wear their traditional white jerseys.

Consolation for Chiefs fans. The Highlanders won from 31-7 down in the same game last year.

There are any number of statistics employed to measure performance but one of the most misleading would be metres run. Running a lot of metres can obviously be helpful, but shouldn’t metres after contact be measured? A fullback who runs the ball 20-metres without being touched and then gets isolated and turns the ball over in his own territory has done nothing helpful. A tough run among crowded defence, resulting in five metres and quick ball to attack is more effective.

New team leaders for 2021 for Johnsonville:

The state of the game at secondary school levels remains a concern with overall participation numbers having fallen for the sixth consecutive year and ninth in the past decade with just over 24,000 registered players in 2020 compared to over 31,000 in 2011. Locally numbers remained steady last year despite the Covid disruption with 2030 boys and 420 girls, but those boys numbers are still 600 short of a decade ago.

However rugby is far from alone, with the other traditional sports like football and cricket also shedding numbers on the face of competition from the likes of basketball, volleyball, and futsal.

Happy 21st birthday to Jack Gray. The son of former Maori All Black, publican, and MSP stalwart Wayne Gray is now based in Auckland where he has won two colts titles with Grammar Tech and cracked the Auckland Under 19 squad. The former Scots College old boy scored a try in the 2015 National Top Four final having come from Hutt Valley High School.

Good to see Ridge Studd (third from left) back amongst his Petone flock this weekend, in Palmerston North with the Petone Colts. Not playing, but there in support.

A poor decision to cancel the McEvedy Shield athletics competition involving St Patrick’s College, Silverstream, St Patrick’s College, Wellington, Wellington College and Rongotai College last week. Named after rugby international Pat McEvedy, the McEvedy Shield has been staged annually since 1922 and only once, in 1948, was it cancelled. Curiously two other zonal meets will proceed over the next week and then the Regionals at the end of the month, so why not McEvedy even if spectators can’t go? Are the headmasters trying to save face or avoid hassle following the odd incident of mis-behaviour from a very small minority recently. A real pity for the athletes and coaches, many of whom have been training since November last year.

Then there was the news out last week that the Women’s World Cup scheduled for New Zealand later this year has been cut:

World Rugby has made the difficult decision to recommend the postponement of Rugby World Cup 2021, scheduled to be hosted in New Zealand between 18 September-16 October, until next year. The recommendation will be considered by the Rugby World Cup Board and World Rugby Executive Committee on 8 and 9 March respectively.

While appreciating the recommendation is extremely disappointing for teams and fans, it has their interests at heart, and gives the tournament the best opportunity to be all it can be for them, all New Zealanders and the global rugby family.

The recommendation is based on the evolution of the uncertain and challenging global COVID-19 landscape. It has become clear in recent discussions with key partners including New Zealand Rugby, the New Zealand Government and participating unions, that, given the scale of the event and the COVID-19-related uncertainties, it is just not possible to deliver the environment for all teams to be the best that they can be on the sport’s greatest stage.

The Hawke’s Bay Rugby Football Union board has gained its second female director with the election of former Black Fern and Tui star Emma Jensen.

The Hastings Girls’ High School deputy principal was voted in at the Union’s annual general meeting on Tuesday with two-term director Mark Hamilton stepping down from the board.

Jensen, 43, played 49 tests for New Zealand and participated in four World Cups during her 20-year first-class career and was also a key Tui member last season.

All Blacks, Highlanders and Manawatū Turbos fans will be celebrating, with halfback Aaron Smith announcing that he has signed a new contract with New Zealand Rugby (NZR), his Highlanders club and Manawatū provincial union that will see him stay in New Zealand through until 2023.

32-year-old Smith played his 151st game for the Highlanders on the weekend and is the most capped All Black halfback of all time (97 Tests). He made his provincial debut for Manawatū in 2008, Super Rugby debut in 2011 and Test debut a year later, has been the first-choice halfback for the Highlanders and All Blacks since then, and remains at the top of his game.

“I guess I have to adapt and work a little harder than I did back in 2011, but one thing that hasn’t changed is my love for the Highlanders, the All Blacks and Manawatū,” Smith said.

“The decision to stay is based on a number of things, but I’m very keen to see the Highlanders do well, we have a good environment here and some great, young players, so I think the next few years will be exciting for us and it’ll be great to be part of it,” said Smith.

Smith said he was also looking forward to what the future held for the All Blacks: “Last year was a tough one for sport, but hopefully we’ll soon see the world rugby calendar start to take shape and there’ll be plenty of exciting, new challenges to look forward to.”

Smith said his commitment to the Highlanders also reflected his affinity with the team’s home base.

“Dunedin has been good to me. My wife Teagan and I have a home and a business here and our son Luka was born here. I felt that committing to the Highlanders for another few years in some small way says thanks for all the support we have enjoyed over the years.”

This week in club rugby history: 6-12 May