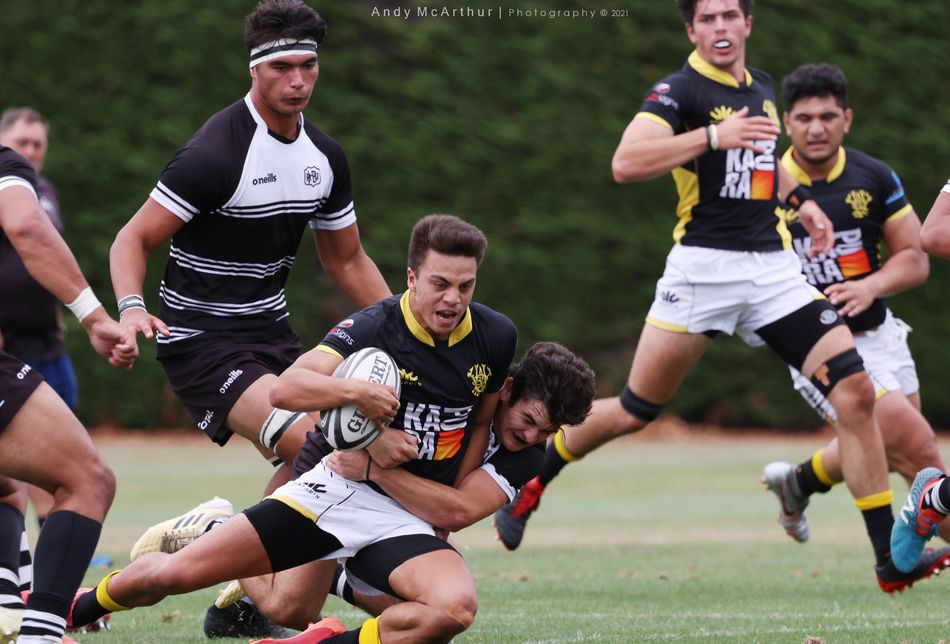 The Hawke’s Bay Academy squad defeated its Wellington Academy counterpart in the third and final match of the Hurricanes region inter-Academy series at Massey University on Saturday.

In cloudy, blustery conditions, the Junior Magpies had first use of the wind and breezed to an early 12-0 lead.

Their first attacking foray of the match, from halfway up into Wellington’s 22, was a fruitful one. From a scrum penalty under Wellington’s posts, halfback Ezekiel Stewart took a quick tap and second five-eighth Jordan Thompson Dunn punched at the line. A series of pick and drives followed and lock and captain Tiaki Fabish dived over for the first try.

Their second try started from a lineout 35 metres out and after a number of phases back up into Wellington’s 22, Wellington again gave away a penalty at a ruck and on penalty advantage Hawke’s Bay swung the ball wide to right wing Kere Penitito who waltzed in unattended.

Wellington’s forwards grew into the game, captain and lock Hugo Plummer and tighthead prop Luke Chisholm both prominent, and Wellington came up with two tries of their own before halftime.

Both these tries were started from attacking scrums inside Hawke’s Bay territory, the first seeing second five-eighth Riley Higgins beating three players and scoring a well taken try, and the second after blindside flanker Rory Woods peeled away from traffic and linked up with halfback George Sims and try-scorer Keisar Valilolo on the right wing.

Wellington’s second try made it 12-12 and the talk in the Hawke’s Bay huddle was snaffling the kick-off and scoring once more before halftime.

They did exactly this, Wellington making a meal of the kick-off and Hawke’s Bay regaining possession and feeding the speed of Joeli Suka on the left wing who crossed in the corner. First five-eighth Harry Godfrey calmly slotted the sideline conversion and they went into the break leading 19-12.

Carrying large benches, both sides made several changes at halftime or early in the second half, plus Wellington had already re-shuffled its backline in the first half when centre Reon Paul had departed injured.

Now with the wind, Wellington had much of the momentum of the second half, but failed to break through over the best part of 30 minutes. Their two best opportunities were undone by lineout errors on their own throw. They gave away several more penalties at various intervals that undid any good work, while Hawke’s Bay’s defence was strong.

With about 15 minutes to play, Hawke’s Bay made Wellington pay by kicking for touch in good position off a penalty, setting up play from the lineout, winning another penalty and second five Thompson Dunn taking a quick tap and linking up with loose forwards Lexus Greening and Tupou Ma’afu Afungia and setting up a try for Bethal Malaysia on the wing.

Wellington had to score next but struggled to get out of their own half. With time almost up, Hawke’s Bay received the ball from a turnover and lock Fabish galloped through a hole and tried it on with a chip and chase. This was regathered by a teammate and spun left to Malaysia who scored his second try and final score of the afternoon.

A Hurricanes U20 team will be selected soon to prepare for the inaugural Super Rugby U20 tournament in Taupo in mid-April.