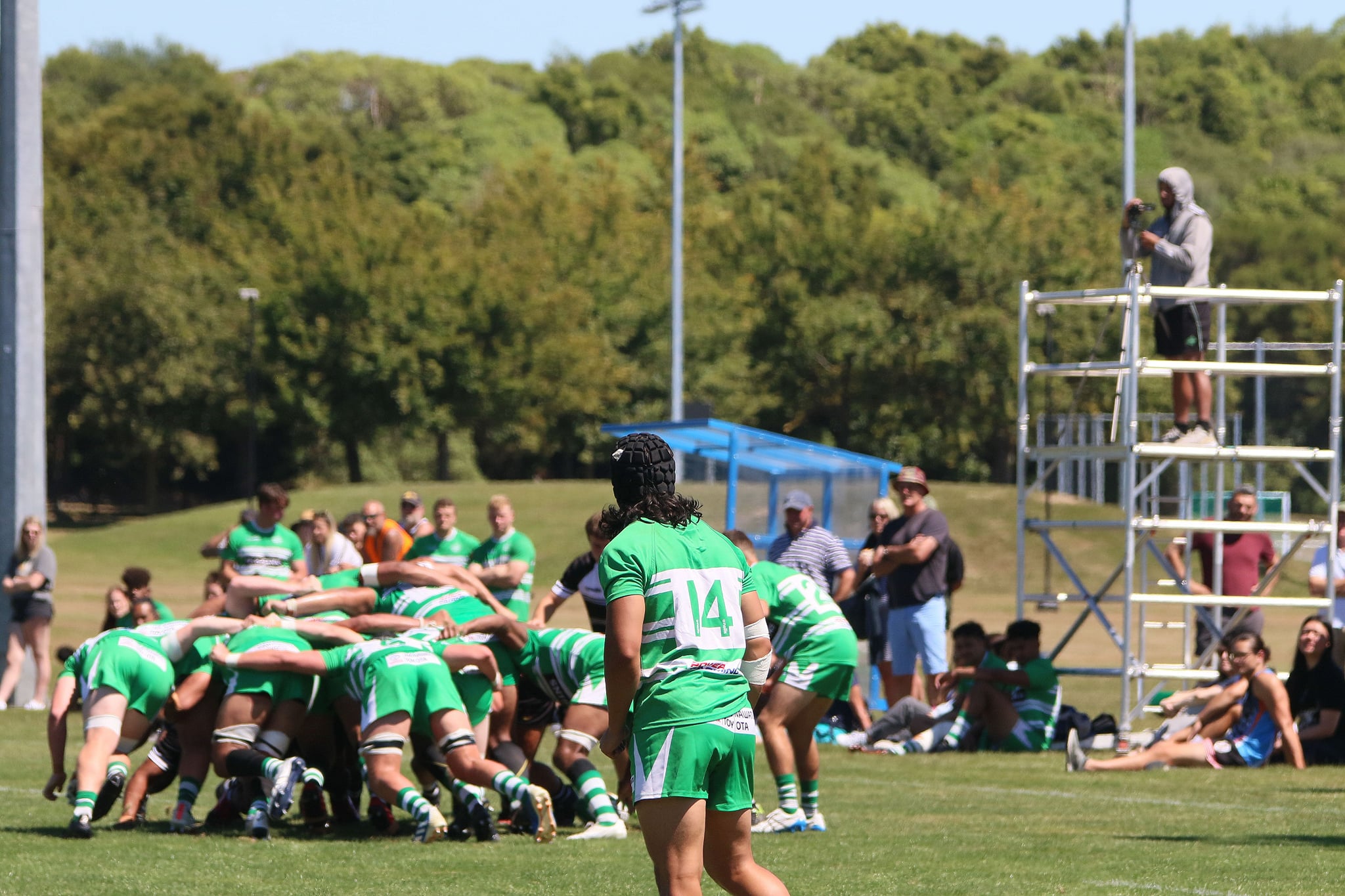 Bond Banter, also known as Short Passes, is our ‘early in the week’ news in briefs, tidbits, observations and anecdotes, statistics and an overall look at what’s coming up article.

Heading towards the end of February and summer is still sizzling, but the rugby will be soon as well.

The long-awaited new season stirs into life in Wellington this coming Saturday, with a double-header at Porirua Park. In the first game at Jerry Collins Stadium, Wellington hosts Manawatu in the second round of the new Hurricanes inter-Academy series at 12.30pm. This is followed by the Hurricanes Hunters (Development team) playing a Regional XV at 2.15pm. Elsewhere, the Hurricanes host the Blues at Wellington Stadium in the opening Super Rugby fixture of the year.

Up the line, the Shannon 7s is being played at the Shannon Domain. At the time of publication (Monday morning) there is one place open:

The opening Hurricanes Academy fixture on Saturday at Massey University between Manawatu and Hawke’s Bay resulted in a 26-26 draw and was a lively spectacle, as well as a solid hit-out for the players.

Hawke’s Bay started with a hiss and a roar, scoring after five minutes, but Manawatu’s pack asserted themselves and dominated much of the next two quarters. Manawatu went on to lead 19-12 just before halftime, when they scored an intercept try that extended their lead to 26-12. In the hot sun, both sides made numerous changes as Hawke’s Bay came back into the game. Their backs were more threatening and they closed to 26-19 with a try just before three-quarter time. They had the ascendancy when their centre George Stratton went down injured and the game was moved to the adjacent field. Eventually they scored a match-equalising try through Cooper Flanders from a 5m scrum.

For the home team, a standout player that Club Rugby had yet to see play was captain and flanker TK Howden out of Feilding. Another was lock Semi Vodsese. For the visitors that player was first five-eighth Harry Godfrey, who’s running and distribution game was impressive. Godfrey is out of Whanganui Collegiate and made the ‘paper’ NZ Schools team last year. Another player who impressed, who we have seen play before in Wellington club rugby, was Old Boys University No. 8 Tiaki Fabish, who packed down for the Magpies side.

The Highlanders came home like a bullet train to easily beat the Hurricanes in Alexandra on Friday night.

The side stepped on the gas in the second half and ran into some gaps in the defence to score four converted tries.

The team used the ball better in the second half as the Hurricanes defence wilted in the stifling Alexandra heat.

Who is the Hurricanes best halfback and why?

Which halfback is most capable of playing first-five and stepping into position like TJ Perenara did last season?

With the season-ending injury to Simon Hickey is there a possibility that Jordie Barrett will be seen at first-five this season?

Orbyn Ledger has failed to get a regular run or make a big impact at both the Blues and the Chiefs. Why will the Hurricanes be different?

How would the unavailability of Ngani Laumape affect the Hurricanes backline? Where would the midfield punch come from? Who would the attack be built around?

Will Devan Flanders continue his rapid rise in 2021 and if so where does that leave Vaea Fifita? Flanders is a similar type of player to Luke Jacobson but can he match the Cambridge youngster and crack the All Blacks squad?

It’s expected the spectator who ran onto the track during the Wellington Cup races in January endangering himself and the competitors will be banned from attending races for life. Why can’t rugby have the same penalty for someone who runs onto the playing arena with no right to be there and with dangerous intent?

Contrary to hearsay, and confirmed by Marist St Pat’s chairman Rob Evans, MSP will not be appealing the judicial sanctions imposed by Wellington Rugby after the November 14, Ambassador Sevens incident. Petone is appealing the case, pushing for longer suspensions.

With Richard Gordon, Nick Hogan, Vincent Ringrose, Mike Fraser and Ben O’Keefe essentially all out of the club rugby refereeing frame now who is Wellington’s leading whistleblower? Daniel Mangin, Steve Newson, Colin Te Pohe and Jamie Fairmaid are experienced officials that could possibly rise to the occasion of a Jubilee Cup final. Or is the time ripe for younger talent like Andrew Lawler, Jack Sargentina and Thomas ‘Spock’ Roche to stamp their marks?

The two-year contract for Wellington Pride head coach Ross Bond has expired and the man himself has yet to confirm if he’s reapplying for the position. If Bond chooses to move on, who are the leading candidates to coach the Wellington Pride? Mason Malagamaali’i enjoyed tremendous success with Ories but has just taken a role as the senior men’s mentor.  Rick Whatarau had a successful tenure with the Pride guiding them to their only NPC title in 2006. He remains respected in the high performance space and could make a return? Kent Harris is an ambitious, young and capable coach on the rise having previously held the reins of the Wellington Development men’s side. Could he step up to a new challenge. Is there a woman suitable for the role? Former Black Fern and tearaway Norths flanker Aimee Sutorius has made a strong impression in Otago and with her background in fitness could shake things up?

Why will Roger Tuivasa-Sheck be a more successful rugby player than Benji Marshall?

If Roger Tuivasa-Sheck quickly establishes himself as a Union fullback and Otere Black continues his rise at ten, where does that leave Beauden Barrett in 2022?

If Richie Mo’unga and Josh Ioane are unavailable, who is the next best All Blacks ten?

On the subject of All Blacks flyhalves, this great player is hanging up his boots:

Carter announced his retirement this week at the age of 38. In 2005, 2012 and 2015 he was the World Rugby player of the year and won the New Zealand equivalent, the Kelvin Tremain Memorial Trophy in 2004 and 2005. In the 2015 Rugby World Cup final against Australia he was named man of the match and kicked four penalties, two conversions (one with his right foot) and a dropped goal (from 40-metres out). In total he played 355 professional games and scored 4292 points, winning 27 major trophies. The leading points scorer in All Blacks and Super Rugby history played 112 tests and was on the winning side 99 times. Only 23 times did he fail to score double digits. His 33-point haul against British and Irish Lions in 2005 was described by The Guardian as “the definitive fly-half display of the modern era.” There were naturally speed bumps along the way. A broken leg, a fragile groin and a dodgy knee caused consternation. The injures especially hampered Carter’s ability to attack the line with his usual gusto. He scored a world record 29 tries by a first-five, but remarkably didn’t score try in his last 35 tests. It’s a tribute to Carter’s strength of character, talent, and the selectors’ faith in him he was able to play so imperiously at the 2015 World Cup, altering his game to remain a dominant and relevant presence. In 2016 he won the Laureus World Sports Award for Comeback of the Year award when many 12 months earlier were calling for him to be dropped from the All Blacks. If you were to make a prototype rugby player, a T1000, it would be Carter wouldn’t it?

If Kendra Cocksedge is injured can the Black Ferns win the World Cup? Who is the next best halfback replacement and why?

Despite scoring 132 tries in 55 games for Ories and 46 tries in 34 games for Wellington, Ayesha Leti-I’iga in the current pecking order seems unlikely to make the Black Ferns 2021 World Cup squad. What does she need to do to usurp experienced contemporaries like Renee Wickliffe and Porita Woodman into the side?

How much money is New Zealand Rugby spending to maintain the national sevens apparatus which includes player and management salaries and logistical considerations for hosting training camps. Players are still training and played a mini-tournament amongst each other this past weekend despite having no international competition for the best part of a year.

Thoughts on the rule changes in professional rugby this year?

🤓 Here's a refresher on the two rule innovations coming to #SkySuperRugbyAotearoa this year.

Get the scoop on the new innovations here ➡️ https://t.co/gHOuMibNP3 pic.twitter.com/6f5EKbFGfu

Andrea Jackson has become the first professional provincial union to appoint a woman as its chief executive officer.

Jackson is currently a director on the Wairarapa Bush Rugby Union board and the manager of community facilities and activities at the Masterton District Council. She is set to begin her tenure in March and replaces Shannon Paku who is finishing after three years in the role.

“We’ve got one eye on the short term, but we’re mindful of what we’re trying to deliver for the next two-to-three years.

“You think about the challenges facing rugby and a lot of it does start in community. We want to replenish clubs and build club rugby.”

Everybody’s Game on Prime Video featuring English rugby personalities, Ben Obano, Anthony Watson, Maro Itoje, Ellis Genge and Biyi Alo is an intelligent, wide-ranging and engaging conversation about many aspects of rugby well worth sparing 53 minutes to watch. It reinforces how gormless and contrived many of the discussions in New Zealand often are. Showing some personality is okay.

Hi everybody! It’s Alex! Look what’s arrived today! Thank you @WaspsRugby @jimmygopps & @GallagherUK I will cherish both of these and wear them for good luck for the game against the Warriors this weekend. 💪🏻🦿🏉 🐝 #AlexandersJourney #Rugby #Wasps #CancerRehab #ChildhoodCancer pic.twitter.com/G2ttmK2wBd

Our schedule of rugby coming up over the next several weeks (updated):

Rugby coming up in February, March and April

The collective authorship of Short Passes is ‘By Club Rugby Contributors’, so the more contributors to this the more thorough and wide-ranging this column can be. To contribute anything from your club, team or personal perspective that will be informative or newsworthy (or both) please message us on Facebook or email editor@clubrugby.co.nz