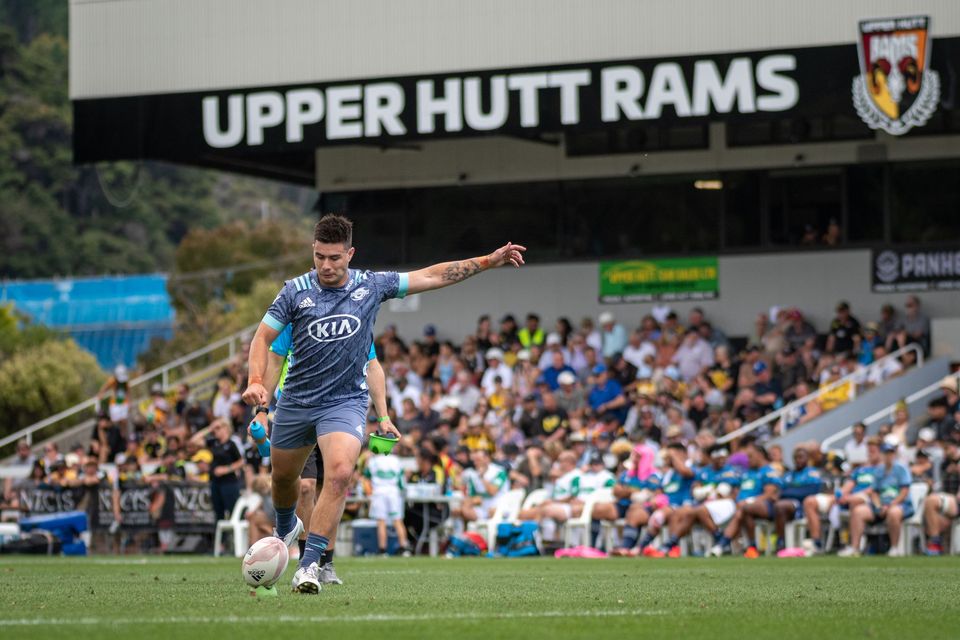 Above: Jackson Garden-Bachop kicks for goal in front of a bumper Maidstone Park crowd. Not since the glory days of the late 1980s-early 1990s has it been as packed. PHOTO: Tom Minton.

Short Passes is our ‘early in the week’ (usually Mondays, but starting the year on a Tuesday) news in briefs, tidbits, observations and anecdotes, statistics and an overall look at what’s coming up article.

The collective authorship of Short Passes is ‘By Club Rugby Contributors’, so the more contributors to this the more thorough and wide-ranging this column can be. To contribute anything from your club, team or personal perspective that will be informative or newsworthy (or both) please message us on Facebook or email editor@clubrugby.co.nz

There is one match ***scheduled**** this coming weekend, in Palmerston North, the first round of the new Hurricanes region inter-academy competition between the Manawatu and Hawke’s Bay academies.

Rugby started this past weekend, with two sevens tournaments and a Super Rugby warm-up fixture.

Results at a glance were:

The game of three halves at Maidstone Park on Saturday involving the Hurricanes, Chiefs and Blues was largely a success. Big crowds enjoyed the Upper Hutt sun and watched a physical Chiefs outfit win both games while the Hurricanes beat the Blues. Disappointingly however the Blues failed to provide a team sheet with accurate numbers. How hard can it be for a professional side to supply those details even in a pre-season fixture?

Also why aren’t fans allowed to roam on the field after the game, instead ushered like battery hens to a cordoned off area to meet the players. Is this a COVID restriction? What’s the worst that could happen? Is Gunter Parche loitering in Wellington?

The  Colts saw Wairarapa-Bush team Martinborough beat Palmerston North club Freyberg 28-24 in the final. These two teams and Hutt Old Boys Marist finished tied at the end of the round-robin, the Eagles missed out on the decider.

To many ears, ‘Marty’ appeared to be the best player on the field by a long shot. Until Club Rugby’s correspondent clicked at the end that the shouting and general constant praise for Marty was for Martinborough’s team in general and not for the next Grant Batty.

Just eight Hawke’s Bay clubs entered teams in this tournament, with a distinctly Fijian flavour in several of the composite teams.

Hutt Old Boys Marist’s Colts aside, frankly it is extremely disappointing that no other Wellington clubs or composite teams could make the trip north to either of these two tournaments. There was a Six60 concert on in Wellington Saturday night, but fitness and exuberance is also a contributing reason why the Manawatu Cyclones ran rings around the Wellington Pride a few months ago at the same venue as the concert, and many of these same Cyclones women’s players got 2021 off to a flying start on Saturday.

The next sevens tournament is the annual Shannon 7s coming up on Saturday 27 February at the Shannon Domain. To enter contact the Horowhenua-Kapiti Rugby Union and they can put you in touch with the organisers.

A couple of years Club Rugby put the case forward for a ‘Hurricanes-region’ sevens circuit. This would be backed and endorsed by the Hurricanes and feature a tournament leg each in most of the Hurricanes unions. Different teams would naturally enter the various tournaments, but if they got organised there could easily be a few composite or invitational teams, that could enter most of these and a points system could be set up to find an overall circuit winner. Plenty of these potential teams about, such as the recently established Matakisi side  with strong links to the BoP and Manawatu and points in between. Two examples in Wellington are the Wellington Samoa Rugby Union and the Centurions RFC, who could both establish a pool of players to attend these tournaments over the summer. Same with the NZ Marist Federation, who could surely muster a dozen players from the wider region for a composite Marist side to compete at these tournaments.

Red cards are headlining the Six Nations. This weekend Scottish prop Zander Ferguson was sent off in the 54th minute of his side’s 24-25 loss to Wales. Scotland was leading 17-15 at the time. In a dramatic test Scotland was denied a try in the seventh minute and possibly should have achieved a fifth straight championship victory for the first time since 1986. Was it fair? Opinion is split. Read more here

It’s not the first time the Scottish have seen red against Wales. In 2006 Scott Murray was sent off by referee Steve Walsh after he perceived that Murray retaliated by lashing out with his boot following a late tackle by Ian Gough. His sending off was seen as a decisive point in the game that Wales won 28–18. In 2014 Stuart Hogg was red-carded against Scotland, an international Wales won easily.

Wales second row Geoff Wheel and Ireland No.8 Willie Duggan were the first players sent off in a Five Nations test in Cardiff in 1977. Referee Norman Sanson gave them their marching orders for their roles in a brawl during Wales’ 25-9 victory at the Arms Park. Wheel and Duggan were real characters. Wheel was capped 32 times and was an organist and gospel singer of repute.

Duggan, who died aged 67 in 2017, played 41 tests and was renowned as a “hard man” with a real sense of humour. According to fellow player Moss Keane, Duggan did not consider himself to have been sent off, simply being asked by the referee “would he mind leaving the field”, to which he replied “Sure not at all. I was buggered anyway” In 1982 as he ran out in a game against England, at Twickenham he handed the referee Allan Hosie a lit cigarette. Told by a coach that if he gave up the smokes he would be faster around the pitch, he replied “but then I would spend most of the match offside.”

Louis Rees-Zammit scored two tries for Wales in their 25-24 win over Scotland. The 20 year old is one to watch. A former Welsh Under-20 rep he debuted for Gloucester aged just 18 years and 70 days old, the youngest player to ever make a premier debut for that club. He beat out Sam Underhiill, Ross Moriarty and James Simpson-Daniel, all internationals for that honour. He is also the youngest player to score a hat-trick in a English premiership match.

Last week Aaron Smith labelled rival French halfback Antoine Dupont as the best in the world. The French scrum-half whose played 30 tests had another strong showing in France’s 15-13 win over Ireland in the Six Nations this weekend. Interestingly Fabien Galthié, a top halfback himself, since becoming coach of France has won 10 of 12 tests. An excellent peace from Roar analyzed the approach of Dupont. Read more here

For the first time in a decade neither fly-half Johnny Sexton or scrum-half Conor Murray started for Ireland in a Six Nations match. That resulted in an inexperienced pairing of Billy Burns and Jamison Gibson-Park. The latter won a National Top Four First XV title with Gisborne Boys’ High School in 2007. He played for Taranaki (NPC champs, 2014), the Maori All Blacks, the Blues and the Hurricanes (Super Rugby champs, 2016) before relocating to Ireland in 2016,

Silverstream rugby are seeking expressions of interest for rugby coaches, for all grades ranging from U55kg- 1st XV.

Please complete the ROI template(found in Advert above)​ and forward your registration to the Silverstream Director of Sport, Warrick Bowden at bowdenw@stream.school.nz

This comes after the easing of adjusted level-three lockdown regulations, with infection rates on a downward curve. A working group from SA Rugby, consisting of SA Rugby members, provincial unions and the South African Schools Rugby Association (Sasra) made the recommendation to the executive committee, who subsequently gave the go-ahead. Read more HERE

Back home, the Blues have cancelled their pre-season match this coming weekend against the Crusaders, while the Highlanders v Hurricanes fixture at Alexandra is in doubt at the time of this being published.

Our calendar of what’s coming up in rugby is below:

Rugby coming up in February, March and April