Skip to content
You are here
Home > All Blacks > Rugby in 1921: Part two representative rugby 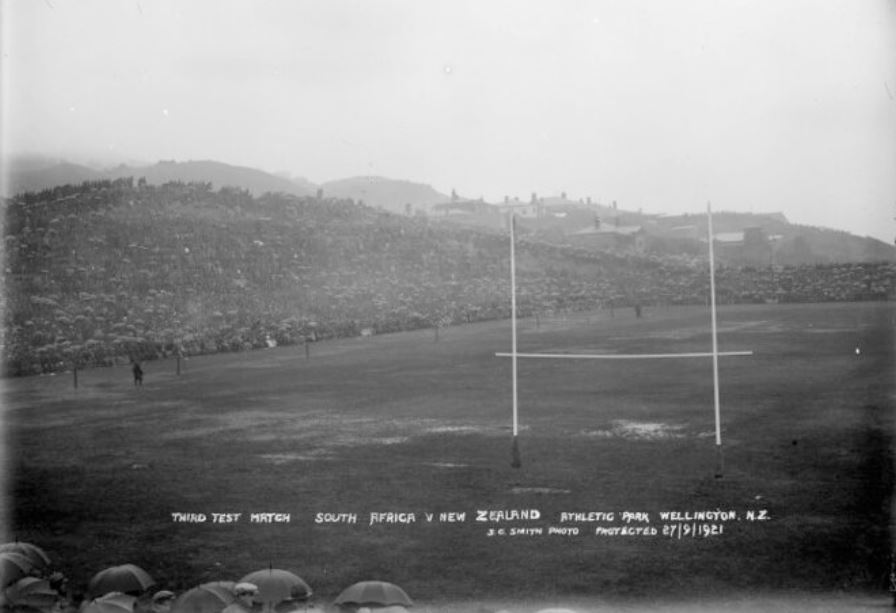 Athletic Park in Wellington was the place to be for rugby fans in September 1921.

In a little over a fortnight, from 7 September to 24 September, the former ground in Berhampore hosted two international matches and three Ranfurly Shield fixtures.

Accounts of these games and the circumstances in which they were played follows.

Following an eight-year hiatus owing to World War One and its immediate after-effects, there were two in-bound tours by international teams in 1921.

The major tour was that of the Springboks, the first time New Zealand and South Africa national teams had faced each other (see below).

The second but no less important tour for different reasons was that by New South Wales, which ran concurrently.

Combined the two teams played 29 matches against New Zealand combined and standalone provincial teams and the All Blacks.

The New South Wales tour played second fiddle to the Springbok one, but it served to give rugby in Australia a shot in the arm that it needed after being on the cusp of dying during the war when the Queensland union went into hiatus and NSW rugby was mainly kept alive by the schools.

NSW’s game against Wellington was the 10th and final one of a successful tour.

NSW were unbeaten through their first nine matches thus far and only Wellington stood in their way of a perfect record.

After sweeping all before them, including big wins over Waikato (28-11) and Bay of Plenty (29-3), NSW beat the All Blacks 17-0 in Christchurch. The All Blacks team they met was mostly a second string side and perhaps would be the ‘New Zealand A’ side today. Wellington players in that team were Eddie Ryan (Petone), Pauk Markham (Marist Old Boys), Beet Algar (Poneke), Teddy Roberts (Athletic, captain) and Syd Shearer (Poneke).’

These players plus All Black George Aitken (University) and former All Black Alex Bruce (Athletic) were included in the Wellington team to play NSW. Following an aboriginal war dance by the visitors, the game kicked off in fine conditions before a crowd of 10,000. NSW scored first, but Wellington equalised with a try to Ryan following a centring kick by Markham and it was 3-3 at halftime.

Wellington had the wind in the second half and rattled on three more tries, including two to halfback Ted King (Poneke) and one to forward Arthur Parker (Petone) and Wellington won well.

The second half was marred by some scrappy play and later some suggestions of foul play by the visitors. The NSW manager even came on to the field at one point to cool his players.

Four days later Southland came to town with the Ranfurly Shield with them.

Wellington had taken the Ranfurly Shield on the road the previous year and lost it to Southland in Invercargill. The Southlanders were returning the favour, giving Wellington the opportunity to take it back.

Southland had just beaten a gritty Wairarapa side 10-8, and seen off a strong Otago 10-8 (the same score) at home before that so were always going to be tough.

Another crowd of about 10,000 was in full voice when the main match kicked off in fine, breezy conditions.

The men in maroon had the better of the first half and led 8-6 at the interval, after leading 5-0 early (three-point tries).

Mark Nicholls (Petone) kicked consecutive penalties early in the second half half to put Wellington up 12-8. Inside back F.C Hutchinson (University) dummied and scored under the posts to extend the lead to 17-8. Hutchinson kicked a goal from a mark to make it 20-8 and replacement C.J.M. Gair scored another try to make it 25-8. Southland hit back with a try of their own, but right on fulltime Syd Shearer crossed for Wellington to complete an emphatic win.

Wellington now had to prepare for back-to-back defences against Auckland and Otago – but first the rugby public had the third and deciding test between the All Blacks and Springboks to look forward to.

The inaugural All Blacks-Springboks series for world rugby supremacy came to Wellington for the third and deciding test.

This was South Africa’s second match on Athletic Park of their 19-match tour that had kicked off in July.

On 23 July they had beaten Wellington 8-3, in a match that was billed as the unofficial ‘fourth test’ of their tour. Eleven of 15 players in Wellington’s line-up that day had been or were to be All Blacks, while five had toured South Africa in 1919 with the NZ Army side. There was no scoring for the first 25 minutes, and it was 3-3 at halftime. The Springbok forwards muscled up in the second half, particularly troubling Wellington in the scrums where they constantly changed their formation from 3-4-1, to 3-2-3, 3-3-2 and 3-4. Springbok halfback and captain J.P. Michau scored a dazzling individual second half try and they won 8-3.

Fast-forwarding to September and to the deciding test, the All Blacks spent the week at Day’s Bay in hard training, swimming and playing backyard cricket in their downtime. A record crowd was predicted, and all local accommodation was fulling up fast.

By Thursday, the weather forecast was not flash, while the local media’s interest in team selection focused on whether Poneke’s Beet Algar’s ankle injury (he missed games with a shoulder injury earlier, so either he was in the wars or they mis-published which body part) would prevent his selection at centre. His back-up and subsequent replacement would be Petone’s Mark Nicholls, aged 19 and making his mark in rugby as a first or second five-eighth.  A third Wellington outside back, George Aitken, had been dropped after the second test which caused a minor sensation given he was also captain in Auckland. A fourth,  University’s Keith Siddells, was normally a fullback but he started on the left wing. Halfback Teddy Roberts replaced Aitken as captain, while Oriental hardman Jim Moffitt was Wellington’s fifth representative and played in the tight forwards.

On Friday night it started raining. It rained hard all night and all morning and showed no signs of letting up so the decision was made to cancel the three curtain-raisers, including Wellington B v King Country. By 2.00pm there were 20,000 at Athletic Park and by 2.30pm 25,000, and the rain was still falling. After a mild winter and recent fine weather, Athletic Park was under water in parts  and conditions were appalling come kick-off time.

Nevertheless, both teams fought hard with positive intent. The Springboks had the edge in the first half and missed chances through a knock-on over the line and a penalty that hit the uprights and bounced back into the field of play. The All Blacks had the upper hand in the second, with Siddells diving on a loose ball over the tryline but the referee not awarding the try and West Coast right wing Jack Steel going desperately close on at least two occasions.

Nothing stuck and the final score was a 0-0 draw and the series was tied 1-1 with seven years until they would meet again.

Hardy fans had dried out and were back at Athletic Park four days later for Wellington’s first Ranfurly Shield defence.

Once more, Wellington’s depth was tested owing to the unavailability of All Blacks players and injuries, although Beet Algar was passed fit and he joined his brother Doug in the home team’s backline.

Wellington was captained by Reverend Paul Markham, who had been training with the All Blacks at Day’s Bay the previous week. Markham was the playing name of Father Paul Kane.

A willing first half saw both sides score two tries and Auckland leading 8-6 at the turnaround. After halftime, Beet cross-kicked to brother Doug to score the try and Mark Nicholls converted to put Wellington up 11-8. Auckland hit back with their third try and it was 11-11. But a third Wellington try followed by a Nicholls dropped goal and then two tries to Sid Shearer and Nicholls – both set up by Beet Algar – put the game out of reach of the Aucklanders. The visitors scored a consolation try on fulltime to midfielder Karl Ifwerson, who had also played in the third test the previous Saturday.

Wellington B beat King Country 11-3 in the re-scheduled curtain-raiser, a second long-range half intercept try to wing McCabe proving the telling score.

Yet more changes to Wellington’s side for this clash, including the return of Siddells at fullback and first test hero Ginger Nicholls (Petone) at halfback.

Otago were coming off a 6-6 draw the previous Wednesday with Hawke’s Bay in Napier and had narrowly lost to Southland in their first Ranfuly Shield of the season in August.

In contrast to the previous Saturday, the day was perfect and 10,000 spectators were present to see if Wellington could lock the shield away for the summer.

Otago had first use of the breeze and they scored the game’s first try. They then missed two consecutive penalties that both proved costly misses. Wellington halfback Nicholls kicked a dropped goal and Poneke’s Ted King burst through a tackle right on halftime to put Wellington up 7-3.

The run of play remained tight as Otago’s forwards proved strong and powerful. Otago scored a second try, after a midfield mix-up between Wellington backs Markham and Siddells and they went ahead 8-7.

The clock was winding down, so it was with much relief when Athletic club forward J. Duncan crossed for Wellington to put them up 10-8. Mark Nicholls made a break and scored on fulltime to give Wellington a 13-8 win.

It was a shaky end to a busy season and action-packed September, but the Ranfurly Shield was locked away for the off-season. The following August Hawke’s Bay would come to town and upset Wellington and take it back to Napier for the start of a famous run of defences. But that was all in the future as Queensland contained a bubonic plague outbreak and Germany was grappling with rising inflation in some of the other news of the day in September 1921.

Part 1 of the 1921 series looking at club rugby below:

From the vault: fourth round matches in photos