Skip to content
You are here
Home > Club Rugby > Looking back a century: rugby in 1921 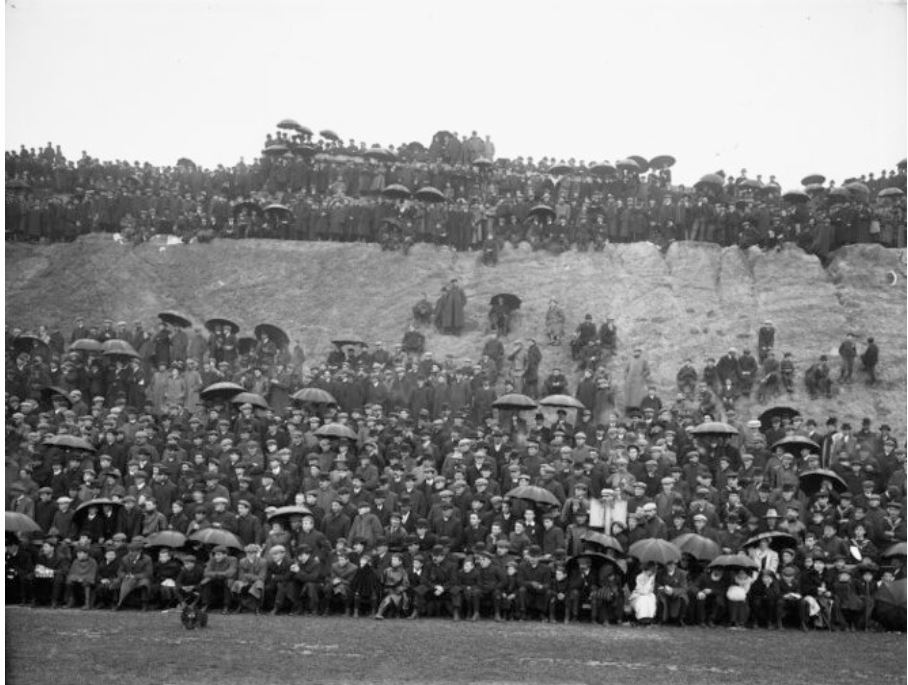 A typical ‘western bank’ Athletic Park crowd on any given Saturday in the early 1920s. Photo: Sydney Charles Smith (full details in article credits below).

A look back at the rugby scene from a Wellington perspective 100 years ago.

As was previously covered in this article here about the 1919 season, the end of the first world war ushered in a brief golden age for Wellington rugby:

Wellington was the Ranfurly Shield holder throughout the war and defended the shield 15 times in 1919 and 1920 – including taking it on tour and brazenly putting it up in away matches – while the club championship regularly attracted crowds several thousand strong and the rugby was fierce and competitive.

­This was a time when Wellington had a dozen or so players who were either recent, current or future All Blacks, and they regularly played club rugby.

In club rugby, the rivalry between the Poneke and Petone clubs was at its peak, with these two clubs winning the Senior Championship between them every year from 1919-1925. Poneke would be champions again in 1921.

In representative rugby, there was a lot going on, with two in-bound tours from overseas teams including the first ever Springbok tour that gripped the country. In domestic rugby, Wellington had relinquished the Ranfurly Shield to Southland the previous year but regained it in the spring.

Poneke and Petone were the dominant teams and between them had many of the best and well known players in the years immediately following the first world war. Poneke were champions in 1919 and Petone had won in 1920. They were joint favourites heading into 1921.

Other clubs in the mix included Athletic, who were rebuilding with a young team and who would be runners-up in 1923 and champions again in 1926, competition newcomers Marist Old Boys and University –  if they could retain their players from the pull of their rigorous studies and the scheduled New Zealand Universities tour to NSW.

Wellington FC, Oriental, Selwyn and Berhampore were the other four teams in the mix in a nine-team Senior Championship competition, meaning one team would have the bye each week.

The season started in early April with 16 teams entered in the seven-a-side tournament held at Athletic Park. Several thousand spectators turned out to watch Berhampore take the sevens title, beating Petone A in the final.

There was thus huge expectation ahead of the 15s season proper getting underway the following week. Including the Senior Championship competition, there were 92 teams entered across all grades, up from 79 the previous year.

Over the following two weeks Petone beat Selwyn and then University and Poneke beat Athletic and then Marist – so the two favoured sides both safely negotiated the opening three rounds unbeaten. In his column in the Evening Post, “Drop-Kick” noted that he saw Petone’s back play as looking superior, singling out both Harry and Mark Nicholls and Matt Corner and Eddie Ryan on the wing as showing strong form, while Poneke’s forwards were lining up strongly (both forwards Hughes and Shearer would be All Blacks later in the winter). A couple of weeks later, the same columnist gushed that ‘Petone have studied the art of attack on the principle that attack is the best defence. Every player is fit and can play a better second spell than the first. The man who knows his own mind will always beat the man who doesn’t, and that is why Petone win.’

Round four was played in appalling conditions and Wellington and Marist drew their first ever Senior Championship encounter 0-0, as Petone beat Athletic 13-3 and Poneke had the bye.

Poneke returned from their bye to defeat Oriental 10-6, Petone made it five straight with a 29-8 win over winless Wellington, in another draw Selwyn and Athletic ended on 8-8 and Berhampore beat Marist 8-6 with Fuller kicking an 80-yard goal in a cross-wind at Athletic Park.

On to round six, Petone beat Oriental 21-6 and Poneke beat Selwyn 12-3, setting up a blockbuster King’s Birthday weekend clash in round seven between the two leading clubs.

After six matches, Petone’s fifth-class competition team was also carving up, unbeaten having scored 219 points and conceded 0, while new club Eastbourne were noted for being competitive in their debut year in the third grade.

At least 8,000 people were on hand to watch Poneke beat Petone 8-6 in the biggest match of the season thus far.

Poneke took Petone on in the forwards. Playing into the wind, they scored the game’s first try when wing Jimmy Tilyard set up D. Algar for the three-pointer. Petone replied with their own try in the corner but Poneke scored again from a centring kick. Mark Nicholls landed a long-range penalty for Petone and Poneke led 8-6 at halftime. The second half was full of missed opportunities from both teams and there was no further scoring.

The following weekend saw Oriental pile on 18 points in the first half and hang on to beat Athletic 21-20, Petone bounce back to beat Marist 14-8, Poneke overcome Wellington 22-5, after the previous year’s All Blacks captain Jimmy Tilyard had transferred to Wanganui, and Berhampore defeat University 17-0.

Big news mid-week was the erection of a scoreboard at Athletic Park and the near-completion of a new toilet block at the ground, all in preparation for big games to come including the inaugural Springbok test in September.

Petone had the bye next week, while Poneke’s edging of Berhampore 6-5 saw the red and blacks move to the outright lead at the halfway point in the competition with eight straight wins. But this run was about to end.

The second round of the competition started sensationally with Oriental beating Poneke 10-9, a margin of victory that could have been more if not for a controversial Poneke try that was awarded. Petone beat minnows Wellington 36-6, with forward Arthur Parker noted as playing well, to see them and Poneke level-pegging at the top of the table. Elsewhere, Berhampore beat Marist 6-5 courtesy of a last-gasp try.

A number of players across all teams, but especially Petone and Poneke, were absent from the next round owing to the annual North-South representative match in Christchurch, (which North would win 28-13).

Undermanned, Poneke suffered their second successive loss, this time going down to Athletic 11-6. Petone beat Oriental 11-6 to reclaim the outright lead. In another notable match, University had the services of their NZU players who had been on tour in Sydney and they beat Marist 9-8.

The region’s many representative players were kept busy, with the Possibles vs Probables All Blacks trial held at Athletic Park the following Wednesday. and no fewer than eight Wellington players were chosen for the first test team to meet South Africa on 13 August in Dunedin. These players were: George Aitkin (University), Mark Nicholls (Petone), Ginger Nicholls (Petone), Ned Hughes (Poneke), Jim Moffitt (Oriental), Teddy Roberts (University), Beet Algar (Poneke) and Sid Shearer (Poneke). There was some questioning as to why Roberts was only chosen as an emergency (reserve) and not in the starting side proper.

Poneke’s mid-season wobbles continued, losing to University 6-3, while defending champions Petone beat Berhampore 21-6 to open up a 4-point (two-wins) lead at the top of the table to second placed Poneke, and with Oriental and Berhampore a win back in third equal.

Petone’s lead was cut in round 12 when they were defeated by Athletic 11-6 in pouring rain that that kept scores down at the three other venues. Wellington and Selwyn drew 3-3, Poneke beat Berhampore 6-3 and Oriental toppled University 6-3.

Club rugby took a back seat the following Saturday, with Wellington hosting the touring Springboks. In cold conditions, a crowd of 27,200 (revised down after a turnstile miscounted numbers) saw the Springboks win this match 8-3. The Springboks would return to Wellington for the fourth test in several weeks (covered in the next article).

With club rugby resuming from its week off, the Senior Championship took another dramatic twist on Saturday 30 July with not one but two clutch results.

For the second time in the season, Poneke beat Petone, winning 17-5 for a decisive win. Played at Petone, the visitors unleashed wave after wave of furious attack, coming back from a 5-3 deficit in the first half. Backs Fred Tilyard and Beet Algar both had big second halves for Poneke, who also lost All Black forward Jim Shearer during the game to an ankle injury.

Elsewhere, Oriental moved up to third, just two points back, after beating Marist 8-0, while Wellington earned their first win of the season by beating Berhampore 5-3.

Wellington College Old Boys wrapped up the Junior Championship this weekend as well, winning the grade with 12 wins from 13 ahead of second placed Petone and third placed Hutt and Selwyn (all three with 8 wins).

St Pat’s Town beat Wellington College 3-0 in their annual First XV fixture – their first victory over them since 1908.

The first weekend of August saw the final round of the Senior Championship competition, with Poneke in the box seat to win outright. They had to beat strugglers Wellington for at least a share of the title and to then win it outright hope that an All Black and injury-weakened Petone lose to a resurgent University who were hitting their straps after a disjointed season when they lost several players to the NZU team for a time.

This is exactly what transpired. University toppled Petone 14-3 and Poneke beat Wellington 12-3, and thus Poneke were deemed the winners of the competition and took home the Senior Championship of 1921.

A fortnight later Poneke also locked away the inaugural National Mutual Cup – a post season one-off challenge match against another club as decided by the WRFU management committee.

University was awarded that challenge at a special mid-week meeting. While never in the hunt for the title in large part owing to the NZU tour to NSW which depleted their team, the students had beaten both Poneke and Petone in the second round. Poneke won this final match of the season 9-7, before a 6,000-strong crowd, with proceeds going towards further development of the Athletic Park ground.

Poneke, Petone and Athletic would go on to rule Wellington club rugby over the next several seasons as the established players continued to dominate and younger players made their marks.

Petone would be champions in 1922, 1923 and 1924, with All Blacks five-eighth Mark Nicholls driving their ship. The 1922 ‘final’ at Athletic Park between Petone and Poneke would draw an all-time Wellington club rugby record 16,000 spectators. Read our previous article about the 1922 final HERE

Poneke would win again in 1925 and Cliff Porter’s Athletic take the title in 1926. Finally in 1927 the shackles were broken and Wellington College Old Boys captured their one and only pre-Jubilee Cup title and University won in 1928 and again in 1929, the first year of the Jubilee Cup.

Some 22 new clubs joined the WRFU’s Senior competitions in 1919-1939 period between the wars, though only one – Eastbourne – still survives as a standalone club.

Part two of this series looking at the domestic and international rugby – including ‘Super September’ at Athletic Park –  from a Wellington perspective to come.