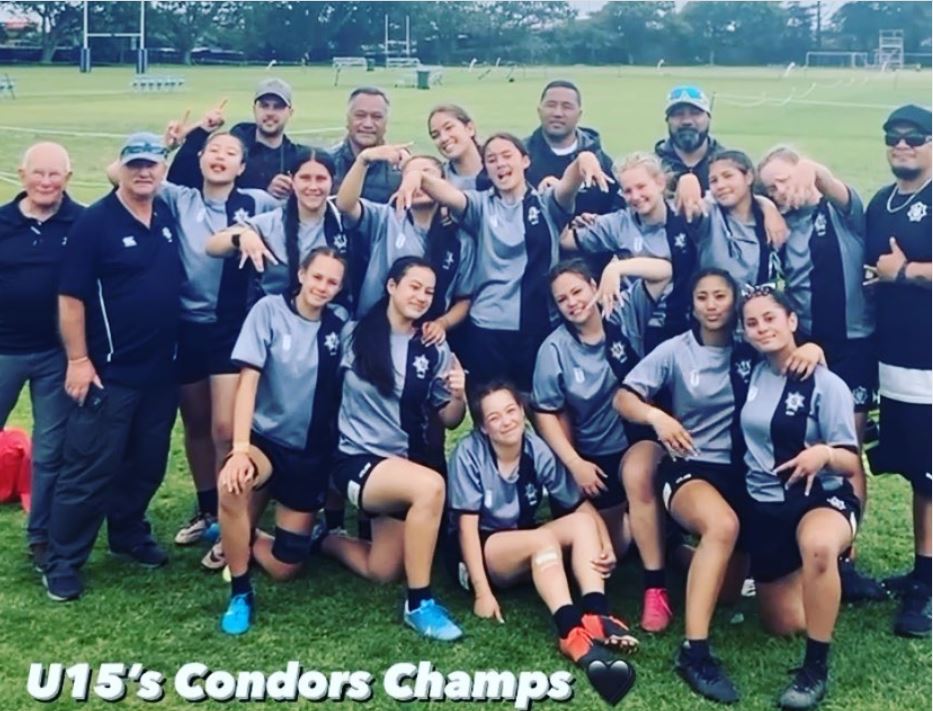 For only the second time in the event’s history, one of the Cup titles at the Condor Sevens is making it’s way to the capital. This time it’s St Mary’s College and their Under 15 side who are champions – emulating the 2016 success of their senior side – after beating Auckland’s One Tree Hill College 15-12 in yesterday’s final.

It was a far from east road to the title for St Mary’s, drawn in a tough pool with regular contenders Howick College and Hamilton Girls but both were seen off (17-10 and 34-0 respectively) before a 49-0 romp over minnows Inglewood HS and a 15-12 win over Epsom Girls to finish pool play. That set up a quarter-final with St Peters Cambridge (won 15-7), a rematch with Howick in the semi-finals (22-19) and then the final against One Tree Hill who had beaten hot-favourites Manukura 17-12 in the other semi-final.

Things were rather different however for their counterparts St Pat’s Town in the U15 Boys competition, though they had the misfortune to be in the same pool as both eventual finalists. Three losses to Shirley Boys (10-19), Hamilton Boys (7-29), and Auckland’s De La Salle (0-26) were only partially offset by a 31-17 win over Kerikeri HS, placing them into the third-tier Bowl competition. There they  and then beat Francis Douglas Memorial College (26-0) in the semi-final to advance to the final. There they missed out to New Plymouth Boys’ HS (0-29) , finishing 18th. Hamilton beat De La Salle 19-7 to reclaim the U15 title.

Owing to schedule pressures the Under 15 tournament followed the Open one, which was played on Thursday and Friday and covered in great detail in Adam Julian’s report published here. To recap however it was a largely underwhelming one for the Wellington contingent. Regional winners St Pat’s Silverstream were the best performed of the three Boys teams, finishing 10th overall after losing the Plate Final 21-22 to Rotorua Boys, but were left rueing two first day losses to Whanganui Collegiate (12-21) and Mt Albert Grammar (21-22) that cost them a place in the Top 8 despite also posting impressive wins against Wesley College (38-5) and Westlake Boys’ (19-12). Their playoff slate saw wins over Timaru Boys’ (29-7) and Palmerston North Boys (14-10) before that last-up loss. Riley Higgins, Peter Lakai, and TJ Clarke all had excellent tournaments.

Town and Scots both endured tough weekends. Town’s high hopes suffered early setbacks when well beaten by Rotorua (0-22) and hosts King’s College (5-29) in their opening matches before recovering to beat Marlborough Boys (20-19) and St Peters Cambridge (17-7) in pool play. A late addition to the field and with a young side Scots weren’t expected to contend and could only muster a single win on day 1, finishing with a 27-5 win over minnows Whangamata after earlier losses to Palmerston North (10-14), Hamilton Boys (0-49), and Kerikeri (17-24). The pair then met in the third-tier Bowl which Scots won 22-7, but both campaigns ended at the next stage; Scots were beaten 26-22 by New Plymouth Boys courtesy of some last-moment brilliance while Town went down 12-15 to Gisborne Boys, leaving ranked 19th and 23rd respectively of the 30 teams.

In the Girls competition it was a similar story for the St Marys’ senior team, who also suffered a pair of first-up losses to Manurewa HS (10-12) and Howick College (5-38) that put paid to their Cup aspirations. Wins over Sacred Heart Hamilton (21-17) and Whanganui HS (27-5) saw them placed into the Bowl section where after a win over Southland Girls (31-10), they exited with an 11th placed finish after going down 12-14 to New Plymouth Girls.

On paper, the other Girls representative from the capital, Sacred Heart College, had a difficult debut. But the results don’t tell the full story as they held leads at some point in each of their games in a very tough pool, but losses to New Plymouth (10-31), Hamilton Girls (7-31), Southland Girls (14-24 featuring a pair of refereeing howlers that cost them a try and saw Southland gifted one), and Mount Albert Grammar (5-35) saw them placed into the bottom-four Shield competition. There they emerged with a piece of silverware after wins over Whanganui HS 19-10 and Taupo-nui-a-Tia College 22-12 to cap their first appearance at the event.

Howick College reclaimed the Girls title after being runners-up last year by beating Manawatu’s Manukura in the final, while in the Boys Hamilton continued their dynasty in winning their sixth-straight crown after topping Kelston Boys.

Attention now turns to the World Schools 7s this coming weekend, which will take place in a much-reduced form owing to the Covid pandemic. Teams for the event are slowly being named with a solid contingent of Wellington players being included. Silverstream’s Riley Higgins is in the flagship NZ side which will be again coached by Scots’ Sam Rasch, while his schoolmate Peter Lakai will front for the Tongan Barbarians. Additionally no fewer than five Wellington players are in the Samoan Barbarians team (which will be coached by Charles Aliva and assisted by Tomasi Alosio); Scots pair Dominic Ropeti and Ieti Campbell, Silverstream’s Tony Solomona, and Wellington College duo Caleb Stanley and Joshua Williams.

The winning St Mary’s College U15 team was:

St Pat’s Town too strong for Wellington College in traditional