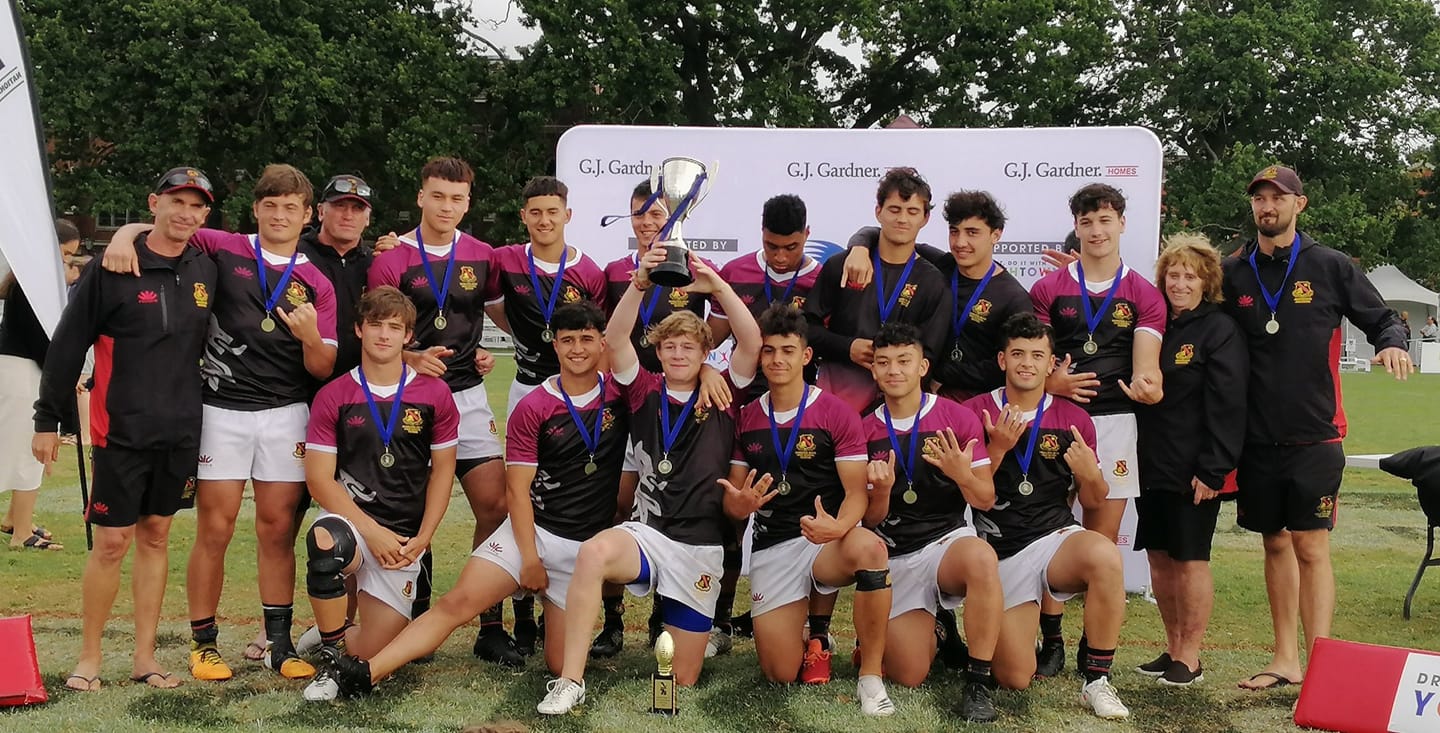 With 40 plus referees, 50 teams (30 boys, 20 girls – that’s 600-odd players in addition to a platoon of coaches and management) competing in 170 matches on four fields, backed by 29 official supporters with a newfound commitment to wellbeing (perhaps Remedy Kombucha is a more appropriate sponsor than Westie Pies? Sevens pioneers Ned Haig and David Sanderson were Scottish butchers, however), complemented by 100 hours of broadcast footage fronted by at least half a dozen commentators and a VIP Pass for $200 that gets you closer to the action with luxury and includes exclusive onsite parking, access to VIP only facilities, and light refreshments, the 2020 Condor Sevens at King’s College in South Auckland might be the biggest sevens event in the world. It’s certainly the largest south of the equator.

Take a breath. There were ambulances, sausage sizzles, league scouts, brethren, an announcer warning patrons whose cars were parked in the wrong place to move or else, and 41 NZ COVID Tracer QR Code posters too.

In the Girls Cup final, Howick College of Auckland is starting somewhat of a dynasty too. In shading Manawatu’s Manukura College 12-7, they scooped a second title in three years.

Down 7-0, it was Kelston who settled quicker after a lengthy second-half injury delay. Elam Payne turned sharply and fended off his opposite creating the prospects of a boilover at 7-5.

However, one lapse in concentration was fatal. Tyron Hilton skipped 65-metres clear following a one on one missed tackle to touch down under the sticks. At 14-5, it was curtains for Kelston. A late Lanhi Fihaki strike was a credit to Kelton’s persistence. Hamilton’s Cody Nordstorm was named Boys MVP.

Unfortunately, there was not a National Top Four this year but in winning the Super 8 and Condors yet again, Hamilton boasts a tenuous claim as 2020 National champions. Ironically, the last time they were unbeaten in 2008 they technically were not the National champions either. De La Salle College of Auckland scored first points in a drawn top four final and the rules of the time stated that they prevailed in the event of a tie. Hamilton’s records and photos will show an unbeaten 2013 First XV but they lost to King’s College in a pre-season fixture. Maori All Black Mitch Karpik still talks about it!

The Auckland XV’s season was ruined by the pandemic but a horde of well-prepared outfits from the ‘City of Sails’ representing both genders was on display, none better than female Cup winners Howick College.

Breezing through their first four games, and scoring 149 points, Howick was genuinely extended by Hamilton Girls’ High School (15-10) and Mount Albert Grammar School (19-7) in their next two fixtures en-route to the finale against Manakura.

Claret and courage were shared in equal measure during a bruising opening salvo before Djian Brown cracked open the Manakura wall, stepping left and dashing 40-metres.

Howick kicked the ball dead a metre out from the line and opened up the defence with a marginal forward pass as they threatened to apply the blowtorch.

Manakura’s Kaipo Olsen-Baker steadied the ship when she charged 50-metres inspirationally to showcase why the Black Ferns are already interested in her talent. However, Elenoa Gukirewa produced equally spectacular pyrotechnics as Howick reclaimed the ascendency and held on for a special triumph. Jorja Miller from Christchurch Girls’ High School was tournament MVP.

In 2011 the Condor Sevens was a two-day open boys’ tournament with 16 schools. Today it runs longer than first-class cricket, barely recognisable from a decade ago.

The girls’ competition which started humbly in 2012 has grown into a beast. The awesome New Zealand Sevens team is an inspiration to many young women so perhaps the Cup trophy could be named the Sarah Hirini/Rob Jones trophy. The Black Ferns Sevens captain was in that Feilding team and Jones’ superior coaching and organisational drive of the polished article opened pathways unimaginable at the time.
The Condors are a triumph of imagination and logistical management but are they sustainable long-term at their present size? How much money is involved and where does it all go?

Has the sheer quantity of teams diluted the quality of competition overall? An empirical analysis of past results would resolve that query. Sure, more players mean more talent gets exposed, but are some heading full-steam down a garden path?

The Condors: A house of cards waiting to collapse or a brazen step towards a new frontier of high school sporting events. Only time will tell. At the moment there is nothing quite like it.

Slide to 1:43:31 for Whangamata Area School vs. Pukekohe High School

P.S. Unfortunately none of the five Wellington sides were headline writers. St Patrick’s College, Silverstream were the best performing, narrowly losing the Plate final 22-21 to Rotorua Boys’ High School. Silverstream had lost to Mount Albert Grammar School by a point in pool play to miss the Cup quarter-finals. The Catholics led twice against Rotorua only for a Tamakaimoana Whareoarere double consigned Stream to another painful defeat. Scots College beat St Pats Town 22-7 in the Bowl quarter-final but then succumbed to New Plymouth Boys’ High School 26-22 in the semi. Town capped a disappointing tourney with a 15-12 loss against Gisborne Boys’ High School in the Consolation Bowl semi.

St Mary’s College is a shadow of their former selves. The 2016 Cup winners lost to New Plymouth Girls’ High School in the Bowl semis. Sacred Heart College returned with the Shield silverware beating Taupo-nui-a-Tia College 22-12 in the final. Winless, but leading every match briefly on the first day, Sacred Heart made a hearty debut.

No teams qualified yet after high scoring round of club rugby