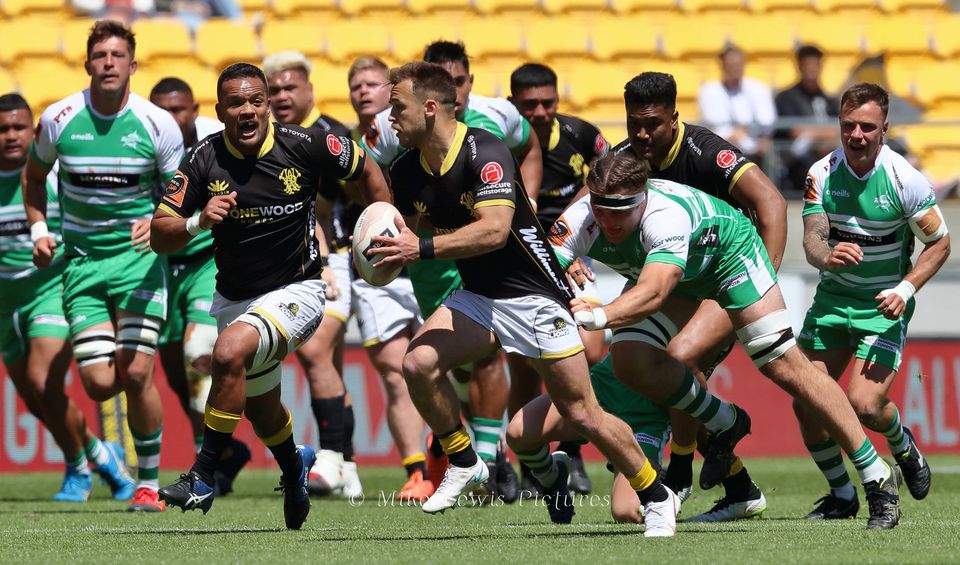 The Wellington Lions avoided relegation with a 31-5 win over Manawatu on Saturday. But a 5-5 record and sixth place finish in the seven-team Premiership represents a disappointing season. Reversing an extra time loss to Canterbury would have seen them in contention to win the title but ultimately periods of inconsistency were all too frequent. Wellington had a front row injury crisis which exposed a soft underbelly. This was most evident in the losses to Otago, Hawke’s Bay and Tasman. In saying that, rookie hooker Tyrone Thompson made giant strides, Naitoa Ah Kuoi continued to grow in stature at lock and flanker Caleb Delaney earned growing minutes. James Blackwell is an honest and valuable grafter who deservedly captained his province.

The back division was largely underwhelming, often because the forwards were going backwards. The backs combined to score just 21 tries in 10 games. Neither halfback established themselves as an undisputed starter. Jackson Garden-Bachop and Vince Aso failed to recapture their fine Super Rugby form and while Julian Savea tried hard he didn’t write headlines. The best back was possibly Wes Goosen. The best performing back is Salasi Rayasi (12 tries), but he plays for Auckland.

Prop Ofa Tuungafasi, who was suspended for three matches after the Brisbane Test, together with loose forward Du’Plessis Kirifi and midfielder Peter Umaga-Jensen, who both joined the All Blacks squad as replacement players, will return home today.

All Blacks Head Coach Ian Foster said: “Because of the unique challenges of the tournament, with a number of Test matches over consecutive weeks and the ever-changing world of Covid-19 quarantining, we brought a bigger squad than normal to Australia. But we had always intended to send a few players back at this stage of the tournament, based on whether or not we had injuries.

“The advantage for the three players heading home is that they will get an extra two weeks of pre-season training and return to their Super Rugby clubs early. It also means we aren’t compromising our own preparation in the build-up for what will be a very important final Test of the year for us.”

Two weeks of quarantine of course, so they couldn’t play for Wellington if they had made the semis.
+++++

Possible negative rugby news coming this week following an incident in the Petone -Marist St Pat’s match on Saturday. We will leave it at that here, except to state it is Wellington Rugby’s community awards on Tuesday night so perhaps no updates until they are done.

Word on the street at Maidstone Park on Saturday was that the annual Village Kings tournament is going ahead on 12 December. We await more news of that. Other than that, Wellington region rugby fans can look forward to an extended break to regroup and recalibrate after a long year.

Few saw the Pumas victory over the All Blacks coming, but an examination of the Jaguars results in Super Rugby reveals the Argentinian outfit has been consistently competitive against Kiwi opposition. The Jaguares complete record in Super Rugby since their inception in 2016 is 36 wins in 68 games. Significantly at the end of four completed seasons they have improved the number of wins achieved in each season. The Jaguares record against New Zealand opposition is five wins in 13 games. The Jaguares lost to three New Zealand sides in their first season and then avoided Kiwi opposition in 2017. Their first win against a New Zealand side was in 2018 when they beat the Blues 20-13 at Eden Park. They followed that result with a 23-19 success against the Chiefs in Hamilton a week later. Half of the Jaguares losses to Kiwi sides have been by eight points or less and in 2019 they made the Super final and competed bravely against the Crusaders in Christchurch.

Nicolas Sanchez scored all 25 points for the Pumas in their win against the All Blacks. His haul passed the 21 points scored by Hugo Porta in a 21-21 draw in 1985. However his total was only 23rd on the all-time Pumas list. Eduardo Morgan holds the record for most points in a test match for Argentina. He scored 50 points in a 98-3 slaying of Paraguay in 1973. Felipe Contepomi scored 31 points against France in 2010, the best effort against a regular top nation.

Morne Steyn holds the record for the most points against the All Blacks in a test with 31 in 2009. He scored all the Springboks points in that match.

Some Pumas players haven’t seen their families since August while they will have been away from home for more than two months by the time the Tri-Nations ends in December. The All Blacks were complaining about missing Christmas. Might say something about the respective desire of the teams.

Argentina have won 228 of 451 tests and have now beaten every country in the Six Nations and Rugby Championship at least once. In 1997 they were beaten 93-8 by the All Blacks at Athletic Park, Wellington. Later that year, with coaching from former All Black Alex ‘Grizz’ Wyllie, they beat Australia 18-16, a humiliation that John Eales identified as key in helping the Wallabies build a World Cup winning culture in 1999. Argentina was third at the 2007 World Cup and fourth in 2015.

Congrats to @BOPRugby halfback Luke Campbell for signing with @Hurricanesrugby

One of only two journalists to have covered every Rugby World Cup since 1987, veteran Australian rugby writer Greg Growden has died, age 60.

Growden passed away on Saturday night at Sydney’s Royal Prince Alfred’s Lighthouse facility after a long struggle with cancer.

An iconic rugby journalist, Growden wrote for the Sydney Morning Herald for six decades, from the late 1970s when he joined the paper as a cadet, through to this decade – with a long stint at ESPN thrown in.

James Lowe continued his remarkable run of scoring on debut, having dotted down in his first outings for the Chiefs, New Zealand Māori, Leinster and now Ireland in their 32-9 win over Wales. At the age of 15, Lowe contracted a severe rash and within a couple of weeks, he was left bedridden and in deep pain having been diagnosed with rheumatoid arthritis, a long-term autoimmune disorder that primarily affects joints.

England have secured top spot in the Women’s World Rugby Rankings after a 33-10 victory over France in Grenoble. It is the first time England have been ranked as the best team in the world since August 2017, when the Black Ferns leapfrogged them during their World Cup-winning campaign.

Meanwhile the Black Ferns played their first match in 15 months, defeating a Barbarians selection 34-15, outscoring their opponents six tries to two. The win was highlighted by two tries to debutant Langi Veainu. Playing her NPC rugby for Waikato she comes from a family of six brothers and four sisters, including an older brother, Telusa Veainu who played for the Highlanders, Crusaders, and Rebels in Super Rugby before going to play for Leicester in the English Premiership. The former Kiwi Fern missed selection for the 2017 World Cup and concedes she entered a period of depression. Now working with the Graeme Dingle Foundation’s ‘Kiwi Can’ programme which works with primary to intermediate school children, teaching values like respect, integrity and resilience she has her own daughter Laukuonga which means Rock of Ages. Cheyelle Robins-Reti, a NZ Sevens rep, also scored on debut.

The Māori All Blacks v Moana Pasifika match will bring culture, connection and entertainment the Waikato on Saturday, 5 December.

The match brings together the Māori All Blacks for the only time in 2020 and will mark their first match in Hamilton since playing Samoa during the 2008 Pacific Nations Cup. It will also be the first time a team has played under the Moana Pasifika banner.

New Zealand Rugby say they are “incredibly disappointed” with All Blacks star Ardie Savea’s insistence on not wearing a mouthguard, and acknowledge they need to take serious action against “repeat offenders”.

Stuff reported three weeks ago that the NZ Rugby general manager of professional rugby and performance, Chris Lendrum, was “aware of the issue and will be working through it with all our players” after Savea could be seen with top teeth uncovered during the Bledisloe Cup test in Auckland, breaking the NZ Rugby players’ collective agreement.

While wearing a mouthguard is not part of World Rugby’s laws, they were made compulsory at under-19 level and below in New Zealand in 1997, then at the provincial level in 1998, and about 15 years ago the directive was introduced for all players, understood to be to aid player safety, guard against potential medical costs, and set a good example to junior players.

This caught Short Passes attention because just last week when going through photos from the opening leg of the American Ambassador’s 7s it was noted that a number of players were seemingly not wearing mouthguards. Of course, lots of players wear ‘clear’ mouthguards so hard to distinguish but they were definitely several players in multiple photos not wearing one.

Short Passes’ message to young players is to protect your teeth regardless of the rules and what your role models are or aren’t doing. This from someone who has their two front teeth either chipped or smashed four times between the ages of 10-22 and had multiple dental surgeries, the most recent one for an implant as recently as three years ago.