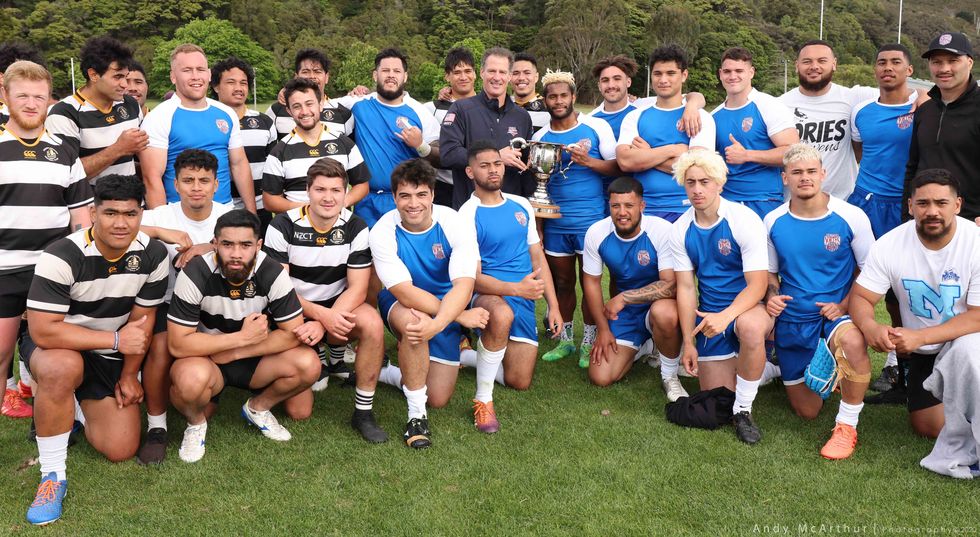 Both teams won their second consecutive tournaments this weekend at Maidstone Park to lift the trophies.

However, the final tournament of the year was marred by an unsavoury incident in the pool match between Marist St Pat’s and Petone.

Lush green grass and clear bright skies – a convivial atmosphere existed at Maidstone Park for the last mass gathering of an unusual season.

The final leg of the Ambassador Sevens series in Upper Hutt was ripe for enjoyment until the pool match between Petone and MSP.

So bad was the second-half fight in their match, MSP was disqualified from the tournament with three red cards and Petone, who also had a player red carded for a cumulative total of four reds for the match, refused to play on.

That was after a Petone player was accompanied to hospital with five teammates, the victim of an assault. Allegedly kicked on the ground, the player suffered a seizure during his beating and faces the prospect of grim injury and a long recovery.

The perpetrators’ sanction might be tougher than a mere judiciary visit.

The atmosphere was flat, shocked at such senseless behaviour.

Club Rugby wishes the player a speedy recovery and in no way endorses violence and anarchy. A zero tolerance approach must be taken by whichever authority deals with the aftermath of the incident.

Back to the rugby, the last and deciding Men’s match of the year was a sloppy affair, with Norths taking a 10-0 lead into halftime, courtesy of a Luca Rees intercept try and a second team try on the stroke of halftime.

Norths held the ascendancy for much of the opening period of the second spell, before Esi Komaisavai scooted up the far touchline to score and put them up 17-0.

Ories struck back with two quick tries but these were too little too late, and Norths will be going to the National Club Sevens at the end of January to try and win back that title off Ardmore Marist.

Previously in the two Cup semi-finals, Norths had blanked Old Boys University 22-0 in one match and Ories had taken down last year’s winners Hutt Old Boys Marist 26-5 in the other.

In the Women’s final, Ories comfortably beat MSP, preying on an error-ridden performance from the MSP side.

Ories opened the scoring early after an initial sweeping attacking movement, but their next two tries that put them up 17-0 followed on from MSP handling errors.

Maddie Feaunati raced away to score for MSP just before halftime, to cut Ories’ lead to 17-7 at the turnaround.

There was no stopping Ayesha Leti-L’iga early in the second half after another MSP mistake, while the final try of the match was the icing on the cake.

A combined Petone/Paremata-Plimmerton team beat Hutt Old Boys Marist 20-19 in the playoff for third in the Women’s tournament.

In other finals, Wainuiomata slashed their way through the home club Upper Hutt Rams 41-7 to win the Bowl final. Wainuiomata opened the scoring with a runaway try and Daniel Schrijvers replied for the Rams straightaway to make it 7-7. But the rest of the final was one-way traffic as Wainuiomata ran rampant. Josh Robertson-Weepu was particularly strong on the counterattack.

OBU and HOBM agreed to share third place and not contest the Plate final.

Stokes Valley were deserved 20-10 winners of the Boot final over the Wellington Axemen.

Thus concludes club rugby in Wellington for 2020, although the Wellington Lions may yet have a NPC Premiership semi-final (pending the remainder of the round this weekend) and it is understood that the WSRU Village Kings tournament will be played on 12 December (details to be confirmed).