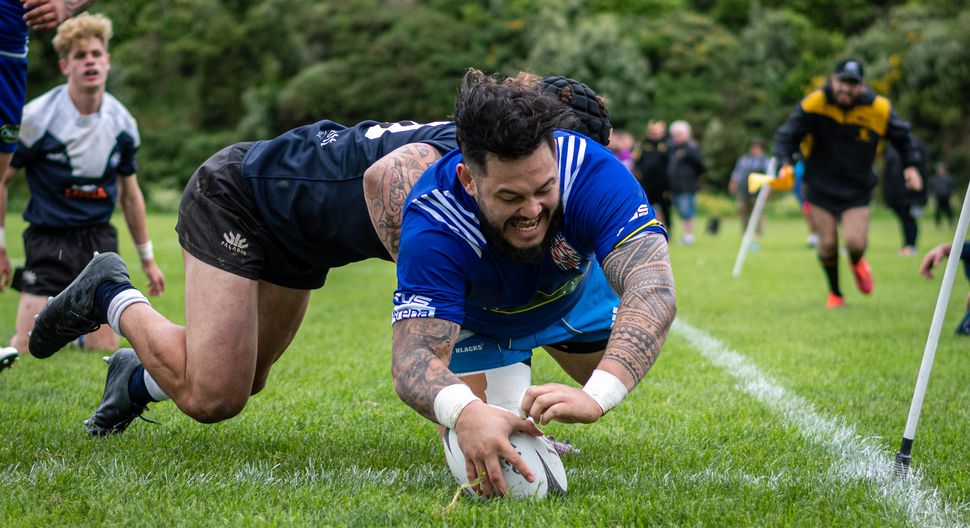 Luca Rees scores in the corner for Norths in their 43-0 semi-final win over Petone on Saturday. They were met with sterner opposition in Ories in the final, winning 15-14. Photo: Tom Minton.

Midday edition: Just one more weekend of rugby in Wellington to bring the curtain down on a long, often stressful and bizarre year.

Weather permitting, the concluding leg of the American Ambasssador’s Sevens tournament is on Saturday at Maidstone Park. More details of this tournament later this week – hopefully the same clubs and some of the others will line up for this.

At the same time, the Wellington Lions host the Manawatu Turbos for the Coron

ation Cup in their final National Provincial Championship round-robin match of the year, and likely their final match of 2020.

A loss to Hawke’s Bay on Sunday and a seemingly stunning form reversal by both Canterbury and Tasman that saw the previously struggling Cantabs blank their high flying Crusaders partners 29-0, has meant the Lions have an outside chance only of finishing fourth and playing another week.

Assuming they beat Manawatu, they will then have to rely on Auckland beating Canterbury and for Bay of Plenty and most probably for North Harbour to draw their match. Even then, bonus points might squeeze them out.

More importantly, they need to avoid relegation. To do that, they will need to beat Manawatu, preferably with a bonus point, and they should be safe. But they could lose to Manawatu and Canterbury could beat Auckland and then they could be gone and at that point the union should start talking about going down the Heartland Championship route for Wellington in the future.

On Saturday, Higgins made his debut for Norths in the 7s, below:

Congratulations to Auckland’s Eden Lizards for winning the National U85kg Club Championships, beating Auckland University in the final. This was the club’s second (actually third because they defended it the next year) major national title in recent years, following their National Club Sevens win in 2017. Club Rugby looks forward to supporting this competition next year.

On the subject of Auckland, their NPC team held on to beat Northland 24-20 playing with 14 players for 65 minutes, after both hookers, Soane Vikena and Northern United’s Leni Apisai, succumbed to injuries.

On the left wing, HOBM’s Salesi Rayasi scored another two tries, to take his tally for the 2020 NPC season to 10.

Sam Whitelock became the 23rd player in international rugby to start 100 tests. Richie McCaw holds the record with 141 starts. Frenchman Philippe Sella was the first player to reach the landmark of 100 tests, reaching that milestone in a 22-8 win against the All Blacks in 1994 (the occasion of Jonah Lomu’s test debut). Sella only played one test off the bench and that was against Zimbabwe at the 1987 World Cup. Florin Vlaicu has 99 starts for Romania. He has played 124 times overall and scored 992 points for Romania sixth on the all-time list for most points in international rugby history.

Australia flipped a 43-5 loss the previous Saturday to win 24-22 in Brisbane. Is that a bigger comeback than Joe Biden?

Who remembers 1999? The All Blacks beat France 54-7 at Athletic Park and lost the World Cup semi-final to the same opponent 43-31 in London. A similar thing happened in 2007. France was beaten 61-10 in Wellington and then beat the All Blacks 20-18 in the World Cup quarter-final in Cardiff.

The All Blacks double playmaker system has effectively been in place for the last 13 tests. There have been two draws and three defeats in that period.

The last time Australia beat New Zealand when all the players remained on the field was in 2017 in Brisbane. The score was 23-18.

There have been 200 red cards in test rugby. Since the 10th of August the tally has gone up 23.

New Zealand’s Cyril Brownlie was the first player to be sent off in an international match back in 1925. Huw Richards from Wales received the first red card at a Rugby World Cup. South Africa’s Andre Venter received the first red card in a tri-nations match. Four players have been sent off twice in their international careers. Uruguay’s Mario Cagnani, Samoa’s Alesana Tuilagi, Brazil’s Jonatas Santos Paulo and the United States’ Paul Emerick share that dubious honour.

The most red cards in any international match was three in the spiteful South Africa v Canada 1995 World Cup match. The most cards in any test is the seven yellow and one red card dished out in the 2004 Intercontinental Cup match between Uruguay and Georgia. Uruguay won the game 17-7. The referee was M. Toscano from Argentina. A quick search of the ESPN StatsGuru engine does not produce a first name or birth date for the referee.

Ridiculous behaviour from Sona Taumalolo towards the end of the Ranfurly Shield match between Hawke’s Bay and Wellington yesterday. The 38-year-old reserve prop, capped 20 times by Tonga, came on the field and smudged Tyrone Thompson’s face in the ground after a tackle. Then he threw a couple of haymakers before starting another fight after the full-time whistle. He then refused to shake hands with the Wellington players gesturing to the crowd as he departed.

Good to see Geoff Cridge back in strong form at lock for Hawke’s Bay. He’s two metres tall, athletic, and abrasive. He’s suffered a shocking run with injuries but he might be positioned to give the Hurricanes another nudge on present form.

The matchday experience at McLean Park is excellent. Close to the field, relatively affordable food, and drink and a hearty home crowd. The corporate boxes were brimming and the kids free to roam on the embankment. Despite the 12 degree drop in temperature during the game (it went from 28 to 16) McLean Park is a good afternoon out.

Leinster are on a remarkable run in the PRO14. They have won their last 24 matches on the trot.

South Africa has recommitted to the Rugby Championship until 2030. SANZAR has announced they are launching a rebrand in 2021. It’s sorely needed.

Ratings for all the major sports leagues in the US are down and Wednesday’s first State of Origin match recorded a 17-year rating low. Is the same thing happening in rugby? The virus, crowd restrictions, and more urgent priorities are at the forefront of people’s minds right now.

Four players from the 2019 Wellington Under-19 selection came off the bench in yesterday’s loss to Hawke’s Bay. Are the Lions simply too young in 2020?

Tasman was blanked for the first time since Round 1 2017. That was also against Canterbury 39-0. It was the first time in 42 matches Tasman failed to score a try.

The Upper Hutt Rams wore black arm bands on Saturday in support of David Painter who passed away early last week. Paints would have been proud of his Rams on Saturday, the former three-time American Ambassador’s Sevens champions winning the Shield after not fielding a team at all last year and in rebuilding mode.

Three of Wellington’s female referees all celebrated their birthdays on Friday – with Cath Hambly, Natarsha Ganley and Monique Dalley all rolling over another year of life. The former two backed up on Saturday with shifts at the 7s at Onepoto Park.

Nehe Milner-Scudder also played his 50th match for the Manawatu Turbos on Sunday.

Hawke’s Bay captain and hooker Ash Dixon played his 250th first-class match for the Magpies in their win over the Lions.

Short Passes understands that three as yet to be revealed leading Wellington club rugby players are heading to Otago in 2021 to link up with the Harbour club.

All three were involved in Saturday’s sevens, so a possible swansong in their Wellington club colours coming up this coming Saturday at Maidstone Park.

Former Highlanders head coach Aaron Mauger is going back to the grassroots. Mauger has been named as the Kaikorai club’s coaching adviser for next season. The job will involve assisting with the coaching of coaches as well as supporting the player development programme

Below: The last play of Saturday’s American Ambassador’s Sevens Final, with the try-saving tackle in the corner by the six-man Norths side with a player in the bin and the relieving penalty. Norths held on to beat Ories 15-14.

Photos: Visit our photos website for dozens of photo galleries from this year HERE