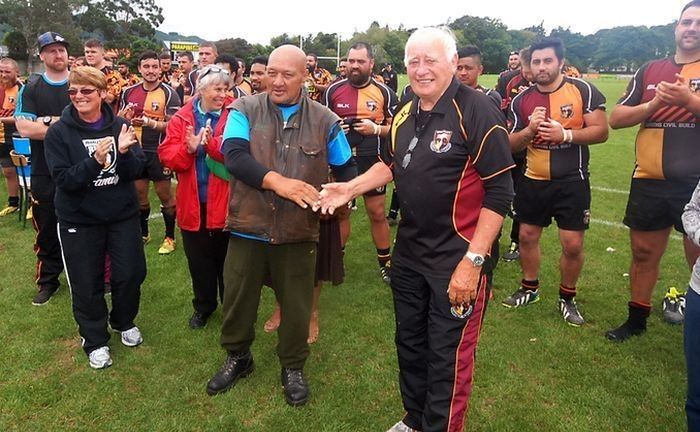 Above: George Hinaki (left) and Dave Painter at Maidstone Park in March 2017 after the grandstand was renamed after them. Photo credit: Peter McDonald.

UPDATED: Club Rugby was saddened today to hear of the passing of David ‘Paints’ Painter.

Paints had been a stalwart of the Upper Hutt Rugby Football Club since the mid 1970s and was integral in the recent merger between Upper Hutt and Rimutaka to form the Upper Hutt Rams. Outside the club, he was a well known identity in Wellington club and representative rugby and Wellington cricket for many years.

He is survived by his wife Meryl, twins Stephanie (married to Wallabies coach Dave Rennie) and Lynley, and younger daughter Hayley, and he has several Grandchildren. He was 79.

The club celebrated his birthday with a surprise “this is your life” at the club a couple of years ago.

Paints touched a lot of people in his lifetime with all he accomplished. He didn’t tolerate ‘fools or idiots’, but if you treated him well then you had a friend for life. He often took young players under his wing, while he was responsible for keeping many older players on the field with his magic rub downs.

The following is a republishing of the story we did with Paints the week after he was honoured, along with his good friend George Hinaki, to have the Maidstone Park stand named after him in March 2017.

As it has been every match-day for the past three decades, Saturday was shaping up to be another busy afternoon at the club for Upper Hutt Rams’ Premier team masseuse and strapper Dave Painter.

Pulling into the carpark ahead of the first home match of the new season for the Rams’ Premier and Premier Reserve sides and then throughout the curtain-raiser match, he had no inkling of what was to come. “It was an absolute surprise, I didn’t know anything about it,” he said. “I got asked to go and stand on the field between the two matches and George and our respective families were out there too and then they announced it.”

A cover that was hanging over the entrance to the players’ tunnel was lifted revealing the words ‘The Painter-Hinaki Grandstand’, named after Dave Painter and George Hinaki, stalwarts of the former Upper Hutt and Rimutaka clubs and, since 2014 following the merger of the two clubs, the Upper Hutt Rams.

“I turned around and said to George, you better pinch yourself, because they only name buildings in your name after you’re dead!

“It was a complete surprise, and we both felt very humbled.”

Both Painter and Hinaki have played big roles in bringing the two clubs together. “I remember saying five years ago to George when we went up to play them what are we doing beating each other up when we should be joining together and beating the town clubs up.”

“It wasn’t an easy job merging Upper Hutt and Rimutaka. “There’s been a lot of feeling and they were 30 years on their own and proud. But I can honestly say that the atmosphere and the camaraderie at the club on Saturday was outstanding and the place feels like home now.”

Painter has been involved with Upper Hutt and now the Rams for 35 years. In that time he’s managed several teams, including the Premiers, and coached Colts and age-grade teams. This led to him doing some courses in massage therapy and moving into his current role.

“Along the way I picked up Wellington rugby representative teams and also other sports such as cricket.” He spent 10 years with the Wellington Firebirds cricket team until recently.

He explained that Upper Hutt’s two Swindale Shield wins in 1990 and 2005 have been obvious rugby highlights. “We haven’t won much silverware but I think a highlight for me would be bringing the two clubs back together again. The city is too small for two Premier sides and it meant we were digging in the same bucket for the same support, now it’s a lot easier. Rimutaka have brought a tremendous culture with them and the whole thing has gelled together well.”

Painter said it’s been a privilege watching players such as Cory Jane come through the ranks and go on to bigger things. “Cory came through the system, he played for Rimutaka when he was a kid, then he went to Stokes Valley and then came back to Upper Hutt. He is like a beacon – what we have done in bringing the clubs back together is to try and give pathways that they can emulate Cory, and others before him like Marty Berry and Dave Rennie, and be noticed and go on for bigger and brighter things.”

“It’s about doing something for our youth and making they have got a pathway for them to be noticed.”

Painter spent 34 years with the police force. He was on the front line during the controversial 1981 Springbok tour.

“I was standing on the bank when they came through the wire at Hamilton. I was standing there trying to get contact with control and tell them what was happening and next thing 300 people came rushing past me and went and stood in the middle of the park.” The match against Waikato was abandoned.