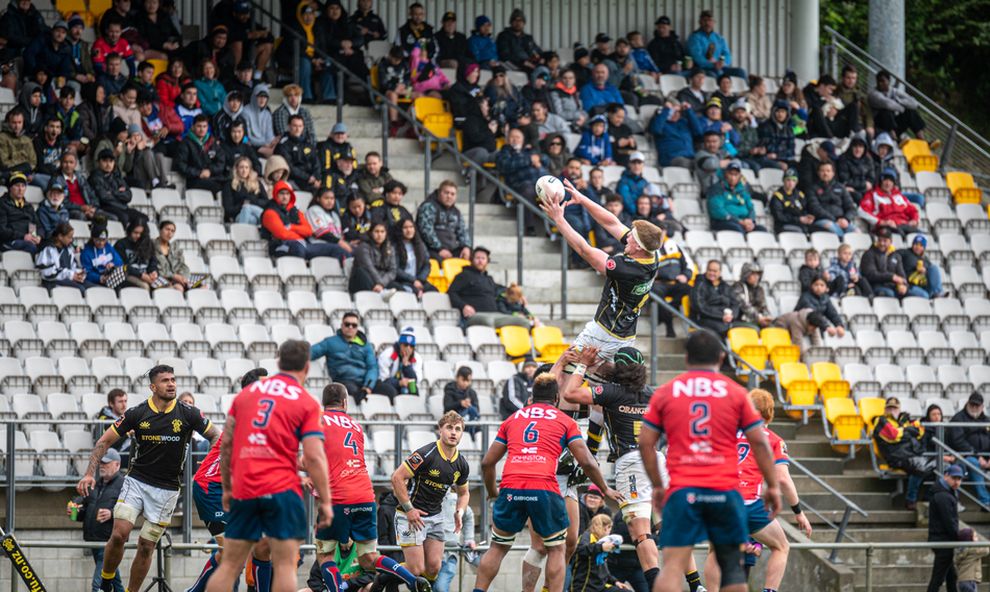 Above: James Blackwell takes the lineout in his 50th game for the Wellington Lions, in front of a sparse crowd on a bleak afternoon at Porirua Park. PHOTO: Tom Minton.

Updated: Where to now for the Wellington Lions after their 3-19 loss to the Tasman Mako on Saturday at Jerry Collins Stadium?

To Napier to challenge for the Ranfurly Shield, that’s where.

They play the Hawke’s Bay Magpies on Sunday in a rare challenge, and for their first chance to bring the Ranfurly Shield home for the first time since 2009. More details later in the week.

In local rugby, the focus is on sevens this coming Saturday, with the first of two legs of the scheduled American Ambassador’s Sevens tournament hosted by the WRFU at Onepoto Domain, Titahi Bay.

The two-tournament series is scheduled for 7 November at Onepoto and 14 November at Maidstone Park, Upper Hutt, with 21 November a reserve day in case of a washout.

More details to come later this week, but as of the start of this past Sunday some six women’s teams and 11 men’s teams (representing nine clubs) had indicated their entry. This is expected to grow, for example no Norths team was on either the men’s and women’s list.

There were few highlights from Saturday’s game, which was played in cloudy, blustery conditions.

When was the last time that the Wellington Lions failed to score a try in a NPC match?

What was wetter at Jerry Collins Stadium? The Wellington forwards or the largely unoccupied corporate hospitality tables at the Mungavin Street end?

The North’s 100 club formed a tunnel to greet the arrival of the Wellington Lions. With green armbands on they could drink discounted beer at their place. Was it necessary to charge such genuine and fun-loving fans at all? They didn’t charge the V.I.P. folk some of whom have properly never been to a rugby match in Porirua.

+++++
Xavier “Usher” Numua has no occupation but Vince Aso is a rugby player who took a selfie in the toilet? What happened to match programmes?

The two Wellington U85kg teams in Saturday’s National U85kg semi-finals both bowed out on Saturday.

Avalon lost to Auckland University 30-11, while Eastbourne lost to the Eden Lizards 29-3. The final is this coming Saturday at Eden Park in Auckland (not far from the Lizards’ lair in nearby Sandringham).

The run of play at a windy Evans Bay Park was much closer than the 29-3 scoreline suggested, with Eastbourne giving another good account of themselves. Eden had six current Premier players in their 22, while Eastbourne had one (Petone’s Jack Coles at No. 8), and Eden were clearly the more threatening side with a superior set-piece and obvious strikepower out wide. But in some facets they were very sloppy in the first half and for much of the second half, making numerous handling errors and conceding a slew of penalties (eventually leading to a yellow card).

Scores were locked up at 0-0 with almost half an hour played, before Eastbourne got on the board with a penalty with virtually their first raid up field into Eden’s 22 at the Kilbirnie Park end of the ground. But Eden struck with two quick tries right before halftime and led 12-3. Eastbourne dominated play for a while in the second spell but couldn’t break through. Eden came back to score their third try to lead 17-3 and at that point it was game over. The score blew out a bit at the end with two more late Eden tries.

The All Blacks secured a crucial four-try bonus point in the Rugby Championship by halftime.

81:20-ish: Classic commentary by Grant Nisbett – “Hooper up for another losing interview.” He made a strong carry close to the All Blacks line at 43-5.

Australia’s 43-5 loss is the biggest ever losing margin in a Bledisloe match, beating a 43-6 Wallabies loss in Wellington in 1996. In fact, it’s the biggest margin in the history of Trans-Tasman rugby matches, dating back 117 years and 168 matches to 1903.

What was wider? The moustache of Karl Tu’inukuafe or his left foot side step that made Nick White stumble before the first try of the test was scored?

Did the Wallabies really think that six tests between Noah Lolesio, Ira Simone and Jordan Petaia in the viral positions of 10,12 and 13 was going to be a winning formula against the All Blacks? Lolesio and Petaia are still young enough to be Colts internationals. Australia are still a mile behind.

Southland had four players on debut on Sunday against Manawatu in their bottom of the table clash – all coming off the bench. That’s a lot of debutants in one line-up in first-class rugby midway through the season.

Manawatu won the match, which was played in Feilding and not Palmerston North owing to a speedway event, 24-12. This was Southland’s 28th straight away loss in the NPC.

A hat-trick for Hutt Old Boys Marist wing Salesi Rayasi on Saturday for Auckland in their 31-10 win over Waikato. Rayasi is now the outright leading try-scorer of the NPC competition with eight tries, and has scored nine tries in his previous five outings for Auckland. He is on track to win the Wellington Player of the Year award.

England won the Six Nations for the 39th time but the big story post the first European lockdown is France. A convincing win over Ireland to finish followed a 38-21 thrashing of Wales last weekend. The French team contains many players of the recent World Under-20 winning vintage.

Alun Wyn Jones became the most capped player of all time when he played his 149th test for Wales against Scotland. Scotland won the match 14-10 which means Wyn Jones has now lost more tests 74 than he has won 73. He has been a part of two draws.

Canterbury won the Farah Palmer Cup for a fourth consecutive year with an 8-7 win over Waikato. It’s the lowest scoring women’s NPC final on record since 1999 and Waikato’s second loss in a decider after a 28-14 defeat to Auckland in New Plymouth in 2014. Canterbury’s overall record in finals is four wins and six defeats.

Cindy Nelles, who scored the 81st minute try to win the Farah Palmer Cup final for Canterbury, is a very impressive woman. The Canadian international played in the 2017 World Cup and is a civil engineer whose been part of the Canterbury team since 2019. She scored a try in the semi-final too. A World Rugby Level 1 qualified coach, she is also a longtime referee.

Kendra Cocksedge was the leading points scorer in the Farah Palmer Cup with 78 points. Her biggest haul in a single game was 22 against Wellington. Kendra holds every single individual points scoring record for Canterbury and here are some of her achievements:

+++++
The US Presidential elections are this week. When England played USA in the World Cup last year head coach Eddie Jones said prior to the match: “Facing USA will be like facing 15 Donald Trumps. They will come out all guns blazing.”

In 2016 Joe Biden visited New Zealand as Vice President and was introduced to All Blacks at the Langham Hotel in Auckland. Jerome Kaino and Charlie Faumuina gifted Biden a signed All Blacks jersey with his name and the number 15 on the back.

Happy Birthday this week to Petone Prems manager and good buggar Ezra Iupeli. The Scots old boy tells many cracking yarns but the best might be the time he played for the Scots College First XV against Paraparaumu College and Christian Cullen scored six tries

“POKIE” FUNDING IN THE SPOTLIGHT AS COUNCIL REVIEWS POLICY

From Sunday’s edition of New Zealand Amateur Sport Association Inc‘s ‘For the Love of the Game’ email newsletter:

“Class 4” gaming funds are an important source of revenue for many sporting organisations nationally. As many readers will know, Class 4 gambling refers to non-casino gaming machines, more commonly known as “pokies”. In New Zealand, a significant proportion of the money gamblers lose is legally required to be distributed to community groups, through grants. Sports organisations account for around one-half of the total value of grants made annually.

Wellington City Council is proposing to adopt a “sinking-lid policy” for Class 4 gambling, which allows no new venues or gaming machines in Wellington, in an effort to limit the social harm created through their use. In inviting submissions on the policy, the Council proposes that sports organisations “look at more ethical and sustainable funding arrangements.”

Of the sports that have provided submissions on the proposed policy, Wellington Hockey has requested that the new policy not be implemented, noting that while “the impact of problem gambling can be significant in the community, we also believe that the social benefits of sport and the people that we can impact cannot be underestimated. We see, on a daily basis, the importance of sport to people’s health and well-being and want to be able to keep providing this to our community without any more financial pressure than we already experience.

Short Passes also accepts that “pokie” gambling is harmful and can be ruinous to some users, but what would the impact be on Wellington’s rugby clubs if this source of revenue dried up with no viable consistent funding alternative to match?

Concerns over social distancing measures prompted police and public health officials to temporarily halt proceedings in the opening half of the Shute Shield final between Gordon and Eastwood in Sydney on Saturday.

Eastwood were up 5-3 after 15 minutes of the Sydney club championship at Leichhardt Oval when play was stopped after the officials found some supporters getting too close to each other on Wayne Pearce Hill on the eastern side of the ground, the Sydney Morning Herald reported.

“We need people on the hill to start spreading apart. A COVID marshal has paused the game,” the Sydney Morning Herald quoted an announcer as telling the crowd of 5,000.

“This is under strict guidelines from New South South Health. We do need to spread out on the hill otherwise we can’t continue the game. Help us out here please.”

Enjoy your knees while you still can lads: