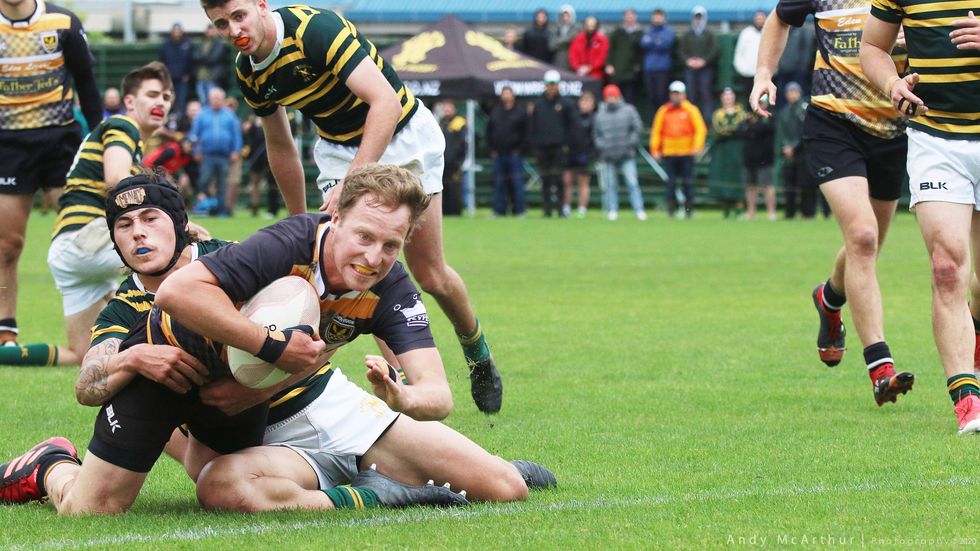 The NZ Barbarian Under 85 Club Cup decider will be an all-Auckland final at Eden Park next Saturday between local clubs Eden and Auckland University, after winning their semi-finals on Saturday against Wellington clubs.

Home team Auckland University Squids saw off the challenge of Wellington’s Avalon Wolves 30-11 in one semi-final, while visitors Eden won’t have far to travel to the final after beating Wellington’s Eastbourne 29-3 in their top four fixture.

That final will be the curtain-raiser to the National Provincial Championship match between Auckland and Northland and live on Sky Sport.

Late tries at the close of each half propelled the Eden Lizards to their five tries to nil, 29-3 win over Eastbourne in blustery conditions at Wellington’s Evans Bay Park.

Steady rain before kick-off, cleared to a mostly dry match, but both teams had to contend with a difficult wind, which, as many Wellington club and college players know on this ground, is more of a cross-wind than an end-to-end gale.

On their first visit to the Evans Bay, Eden made much of the running in the first half, but failed to take their chances inside Eastbourne’s 22, partly due to the wind, but mostly owing to their own handling errors, disruptive Eastbourne defence and a string of penalties conceded at the breakdown.

The visitors turned over possession whilst hot on attack on no fewer than six occasions in the opening 25 minutes and should have at least scored from an attacking 5-metre scrum in the 23rd minute, their best chance thus far.

From there Eastbourne rallied and won a penalty from a rare foray into Eden’s 22, which first five-eighth Jamie Fevre kicked to put them up 3-0.

However, the visitors would finally make hay, striking with two decisive tries immediately before halftime that put them up two tries to nil.

Unable to penetrate from close-range previously, they went the long distance route on both occasions.

From a ruck 40 metres out, halfback Tom Barker dashed through a gaping hole and up into Eastbourne’s 22 to within metres of the tryline. Quick recycling saw first five-eighth Ignacio Costa pop a pass to centre Matt Turner who crossed for the game’s first try and a 5-3 lead.

Eastbourne’s re-start failed to go 10 metres and Eden reloaded from an attacking scrum on halfway and fullback Rodrigo Costa – one of three Costa brothers on the field for Eden – made a telling break up into space and fed right wing John Toia on his outside who scored their second try in as many minutes. The conversion was successful, and after being 0-3 down, Eden went into halftime with a 12-3 lead.

Both teams lifted their intensity in the second half, Eden went close to scoring a third try early in the spell, before Eastbourne spent most of the next 20 minutes in the ascendancy but unable to break through to score.

A key moment occurred in the 60th minute when Eastbourne lock Patrick Jones and Eden left wing Max Leanna were both sent to the sin-bin for a spot of low level biffo near halfway.

Eden soon went up 17-3 with a try in the far-left corner following a penalty and lineout drive and a try on the blindside of the next ruck to replacement Tom Northcott.

Eastbourne weren’t done, swinging back on to attack but once more unable to break through, although Eden lost a second player to the sin-bin for cynical play and were briefly reduced to 13 players.

Instead it was the Lizards who went hot blooded, scoring another two quickfire tries that sealed the result in their favour.

In broken play, fullback Rodrigo Costa made space for himself with a jinking run and offloaded to right wing Josh Toia who chipped ahead and won the race to the line just inside the deadball line for a well taken try, his second of the match.