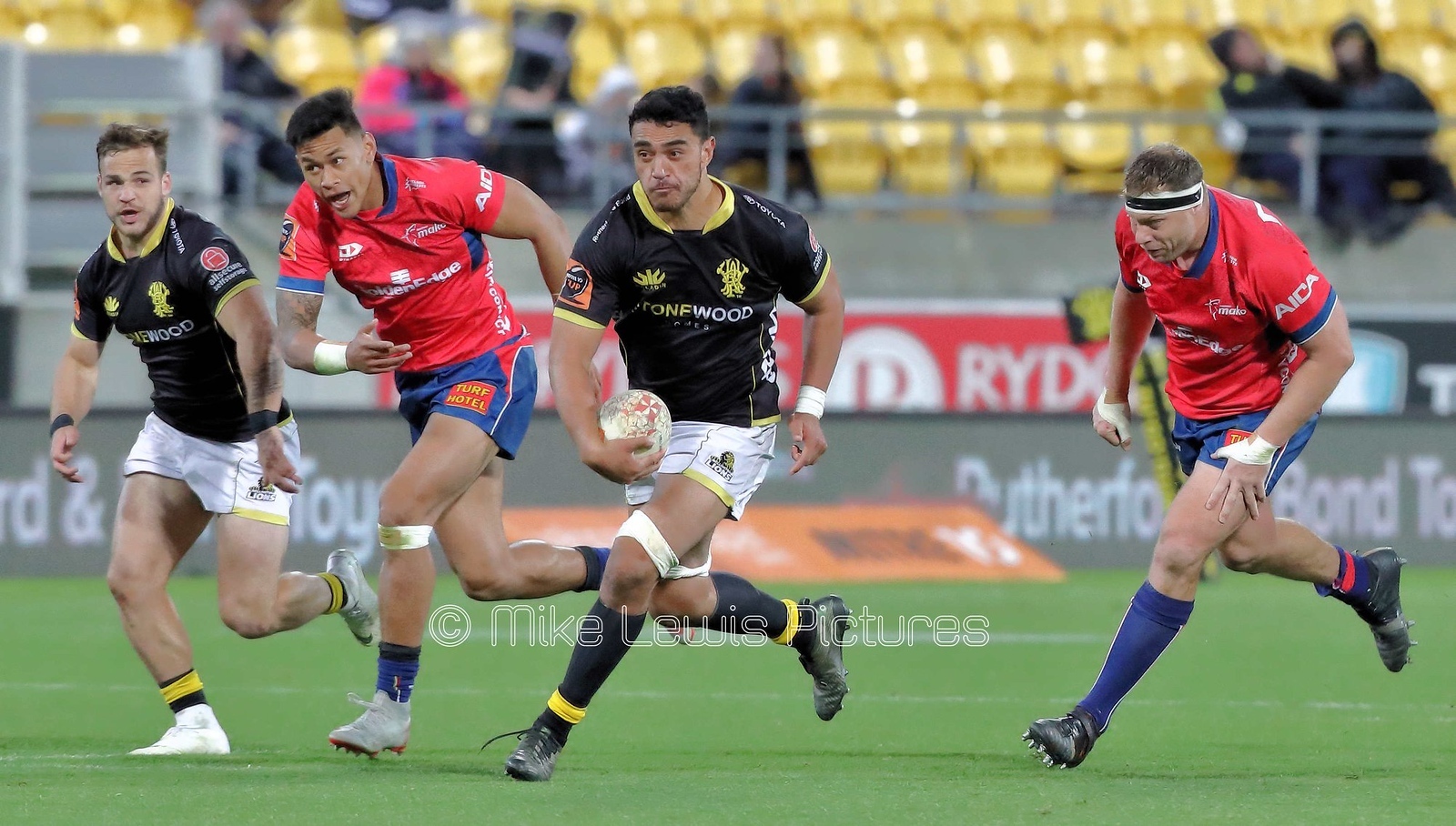 Above: The Lions last hosted the Mako two years ago, with the visitors winning 28-22.

Finally, the Wellington Lions are coming to the community, hosting the Tasman Mako at Jerry Collins Stadium on Saturday, kick-off 2.05pm.

It has taken the annual Food Show to shake them free from their two-decade home at Wellington Stadium and they will hope to dine out against the Mako in a top four Premiership clash that could go a long way towards deciding the make-up of the semi-finalists in three weeks.

Visitors and defending champions Tasman (on 25 points) are currently second behind leaders Waikato (27), followed by Auckland (25) and Wellington (24).

Wellington are coming off a swashbuckling 53-20 win over Counties Manukau and Tasman beat Southland 47-10 last start, so both will be fizzing to continue that form.

The two teams met twice last year, first in the opening week of the round-robin in Blenheim that saw the home side win 45-8 and second on the Premiership final that resulted in a 31-14 win for the first time champions Mako outfit.

Head-to-head, this is a relatively recent rivalry, The Lions have a shocking recent record against them that they will hope to change on Saturday.

The Lions won the first five clashes between 2006-2010, they then didn’t meet for three years in a row, before Tasman have won their last six matches since 2014.

The 2008 match was perhaps the most nail-biting of all 10 clashes thus far. The previous week the Lions had won the shield off Auckland (27-0) and then had to return home to see off a tricky challenge by Tasman in their one required defence of 2008.

This first defence in 26 years was on decidedly shaky ground when Mako halfback Kahn Fotuali’i dived across the tryline late in the second half to put his side ahead 13-11. Piri Weepu kicked a penalty that that saw the Lions regain the lead.

To the relief of many, the Lions were then able to pull clear with a 75th minute try to lock Jeremy Thrush to make it 21-13, followed by a popular match-winner to No.8 Thomas Waldrom to see them win 26-20.

Prior to 2006 when Marlborough and Nelson Bays formed to become Tasman, Wellington had played both unions on occasion down the years, last losing to Marlborough in 1974.

Wellington’s record against Tasman in the National Provincial Championship (NPC) competition is played 11, won five, lost six, and drawn none.

The results of those matches are:

Tasman was formed in 2006 from the amalgamation of the former Nelson Bays and Marlborough Unions. Tasman has won 54.8% of all the matches they have played.

Wellington’s record in all home matches is played 233, won 168 (72.1%), lost 61, and drawn four. Those home matches have been held at three different grounds:

Wellington is to play Tasman at the Jerry Collins Stadium in Porirua, a ground they have never previously played a NPC match on. They have, however, played other first-class matches there, the most recent one being against Taranaki on 9 August 2003. Wellington lost 17-27: Christian Cullen and Scott Waldrom each scored a try and David Holwell kicked two conversions and a penalty. Wellington and Taranaki had also met at Porirua two years earlier when Wellington prevailed 23-12.

In all NPC matches against Tasman, Wellington has aggregated 261 points made up of 31 tries, 20 conversions, 22 penalty goals, and no drop goals.

In all NPC matches against Wellington, Tasman has aggregated 314 points made up of 38 tries, 26 conversions, 23 penalty goals, and one drop goal.

Tasman’s 45-8 win in the Round Robin match at Blenheim last year was the first time Wellington failed to score double figures since losing 7-55 to Counties Manukau at Pukekohe on 27 September 2014. There were 49 matches played in between those two.

Wellington has scored four tries or better in NPC matches against Tasman on three occasions: in the first two matches played at Wellington (2006 and 2007) and at Blenheim in 2017.

Tasman has scored four tries or better in a NPC match against Wellington on five occasions: in their last six matches.

Neither side has failed to score at least one try against the other in all matches played to date.

Wellington’s record for most tries scored in a NPC match against Tasman is five, at Wellington in 2006, and at Blenheim in 2017.

Tasman’s record for most tries in a match against Wellington is seven, at Blenheim, in their Round Robin match in 2019.

Amazingly no Wellington player in a NPC match against Tasman has ever scored more than one try in a single match. A total of 24 players have dotted down at least once with Alex Fidow and Jeremy Thrush doing so on three separate occasions. Dane Coles, Tamati Ellison and Cory Jane have all scored two tries.

Wellington’s first match in 2019 was against Tasman as was their last: the Final. Wellington recorded just one try in each of those two matches and by coincidence they were both scored by Alex Fidow.

The record for most tries scored in a NPC match by a Tasman player against Wellington is two, by James Lowe at Wellington in 2014, by Leicester Fainga’anuku at Blenheim in 2019, and by Will Jordan at Nelson in the 2019 Final.

The record for most penalties in a NPC match by Wellington against Tasman is five, at Blenheim in 2009.

The record for most penalties in a NPC match by Tasman against Wellington is four, at Wellington in 2015 and in the 2019 Final at Nelson.

The record for most penalties kicked by a Wellington player in a NPC match against Tasman is four, by Jimmy Gopperth at Wellington in 2007.

The record for most penalties kicked in a NPC match by a Tasman player against Wellington is four, by Mitch Hunt at Nelson in the 2019 Final.

The most points scored by a Wellington player in a NPC match against Tasman is 18, by Jimmy Gopperth at Wellington in 2007.

The most points scored by a Tasman player in a NPC match against Wellington is 22, by Mitch Hunt at Blenheim in 2017.

The most points scored in all matches by a Wellington player against Tasman is 34 (one try, seven conversions and five penalties), by Jackson Garden-Bachop.

The most points scored in all matches by a Tasman player against Wellington is 56 (one try, 12 conversions and nine penalties), by Mitch Hunt.

The only drop goal kicked by a player from either side in this series was by James Foote for Tasman, at Wellington in 2007.

Of the total 565 minutes of playing time so far, Billy Proctor has played the most (552 minutes) closely followed by Jackson Garden-Bachop with 551 minutes and then James Blackwell with 545 minutes.

Two players will bring up 50 match appearances for Wellington if they both play against Tasman.

James Blackwell made his debut, off the bench, against Taranaki at New Plymouth on 15 August 2015. His record year-by-year is:

Blackwell has started the last 26 matches in succession. His try in 2017 was against Tasman.

Vaea Fifita made his debut, as a Lock, against North Harbour at Wellington on 28 August 2013.

The match between Wellington and Tasman will be the second of Week 8 and of all the NPC matches played since 1976 it will be Number 2650.

Just for fun here is a list of all those sides which have taken part in the top division of the National Provincial Championship since 1976. (The opening match of Week 8 between Canterbury and Otago is included in the total matches played).

Only Auckland, Canterbury, Otago and Wellington have been present in every one of the 45 years the Championship has been running.

Below: When Wellington and Tasman met in the NPC final last year:

Wellington and their opposition sides have together aggregated 21,983 points in all NPC matches
played since 1976. Wellington’s total is 12,399 points and their opponents 9584.

Wellington brought up 500 points in away matches against Counties Manukau. The total is
currently 501.

For the second match in a row at Pukekohe, Wellington has scored 53 points. In 2018 their score
was made up of eight tries, five conversions and one penalty. This year the points came from seven
tries, six conversions and two penalties.

Wellington’s two penalties in this match brought the number they have kicked in all NPC matches to
exactly 900.

Wellington was the only side in Week 7 to win their match away from home.

Wellington has scored 33 tries this year, second only to the 35 scored by Tasman.

Wellington scored seven tries against Counties Manukau, the 17th time it has done so against an
opposition side but the first time since their match against Otago at Dunedin in October 2012.

Wellington has conceded the most penalties (15), two more than Canterbury.

Counties Manukau’s loss was their third in four home matches played this year. It was also the
second time they had led a match at halftime and gone on to lose it.

After captaining Wellington for the previous 18 matches in succession, Du’Plessis Kirifi was
unavailable to lead the side against Counties Manukau and James Blackwell was promoted to the
top position. It was actually the second time he has been in charge: the first occasion was against
Hawke’s Bay at Wellington in September 2017, a match Wellington won 40-27.

Sam Smith made his first-class debut for Wellington. He is the ninth to do so in 2020 and brings the
number of players who have made at least one appearance this year to 34.

James Blackwell, Vaea Fifita, Jackson Garden-Bachop and Billy Proctor are the only players after
seven rounds to have started in every match. Teariki Ben-Nicholas and Tyrone Thompson have also
played in every match but some of their appearances were off the bench.

Out of a possible 565 minutes of playing time, Billy Proctor has been on the field for a total of 552
minutes followed very closely by Jackson Garden-Bachop on 551 minutes. Next is James Blackwell
with 545 minutes.

Jackson Garden-Bachop has scored 73 points so far in 2020 and is in second position on the point
scorers table, behind Bryn Gatland of North Harbour who has scored 87 points.

Garden-Bachop has kicked 22 conversions, second only to Tasman’s Mitch Hunt who has converted
23 tries.

Garden-Bachop also extended his run of consecutive match appearances to 57. He has not missed
a game since Wellington’s 22-22 draw with Hawke’s Bay in August 2015.

Aidan Morgan kicked two conversions, from two attempts: his first points for Wellington. He is also
just the second player to take a place kick this year after Garden-Bachop, who has taken all the
other kicks. The same thing happened last year. Garden-Bachop took all the kicks apart from the
match against Otago, in Wellington, when Trent Renata inherited the kicking duties and landed seven
of his eight conversion attempts. In that match Garden-Bachop appeared off the bench for a 21
minute cameo.

Mateaki Kafatolo started his first match of the season after coming off the bench for his previous
four appearances in 2020.

Connor Collins also started his first match of 2020 after having been a substitute in his five previous
games this year. It was just the second start in his 15 career appearances.

Both Vaea Fifita and James O’Reilly scored two tries in the match. For Fifita it was the third time he
had scored a brace. He had previously scored two against North Harbour at Albany in 2015 and two
against Counties Manukau in 2018.