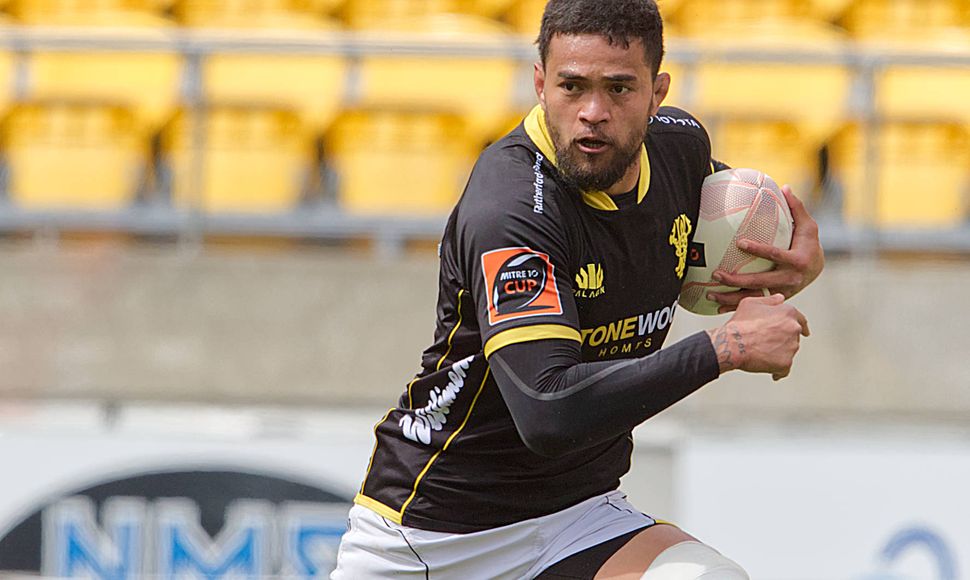 Above: The most expressive and effective performance from Vaea Fifita in a long time against Counties Manukau on Sunday. Two tries, a try assist, and always a threat.

Rugby today at Naenae College. The annual Condor 7s Wellington secondary school tournament runs all day, taking in some 33 teams across Senior Boys and Girls and U15s grades and across four fields. The Girls Cup final is at 4.20pm and the Boys Cup final is at 4.50pm.

NPC rugby this coming Saturday afternoon at Jerry Collins Stadium with the Wellington Lions hosting the Tasman Mako in round eight of the competition.

Short Passes would like to heartily congratulate the organsiers of the annual Wellington Food Show for their masterstroke in getting in early and re-scheduling their event this weekend at Wellington Stadium. In so doing, they have forced the transfer of this NPC game from the city venue to Porirua – a great outcome for the rugby community!

The NPC Premiership really tightened up this weekend with the lower ranked North Harbour defeating Auckland and Bay of Plenty thrashing Canterbury. Next weekend there are two top four clashes and a vital fixture between championship leaders Otago and Canterbury.

There is also the National U85kg Club Cup semi-finals this coming Saturday, with one semi-final in Wellington and the other in Auckland.

In Wellington, Eastbourne host the Eden Lizards from Auckland. This game is scheduled for Evans Bay Park at 12.00pm but Short Passes suspects it might change to Porirua and be the curtain-raiser for the Lions match.

In Auckland, local side the Auckland University Squids host the Avalon Wolves from Lower Hutt.

Hawke’s Bay retained the Ranfurly Shield with a blitzkreig-like 47-12 win over the misfiring Manawatu Turbos on Saturday.

This was the Magpies 17th straight win at home against Manawatu, going back to 1985.
It also means that the Wellington Lions have booked in a Ranfurly Shield challenge next weekend, following this weekend’s home match against the Tasman Mako at Porirua. This will be on Sunday 8 November at McLean Park.

Below: A spectacular try by Hawke’s Bay’s Danny Toala against Manawatu, running on to a Lincoln McClutchie cross-kick – a common occurrence when these guys were at school together at Hastings Boys’ High School as posted below from 2017 against Wellington College (McClutchie to wing Kini Naholo and on to Toala for the try).

You will have to go a LONG way to see a better try assist than this.

An entertaining curtain-raiser at the Latham St venue on Saturday, with Wanganui holding on to beat Poverty Bay 41-38 in a Heartland unions first-class clash. Wanganui led 31-12 at halftime and 41-12 after 50 minutes, before surviving a mighty comeback. For Wanganui, Petone halfback Logan Henry was on their bench.

Bay of Plenty smoked Canterbury 44-8 on Saturday – who saw that coming?

The win featured two tries to Hutt Old Boys Marist’s Chase Tiatia, In 36 matches against them going back to pre-world war two, this was the most points the Steamers have scored against Canterbury. Similarly, the 36-points conceded is the fourth most by Canterbury ever. Of course, Wellington’s 62 points scored against them two years ago is top of that list.

In contrast to their men’s team, the Canterbury Women’s side was on fire and beat the Auckland Storm 36-21, to advance to the Farah Palmer Cup final this coming Saturday.

Canterbury have won 19 Farah Palmer Cup games in a row and will clash with Waikato in the Women’s final. Canterbury have outscored Waikato 57 tries to 32, but the Southern Division has been the much weaker conference.

Liam Messam has had two man of the match awards in consecutive weeks for Waikato. The 36-year old former All Black scored a try against Taranaki to in a 27-20 win.

One in, one out of the Hurricanes next year.

TJ Perernara last week announcing his sabbatical to Japan next year, reiterating that this is just a gap year and he will be back

Former All Black and Hurricanes wing, Julian Savea, has signed with the Hurricanes for the 2021 season.

The 30-year-old returned from France earlier in the year and was called in as a replacement player during the closing weeks of Super Rugby Aotearoa.

Since then, Savea has been back with the Wellington Lions, playing NPC  and Hurricanes head coach, Jason Holland, says it’s “outstanding” to have his experience back in the capital. “Physically, Julian is in great shape and we know what a threat he can be. He is in a great place mentally and will add volumes to our environment on and off the field.

Savea is among the most capped and highest scoring Hurricanes in franchise history – tallying 121 appearances and 52 tries.

In the post-Covid environment in 2021, what is the point of Super Rugby?

Former New Zealand Rugby chairman Eddie Tonks died last week aged 85. Tonks served in the role between 1990 and 1995. He was also chairman of the International Rugby Board, now known as World Rugby. In 2004 he was made a life member of NZ Rugby. He played a key role in organising the first World Cup in 1987 and assisting in the game going professional in 1995. He also served as Deputy Chair of Wellington RFU from 1977 until 1989.

Another Wellington player making his debut for another province this past weekend, with 2018 St Pat’s Silverstream inside back Harrison Boyle coming off the bench for Otago against Northland.

After a 230 day break, international rugby resumed in the Northern Hemisphere when Ireland beat Italy 50-17 in the last match of Round 4 of the Six Nations. With the bonus point success Ireland are top of the table by a point heading into the last round. Debutant Hugo Keenan scored two tries on the wing. Keenan started all matches in the 2016 World Rugby under-20 Championship, including Ireland’s historic victory over New Zealand.

Last, but not least, today is the 20th anniversary since Wellington last won the NPC Division 1 [Premiership title].

Here it is here below: