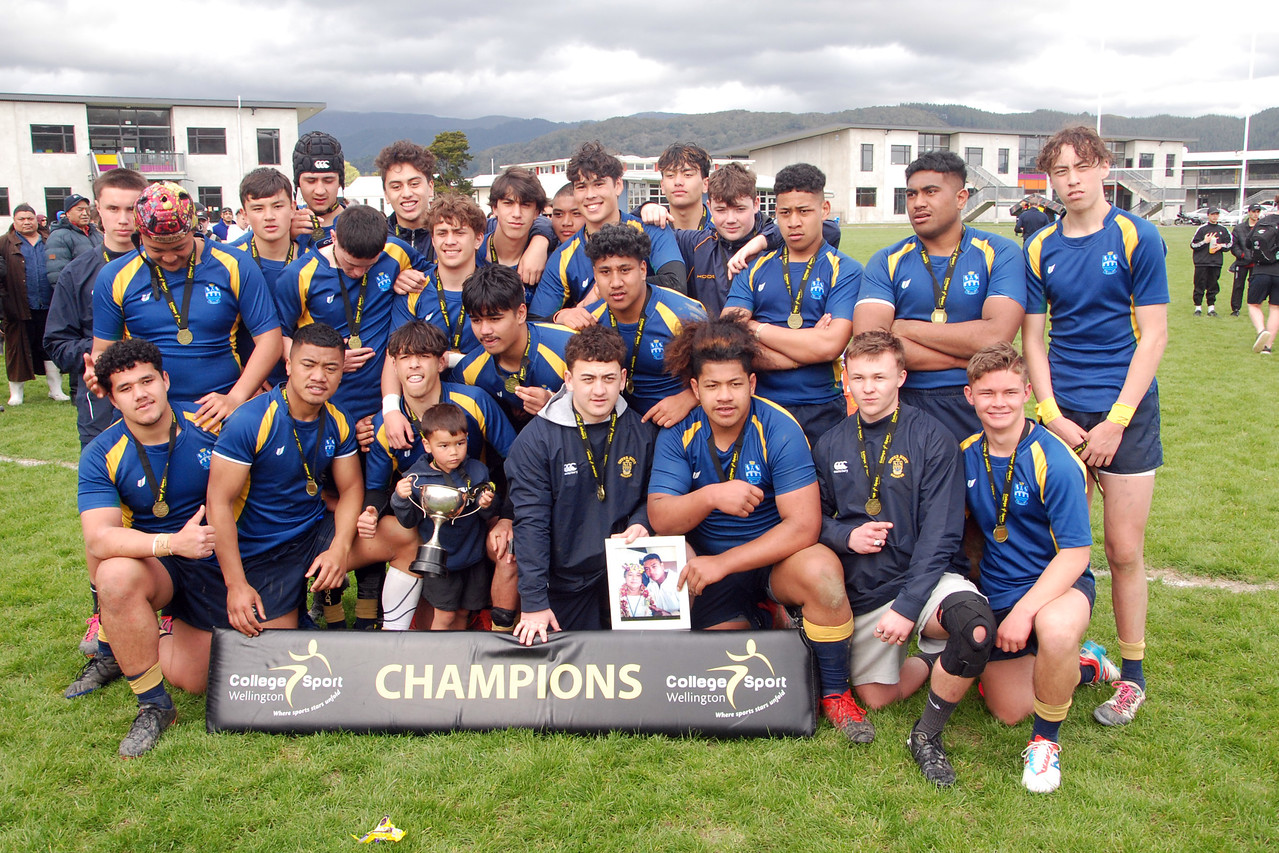 The Upper Hutt College side beat local rivals the St Pat’s Silverstream Second XV 22-10 in the final of the Murray Jensen Cup on the last Saturday prior to the school holidays.

The win completed not only an unbeaten competition season for the team, but one in which they gained the maximum 40 points from eight straight bonus point victories heading into the final.

This included big wins over teams such as the Wellington College Second XV (95-3), the St Pat’s Town Second XV (80-0) and Kapiti College (69-0). They also beat St Pat’s Silverstream Second XV 35-15 in their last match before meeting them again at the final at home.

But it was not always one-way traffic for Upper Hutt College, explained midfielder and co-captain Keisar Vailalo and hooker and forwards captain Joziah Eneliko.

“In the final we were down 10-0 at halftime. They got a try from a pick and go and then kicked a penalty, so it wasn’t the best way to start off the final,” said Keisar.

“We went into the final expecting a tough match, so we dug deep in the second half and turned it around.”

It was similar stories in the games against HIBS and Paraparaumu.

“HIBS were coming down from the Premiership and that was always going to be a tough game for us. They got two tries and led 14-0 after 10 minutes, but we finished the game strong and won 48-14.

“In our first competition game of the season against Paraparaumu, they got a try in the first five minutes and we came back to win 24-19.”

Keisar and Joziah said their season record reflects their team spirit. After putting behind the disappointment of losing narrowly to Mana College in the grading round, the players rallied together and formed a close bond.

“We have all played with each other before, and we knew each other’s strengths and all our hard work and team spirit came together and served us well throughout the competition,” said Keisar.

“We did have a lot of individual talent, but sides that came up against couldn’t really focus on any one player, because if they did someone else would step up and do something special.”

The immediate future looks bright too, with the bulk of the team returning in 2021 to have a crack at the Premiership division.

“About three quarters of our team this year was year 12, and we had two year 13s and three year 11s, so next year we should have a really good team.”

There are also three sets of brothers in the Upper Hutt College First XV.

Renata Kotuhi is year 13 and brother Keanu is year 12. Renata started the season at fullback and after injuries to Mahuri-Tukukino he moved into the First XV and Keanu played halfback in the First XV throughout the season

Captain Tamiti Chalmers-Miller and Zion are brothers, Tamiti is the older brother and plays blindside flanker and Zion is a lock.

Matiaki Palu is also a lock and younger brother to wing Sifa Palu.

Rugby is the main winter sporting focus for most players, but few rugby players also play in the school’s Premier basketball team, including Ben McEvoy who played his100th First XV game for Upper Hutt College in the final. As well as basketball, he has also previously played First XI football.

Photos from the Premier 2 final here: