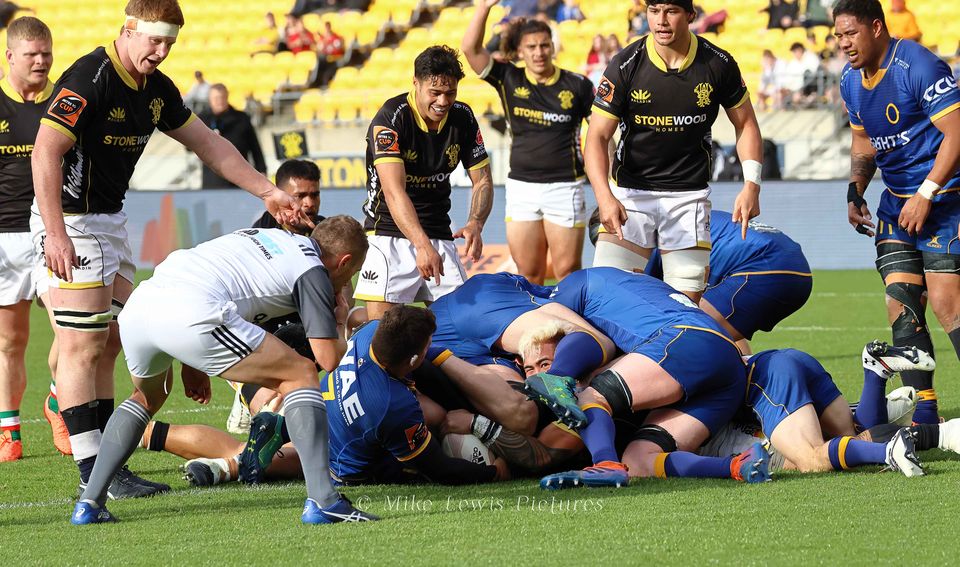 Above: Alex Fidow scores a cheeky try for the Wellington Lions on Saturday. More photos from this game HERE

Following two consecutive last-gasp losses to South Island rivals Canterbury and Otago, they have slipped to fifth (see table right) on the standings with two wins and three losses from five games.

But there are still five games left, so, much like their indifferent start to the 2000 season, they can still come roaring home to win it. This weekend they host North Harbour at Wellington Stadium at 2.05pm on Saturday. But if they lose this, they can probably start thinking about their summer break.

Elsewhere, the Wellington Pride return from their bye to finish their 2020 season against the Otago Spirit at Porirua Park on Sunday at 12.05pm.

In other rugby played on Saturday, the Wellington Centurions U18s travel to Napier to play the Hawke’s Bay Saracens U18s in a one-off representative fixture.

In Masterton on Saturday, the Hurricanes Youth Council hosts their annual Hurricanes Schools 7s tournament. This is all day at Rathkeale College and has attracted a full field. We will preview this tournament later this week.

Former Wellington Lion and current Northern United (formerly Tawa) loosehead prop Tolu Fahamokioa made his debut for Waikato on Saturday in their 36-13 win over Counties-Manukau.

The 2021 Hawke’s Bay 7s tournament at Central Park, Waipukurau, is on 13 February 2021. Interested in attending? Email:

Fifita’s been with the team since 2015, when he made his debut against the Blues in Auckland.

Since then, the Tongan-born loose forward and lock has gone on to play 67 games for the Super Rugby franchise, whilst also becoming a stalwart on the provincial scene for the Wellington Lions.

“I am incredibly proud to be part of the Hurricanes and to have the chance to live out a childhood dream and play for the club I grew up watching. The people at the club make it a special place to me and I feel privileged to continue my journey here,” said Blackwell.

Blackwell has played 36 games for the Hurricanes since his debut against the Sunwolves in 2017.

The Wellington Lions were wearing their club socks on Saturday, so it must have been WRFU Old Timers’ Day?

So the All Blacks dodged a Hodge at the end of their Bledisloe Cup Test yesterday. Except it wasn’t the end, as the match kept going at a frantic pace for another four minutes before its conclusion, making it a Fozzy start to Ian’s era.

Two average teams who will surely improve for the return match this coming weekend in Auckland. The Wallabies will have their work cut out for them to win at Eden Park, but if they can spend their week working on their breakdown technique then who knows?

There have been eight draws in Tests against Australia, these being:

Sunday’s draw was the first time ever that the All Blacks have drawn two consecutive matches at the same venue (and with the same score too against South Africa in 2019).

Wellington tops the charts with five draws in 68 matches (Athletic Park and the Stadium combined).

Christchurch has no draws in 52 matches across all venues there.

It took only two matches to get a draw at Athletic Park but 20 at the Stadium.

Included in the five draws in Wellington is one of only two 0-0 draws (the other being Edinburgh in 1964).

Congratulations to Peter Umaga-Jensen (Wainuiuomata) for joining the All Blacks squad last week. He was sideline at the Test yesterday.

Six tries for Portia Woodman for Northland against Taranaki in the Women’s NPC on Sunday. Draws & Results HERE

Some more Wellington clubs having their end of season awards.

Isaia Petelo won the Marist St Pat’s Sportsman of the Year title, for the second time and six years after his first win in 2014.

Several other clubs (on top of the ones we featured here last week) have also had their prize-giving, but their winners remain a secret as of Monday morning.

Insights from the 2020 National Sport Club Survey (NSCS) are now available. Over 1,100 sport clubs responded across 80 sports and all 17 regions of New Zealand.

NSCS data indicates that many more sport clubs are losing money in 2020 (11%) than were in 2019 (5%). A higher proportion of clubs connected to New Zealand’s most traditional sports like rugby, cricket and netball report being “hit hard” by the impact of COVID-19 (15%) compared to other team sports (6%), primarily individual sports (4%) and racquet sports (3%).

Further, less clubs from traditional sports indicate they will “shortly be back to normal” (31%) compared to other team sports (46%), primarily individual sports (49%) and racquet sports (56%). Fewer Auckland sport clubs anticipate being shortly back to normal (38%) than other regions of the country (up to 65%).