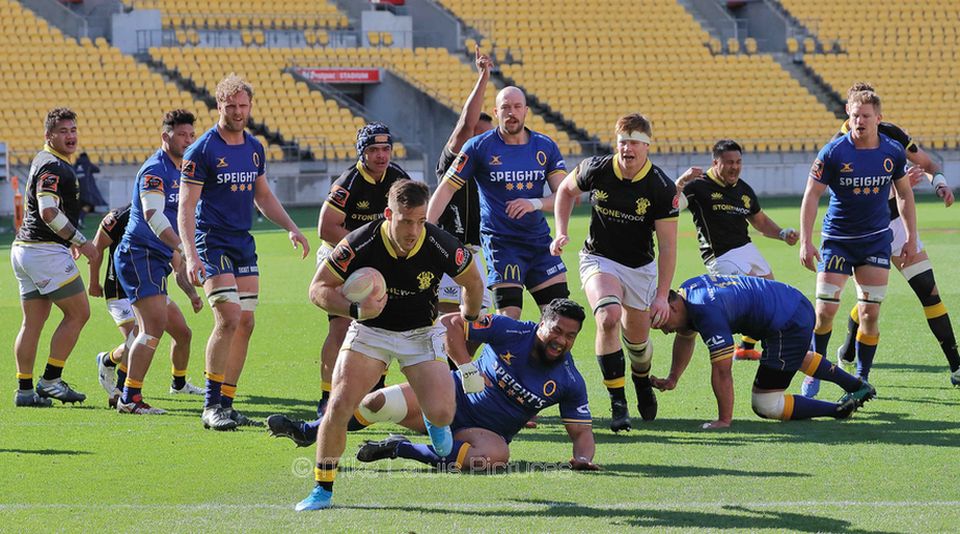 A hat-trick for Wes Goosen last year against Otago, and seven tries in four games against them.

Stat attack below by Peter Marriott.

It’s a match dripping in history and Wellington will also be defending a coveted trophy when they play Otago this coming Sunday at Wellington Stadium.

When Otago and Wellington met at Wellington on 24 July 1883, it was the first clash between a North Island union and one from the South Island, and Wellington’s first official game.

This Sunday the two teams are playing their 119th game against each other and also playing for the Mike Gibson Memorial Trophy.

Gibson was a popular and dashing centre and wing who played for both Wellington and Otago in the 1980s, before dying of Leukemia, aged 27. He played three seasons for Otago, and one full season in Wellington and for the Lions before cancer struck and he passed away the following year in 1988.

In his honour, Gibson’s Bay of Plenty-based family commissioned a trophy to be played annually between Wellington and Otago and his parents and several family members brought it down to present it to the inaugural winner. The trophy was carved by Winiata Tapsell, a grandson of Winiata Tapsell who played for New Zealand Maori against the Springboks in 1921.

Going into this Sunday’s Wellington has played Otago 42 times previously in the NPC competition, with Wellington winning 24 (57.1%), losing 16 and drawing two of these.  The results of those matches are below.

Wellington won its first eight NPC encounters with Otago between 1976 and 1983, but Otago beat Wellington in eight out of nine successive encounters between 1990 and 1998. The other match was drawn.

Wellington has hosted Otago on 22 previous occasions and the results of those matches played in Wellington are:

As above, Wellington has won 14 times to Otago’s seven. There has been one draw.

Wellington’s 68-7 win in 2007 was the highest score and biggest margin ever recorded against Otago by any team.

Wellington won this match last year 54-24, by a margin of eight tries to four.

In 2018 Wes Goosen scored two tries inside the first 10 minutes as the Lions got off to a cracking start on their way to winning 34-16.

Goosen also scored hat-trick in last year’s win, and has scored seven tries in four games against them.

His hat-trick last year was just the second by a Wellington player against Otago after Matt Proctor’s hat-trick in 2012. Chainsaw (not the photographer) Laney scored three tries for Otago against Wellington in 1998.

Whilst Wellington is coming off a 26-31 loss to Canterbury, that in previous years would have been a draw, Otago enters this game after a demoralising defeat to Hawke’s Bay by 9-28 that saw them relinquish the Ranfurly Shield only a matter of days after they won it off Taranaki.

Wellington has conceded 49 drop goals in all NPC matches played since 1996 but has not done so since 2011, against Manawatu at Wellington.

In all NPC matches against Otago, Wellington has aggregated 993 points made up of 130 tries, 95 conversions, 65 penalty goals, and two drop goals.

In all NPC matches against Wellington, Otago has aggregated 874 points made up of 96 tries, 66 conversions, 90 penalty goals, and six drop goals.

Wellington has scored four tries or better in NPC matches against Otago on 17 occasions, including 11 times at Wellington, and in the last five matches in a row.

Otago has scored four tries or better in a NPC match against Wellington on seven occasions, including last year when they played in Wellington.

Wellington has scored four tries or better in NPC matches against Otago on 17 occasions, including 11 times at Wellington, and in the last five matches in a row.

Otago has scored four tries or better in a NPC match against Wellington on seven occasions, including last year when they played in Wellington.

Wellington’s record for most tries scored in a NPC match against Otago is nine, at Wellington in 2007.

Otago’s record for most tries in a match against Wellington is 12, at Dunedin in 1998.

Wellington has won their last seven matches at home including all six played in 2019 and the one played against Bay of Plenty last month.

This season Otago has won both away games but lost their two at home, including the last one against Hawke’s Bay when they surrendered the Ranfurly Shield after holding it for just seven days.

Vince Aso is the top try scorer for Wellington this year with three tries.

Jackson Garden-Bachop is the top point scorer for Wellington this year with 30 points.

A total of 33 players, including eight debutants, have appeared in at least one match for Wellington this year.

Julian Savea has scored in each of his two previous matches against Otago. He scored two tries in 2010 and one in 2017, the third and last time he captained Wellington.

In 118 first-class matches overall since their first clash in 1883, Wellington has won 64, Otago 45 and nine have been drawn.