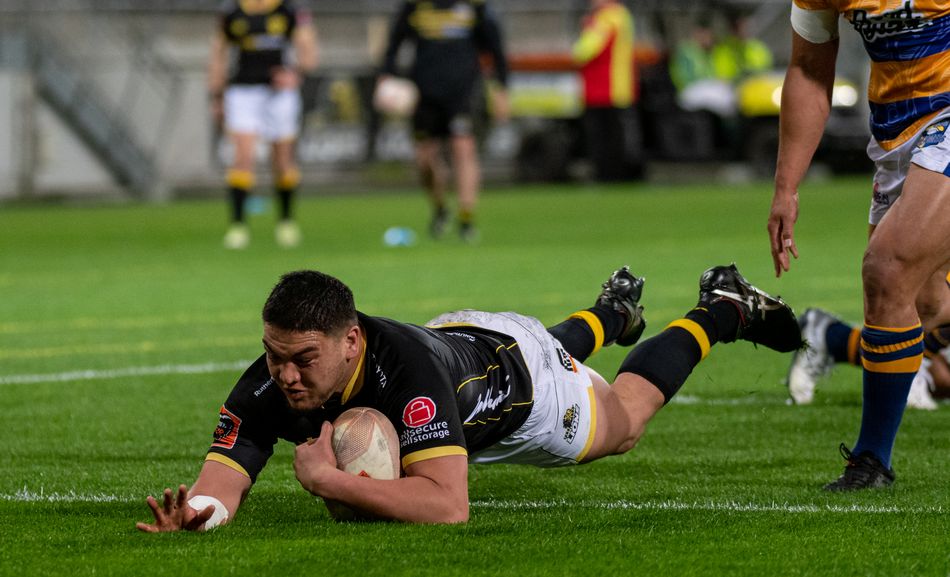 Above: Tyrone Thompson scores his maiden try for the Wellington Lions. Photo by Tom Minton.

The Wellington Lions beat the Bay of Plenty Steamers 32-10 when they met on Friday night in Wellington.

Some statistics from the game, in association with Peter Marriott, are below;

Wellington has scored 32 points in a NPC match on just three occasions. The last time they did so was against Southland at Wellington on 24 September 2009. Or, one day short of exactly 11 years ago. Wellington won that match 32-13.

For the record, Wellington has had 13 points scored against it more times than any other total: on 30 occasions.

Wellington has beaten Bay of Plenty in their last eight matches in succession.

The Capital has  dominated various teams since the NPC competition was established in 1976 but none more so than Taranaki which Wellington beat 17 times in a row between 1990 and 2008. Wellington also has a sequence of 15 consecutive wins against Southland (between 2003 and 2018) and another long one against Bay of Plenty: 12 in a row between 1977 and 1989. Other sides to have succumbed
to large losing sequences are Northland (12 and nine matches on separate occasions), Manawatu and North Harbour (10 times each), and Hawke’s Bay and Otago (eight times each). Needless to say  Wellington has never beaten Auckland more than twice in a row (including their last two encounters), they have won four in succession against Canterbury (twice), and four in a row twice against
Waikato.

Bay of Plenty scored the first points: a try to Nathan Vella, after just 33 seconds.

Wellington kept Bay of Plenty scoreless in the second half.

Bruce Kauika-Petersen and Ruben Love both made their first-class debut for Wellington. They brought the number of Wellington debutants in 2020 to eight. A total of 32 players have now made at least one appearance for Wellington this year.

Ruben Love came off the bench after 66 minutes and scored a try at the 80 minute mark.

Xavier Numua was awarded a yellow card: the first for a Wellington player in 2020. He did not return to the field after his 10 minute sin-binning finished with four minutes remaining in the match. It was his first match of the season. Wellington received no yellow cards in 2019.

Josiah Tavita-Metcalfe started his first match, his only previous appearance having been off the bench.

Tyrone Thompson also started his first match. He had appeared twice previously. He scored his first try for Wellington.

Kemara Hauiti-Parapara started his first match after TJ Perenara was made unavailable due to his All Black commitments.

Teariki Ben-Nicholas scored two tries in a match for the first time. He is the 91st Wellington player to achieve this in a NPC match and now has a total of five tries to his name.

Wes Goosen also scored a try, his fourth against Bay of Plenty.

Jackson Garden-Bachop’s seven points in the match took his overall tally in matches against Bay of Plenty to 44. After Wellington’s first three matches this year he is the top point scorer with 24 points.

Garden-Bachop, along with Vince Aso and Du’Plessis Kirifi, are the only players to have been on the field for every minute played so far this year: 240 minutes.

Du’Plessis Kirifi made his Wellington debut against Manawatu at Palmerston North in August 2017. He appeared in 15 matches before being given the Captaincy, against Tasman, in the first match of last year. He has now led the side for the last 15 matches in a row and his record is 10 wins (66.7%), four losses and one draw. In the 12 matches played last year he was on the field for all but 20
minutes!

Bay of Plenty’s side included two players to have played Premier club rugby in Wellington in 2020, these being: Chase Tiatia (Hutt Old Boys Marist) and Kane Leaupepe (Johnsonville).

The match card was:

Stat Attack: Key match for the Lions against North Harbour this weekend