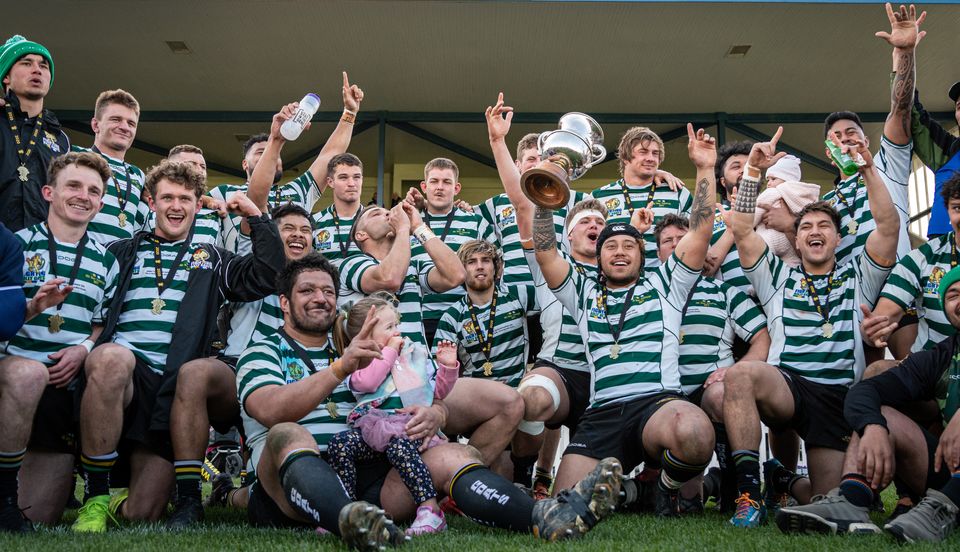 OBU sides won both finals played on Petone #1, winning the coveted Jubilee Cup and the Colts John E Kelly Memorial Cup deciders. OBU beat Norths sides in both these finals – prevailing 24-13 in the Colts decider and then winning 22-14 in the Jubilee Cup Premier finale that followed.

Wainuiomata won the Hardham Cup, holding off the Hutt Old Boys Marist Eagles 17-15 in a spirited performance in a tight and willing match between the two Hutt clubs.

Despite finishing fourth in the Swindale Shield, Old Boys University are once again the Jubilee Cup champions, dethroning reigning premiers Norths 22-14 in the final.

The first-half was played at breakneck speed as both sides showed an eagerness to keep the ball and stretch to the flanks. After early jousting, it was OBU first-five Dale Sabbagh who opened the scoring with a penalty from 40-metres out.

Diminutive fullback Sam Reid was tied for the lead in the Billy Wallace Best & Fairest Standings prior to the final. He enhanced his cause for outright honours when he scored the first try of the game . A stable platform from a midfield scrum, 40-metres out, saw Callum Harkin pierce through the midfield and release the little flyer who dotted down for his 13th try of the season. Sabbagh converted from out wide to make it 10-3.

Fullback Johnny Teleaga celebrated his 100th match for Norths with repeat breaks throughout. In what was a metaphor for Norths fortunes, however, two busts in two minutes from the veteran both went unconverted in the right corner.

After about 25 minutes Teleaga unselfishly passed to his wing Junior Time-Taotua when he could have completed the job himself. Moments later from a blindside ferret saw the ball find land instead of hand.

Sabbagh was named the Jim Brown Memorial Medallist as Player of the Final. He pulled off two try-saving tackles in the second-half and guided his side around the paddock with authority. However, it was a quick dummy and dash on halfway that provided his biggest moment. Sprinting 30-metres clear, support from lock Taine Plumtree put the exclamation mark on the try of the match. Sabbagh’s conversion had the Billy Goats 17-3 ahead at the interval.

Norths was resurgent after the break with Sam Clarke converting two out of three penalties to reduce the deficit to 17-9. Matters appeared to improve further for Norths when OBU hooker Kenan Gillison was yellow carded. However, a lack of discipline enabled OBU to venture back inside Norths territory and lock James Poloniati hurdled over a pile of bodies for a try to make it 22-9.

Clarke, Luke Bowden and Luca Rees should have all converted clean breaks by Norths but the expression ‘one of those days’ applies to an unusually careless display.

With about five minutes remaining replacement wing Te Kahui Bishop crossed in the corner but when the conversion attempt slipped by, Norths chances had evaporated.

Norths openside Bruce Kauika-Petersen was full of hustle but subdued when compared to his influence in previous outings. Kienan Higgins is never afraid to try something different and Esi Komaisavai added spark from the bench.

If OBU props Finnbarr Kerr-Newell and Jonathan Fuimaono are the old guards in the student’s success, then flankers Tiaki Fabish and Josh Gimblett are the new hotshots. The Napier pair tackled themselves to a standstill and carried vigorously. Izzy ‘Fortress’ Foai contained his dangerous opposite Losi Filipo and gave more piggybacks to defenders than a clown at Christmas party. Sabbagh shouldn’t have to pay for a beverage at the Cambridge tonight.

Despite being the lowest qualifier for the decider, OBU beat all the top four sides in 2020.

UPDATED: The Hardham Cup that followed was a mostly scrappy affair, both HOBM and Wainuiomata guilty of throwing away momentum and conceding too many turnovers and penalties.

Consequently, there was just one try scored in the first half and the Eagles went up 7-6 at the turn.

Wainuiomata started the final with vigour and went close to running an early try on more than one occasion. Their reward was two penalties to second five-eighth Tyler Tane, to go 6-0 up with more than a quarter of the game gone.

Playing into a dying wind, the Eagles rallied and dominated territory and possession for most of the rest of the first half. Like Wainuiomata, they went close to scoring but were thwarted by desperate defence. On one occasion the forwards picked and drove at the whitewash for two minutes only to come up empty handed.

Finally, the dam broke. After a penalty and lineout in the far corner, tighthead prop Rei Manaia and three other forwards had dabs at the line, before the Eagles went wide through the backs across the posts and centre Tomasi Alosio laid on the final pass to the waiting Fereti Soloa on the wing to score.

Both teams advanced their scores with penalties after halftime and HOBM led 10-9, before Wainuiomata scored the decisive try of the final.

From an attacking scrum in centre-field, Wainuiomata second five-eighth Tyler Tane punched hard at the line, Wainuiomata recycled possession and openside flanker Sam Smith crossed for the try that put them up 14-10.

Wainuiomata second five Tyler Tane kicked a penalty to extend this lead to 17-10, asking the Eagles to strike back twice to win.

The Eagles regrouped and scored their second try of the match, counterattacking from halfway after a Wainuiomata hack down field off a spilt ball. First five-eighth Pakai Turia started the play from 40 metres out and three phases later centre Alosio grubbered behind the advantage line for their backs to re-claim and then from the next play replacement back Fritz Ryasi ran in to score.

The conversion from 15 metres to the left of the poles was missed, and Wainuiomata held a 17-15 lead.

Ahead 10-5 at halftime Norths was restricted to a solitary penalty in the second-half as the students used the breeze, staunch defence, and a superior scrum to suppress an outfit that had scored 446 points in nine prior fixtures this season.

OBU scored the first try when lock Dominic Herlihy merely fell over the line after the entire Norths pack splintered from a scrum.

Norths slowly grew in stature with captain and centre Misi Faimalo at the forefront. He threw a majestic skip pass to Tana Tusa to open Norths account and just before halftime set fullback Luke Kapene free down the grandstand touchline. A chip, chase and tackle earned Norths a five-meter scrum and then the same pair combined again with Kapene scoring after a spectacular dive in the opposite corner.

OBU fullback Sam Champion kicked a 40-metre penalty to close the gap to 10-8 only for Faimalo to respond shortly after the kick-off. Champion was on range again from 25 meters out as the score was 13-11 with half an hour remaining.

The pressure of the OBU scrum, and some intelligent tactical kicking, gradually wore Norths down. The Norths attack became individual and inaccurate. Champion kicked two more penalties from four attempts while the students second-half try was scored by Isaac Wilson, a moment of real quality completing a blindside break by fellow wing Josh Morgan-Ranui.

Oskar Lynch, Liam Zinzley and Tom Hoskin were outstanding in the back row for the Billy Goats while Luke McGill tried hard in a beaten Norths pack

Marist St Pat’s won Premier Reserve Ed Chaney Cup title with a 25-13 win over Northern United in their final in the early game on Petone #2.

Two long-range tries scored in the space of five minutes early in the second half took the game away from top qualifiers Norths, extending a 12-10 lead to 22-10. MSP then did enough over the remainder of the match playing into the wind to win.

Norths had come back right back into the contest with a sweetly struck try just after halftime, running a five-pointer in from a first phase scrum.

Momentum appeared to be with Norths, but the master himself, Fa’atonu Fili was instrumental in both sweeping movements to help score their two second half match-winning tries. Evergreen first-five Fili would add a penalty with the final play of the game to ensure the Ed Chaney Cup stays in the MSP trophy cabinet for another season.

The opening 20 minutes of the final had seen the unbeaten Norths side bring its power game to the table, with a bigger pack and dominant scrum, but the tenacious and mobile MSP withstood the charge and threw caution to the wind to score tries in the 20th and 25th minutes and go 12-0 up. Both were after long build-ups and the second was scored after a Fili cross-kick to his waiting wing.

Norths struck against the run of play when blockbusting left wing Liki Siliga scooped up a MSP dropped ball near the touchline and galloped 60 metres to score to close the gap to 12-5 by the break.

This remained the final score, as Tane was unsuccessful with two long-range shots on goal in the final 10 minutes.

In the final against neighbours St Pat’s Silverstream, Upper Hutt College led 10-5 at the interval.  Silvestream levelled to 10-10, before Upper Hutt scored twice more in the last several minutes to win 22-10.

MSP and Paremata-Plimmerton big winners in fifth round matches